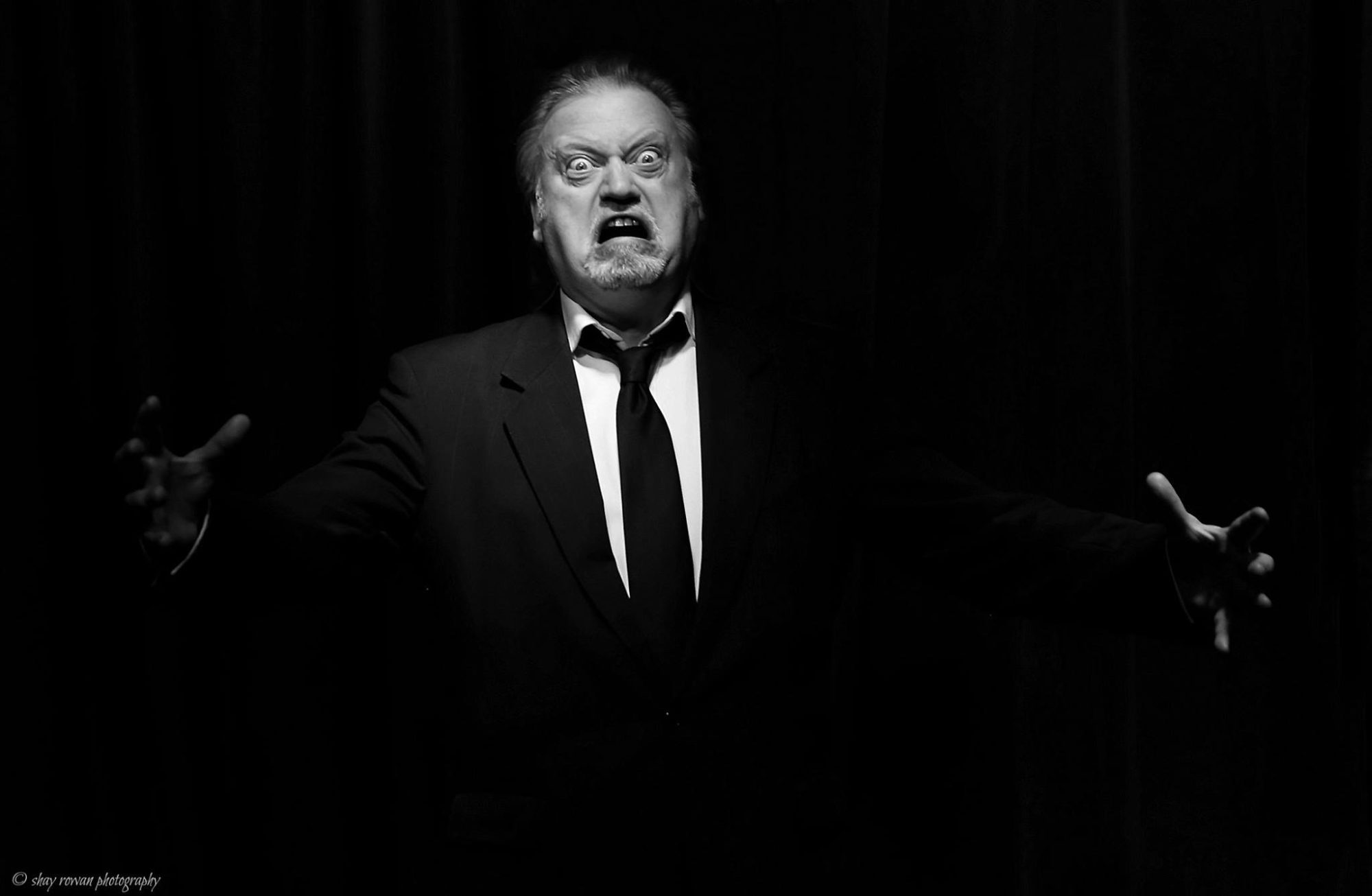 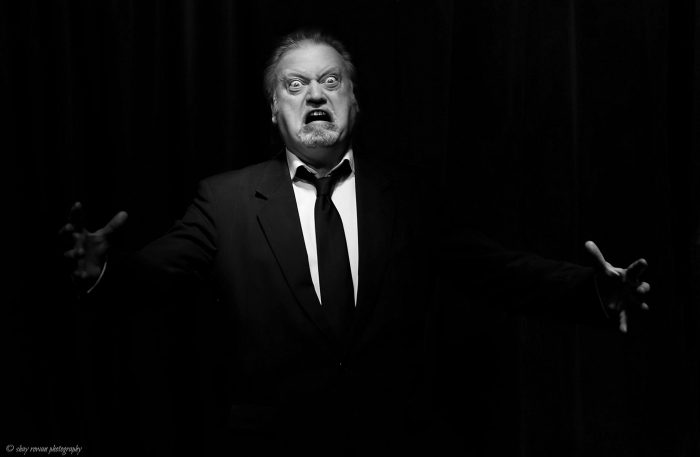 Brian Gorman brings together a brilliant balance of the iconic with the ironic for a punchy performance of ‘One Man Bond’ – acting every James Bond and array of characters, in just over 60 minutes. Louder Than War’s Emily Oldfield went to watch…

Intense? Yes – but in an electrifying way. Brian Gorman takes to the stage with real animation, not just imitating but in a way embodying every Bond character he takes on – from the simpering of Miss Moneypenny, to the mannerisms of Roger Moore’s Bond.

Written and acted by Gorman himself, with direction and production from SM Worsey, this is a creative combination which maintains a skilful balance of vocal agility with accessible humour. The transition between all 24 films is well captured too; Gorman giving gravitas with a vocal trill introducing the title of each one.

The pace of the performance at times borders on the manic, given the sheer ambitious nature of the undertaking – but it is incorporated into part of the experience – well-sustained considering it was the first public show.

An experiential allure is after all preserved as not only is Gorman capable of conveying character but is a talented impressionist – adding sound effects like ‘whack’ and ‘biff’, to both parody and applaud the inevitable Bond action scenes.

Gorman indeed strikes the balance so well – he affectionately adds irony to expose the ‘routine’ nature of some of the Bond moments, whilst still ce 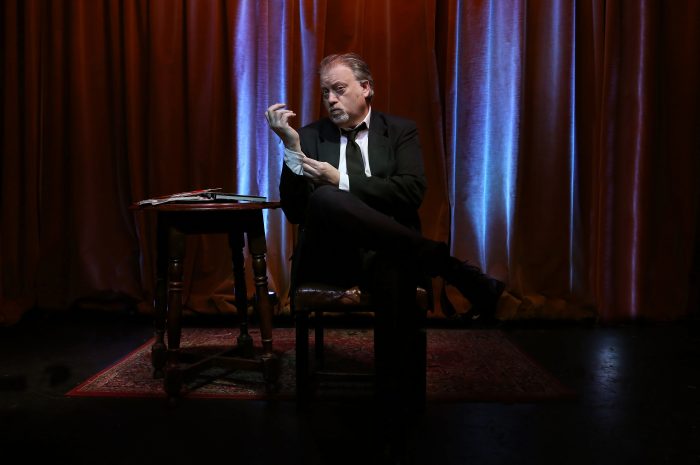 lebrating the material.
It’s a show clearly compiled with real dedication and skill, with Gorman watching the films repeatedly in order to collect the juiciest material. Picking what will appeal to a contemporary audience from such an extensive back-catalogue and incorporating it into an hour-long script certainly is no easy task, but something Gorman has done with close attention to the entertainment value.

On the night, comedy just kept on flowing as Gorman guided us from Bond to Bond – bringing in occasional, effective props – take an oversized stuffed parrot and a bottle of vodka, for instance. This maintained the eccentric, imagistic nature of Bond: with the so-called ‘sex scenes’ – a pantomime of petting and kissing with just an invisible recipient – growing increasingly hilarious. Think a cross-between a child’s horror at seeing their parents kissing and the comic desperation of a drunken snog. Stay classy, Bond.

But to comment on the clever hilarity of ‘One Man Bond’ is not to overlook the evident skill that has gone into its execution.

From capturing particular body sets and vocal ticks, to jumping between characters with no visual aid, Gorman still manages to maintain an individuality which makes the show enjoyable for those less familiar with the Bond series. For Bond fans, Gorman’s show may seem like an in-depth and insightfully ironic exploration, whilst for onlookers, it’s a creative cacophony of characters which keeps plenty of fun at the core.

This was a show stronger in its first part – with the transition between characters tight and slicker. In the shorter second part of the show, the performance was still punchy, though areas of pause were needed to allow Gorman to gain his breath back.

A performance that leaves the actor on the edge of consciousness out of the sheer love for what he does really is stand-out though – and how he even made slight slip-ups part of the comedy just added to the adventurous experience.

I left notably shaken (with laughter), rather than just stirred, let me tell you.

There are a number of upcoming shows so you can experience One Man Bond for yourself – including dates in Oldham and Chester. You can also find out more about the work of Brian Gorman – who has written various pieces including ‘New Dawn Fades’ (reviewed in Louder Than War) a play about Joy Division and Manchester – here.

Photography: With great thanks to Shay Rowan (Images 1 and 2) and also Georgina Robinson (Image 3) 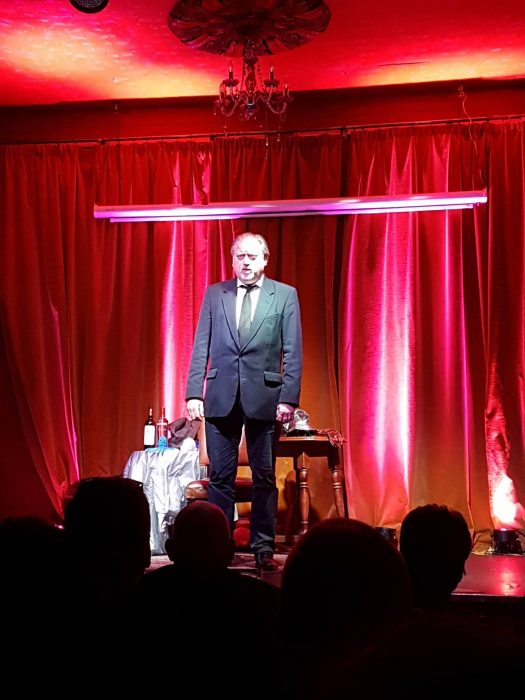