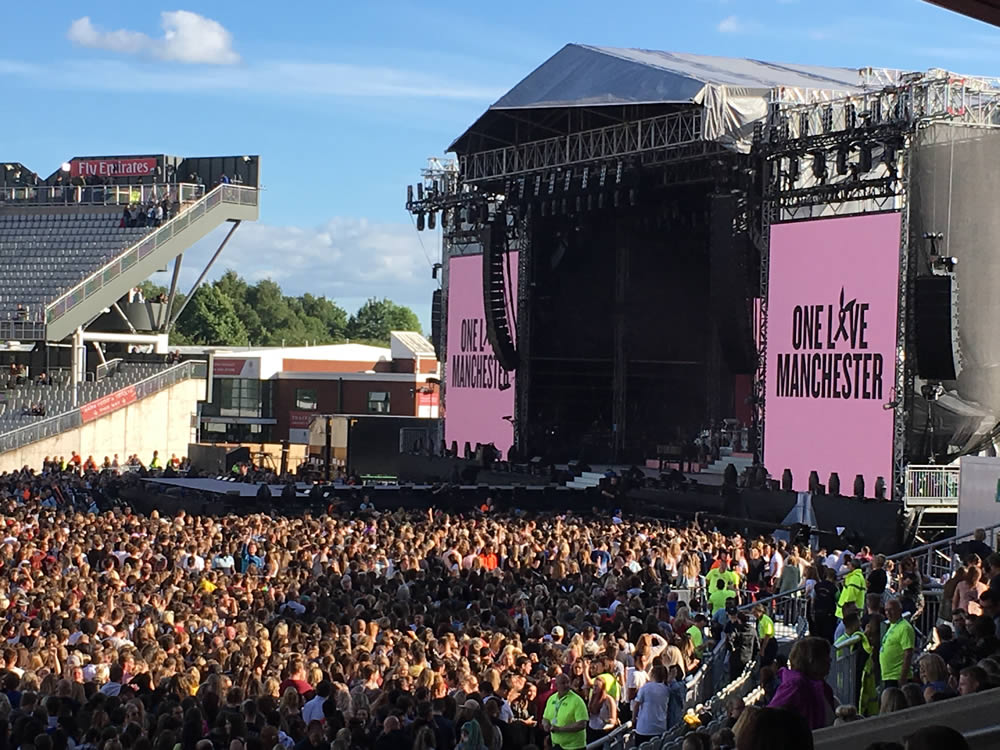 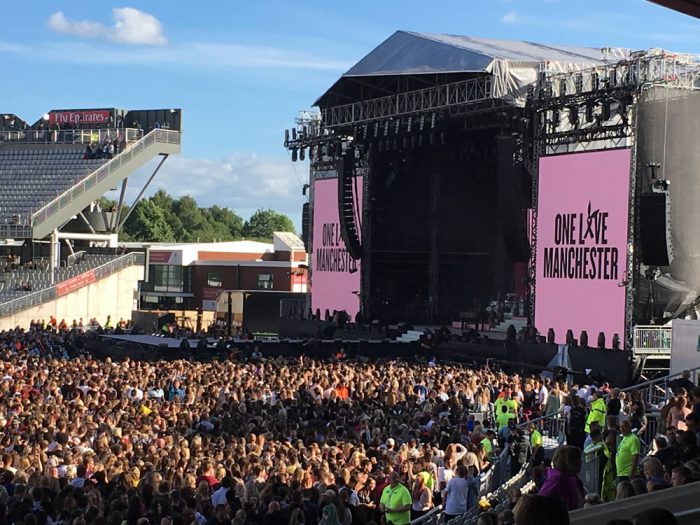 Ariana Grande put on a heartfelt mega show in Manchester following the Manchester massacre two weeks ago. Nigel Carr reports back for Louder Than War.

Getting off the tram at Old Trafford there is a huge police presence. Special Ops guys with assault rifles strategically pointed downwards. Police horses with smiling policewomen. As heavy as it looks, there is a great feeling, a mixture of excitement and apprehension. The forces have surrounded the venue but with smiles and selfies there’s a real sense of togetherness.

Coming through the gates is like boarding an aeroplane with hand held scanners and ’empty your pockets’ everything is scrutinised, all bottles confiscated and all bags emptied. The guy frisking me flew down from Glasgow this morning. When they say they ramped up security they meant it! 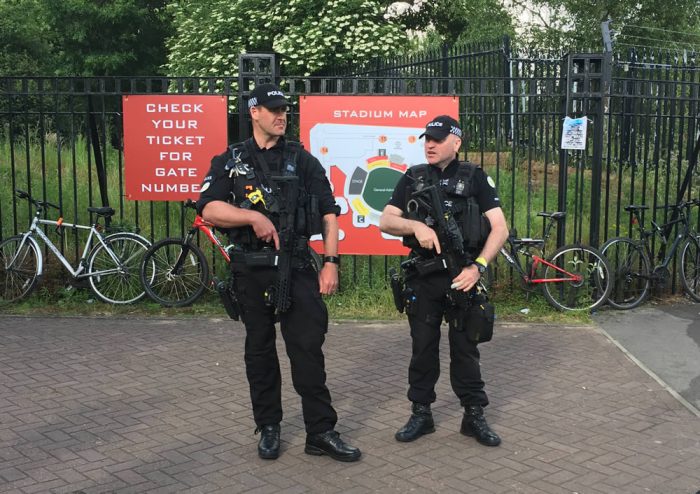 After a speech from mayor Andy Burnham followed by a minute’s silence which is strictly adhered to, Tony Walsh takes to the vanity thrust to recite his poem for Manchester. Never has it felt so poignant and the crowd responds appropriately. Marcus Mumford takes to the stage to call a minute’s silence before playing an acoustic You Are Not Alone In This.

Take That are next with Let it Shine followed by Giants and Rule The World and the crowd are on their feet. The screams are truly deafening. Robbie Williams is next with an a Capella version of Strong which has the whole crowd singing along. The guitar comes in and the lyrics appear on the screens – it’s now “Manchester, we’re strong, we’re strong”. He follows this with Angels and suddenly I’m feeling emotional – maybe it’s the cider, a hackneyed old song like this? The whole crowd knows the words of course – and it’s my brother Ian’s favourite song, he sang it at my daughter’s wedding for fuck’s sake!

Pharrell is up next with Get Lucky – an amazing track with a rapturous reaction. He notes quite rightly that what he doesn’t see here is fear and of course he’s spot on. He’s joined on stage by Miley Cyrus for Happy. He leaves her and after a long speech where she wants to ‘wrap my arms around you’ she sings, Inspired. It’s rather unfamiliar to me obviously, but people are clapping along. Niall Horan is next up playing a cool acoustic number, Slow Hand, which I only heard on the radio today followed by This Town.

I’m in the middle of the stand where those that had bought tickets for Ariana Grande last week are standing. It’s no surprise then that I’m nearly deafened when she comes onstage! I am no expert on this kind of music but it’s punchy and her dance routines are great! It’s hard to know what to say really. She’s been visiting some of the victims of the bomb, one of whom is the daughter of a family friend who is still in hospital. Whatever you think of the music how can you diss the heart of the person singing it? Visually moved she ends her short set with an explosion of streamers in to the crowd. 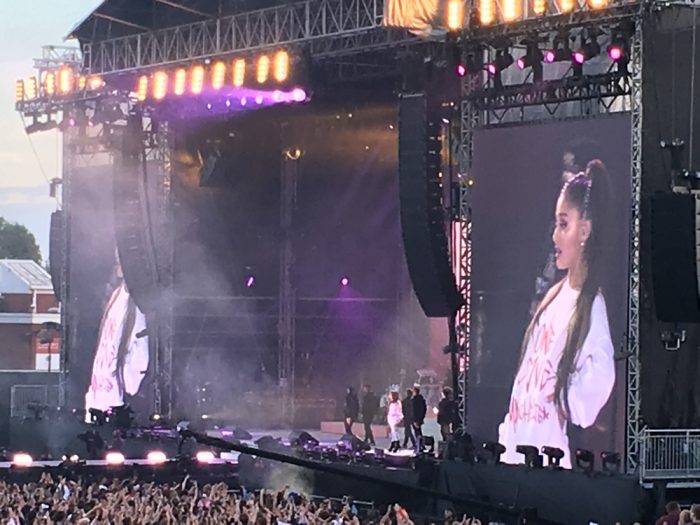 Little Mix up next with Wings and whilst I am no fan and know nothing about them, I have to say that Jesse is looking particularly svelte these days.

Ariana does a brief duet with Victoria Monet on Better Days before The Black Eyed Peas take the stage and whack into Where is The Is The Love, sans Fergie, but Ariana fills the gap. Frankly, and I know I’m blowing my credibility, but it’s just great to see Will i Am on stage in Manchester even if it’s only for five minutes!

Imogen Heap does a very moving piano rendition of Hide and Seeks followed by The Children’s Parrs Wood High School Choir singing My Everything with Ariana. She hugs the lead singer towards the end which is very touching.  Ariana duets with her boyfriend Mac Miller for far too long, but I guess for once we can forgive her. The duet with Miley Cyrus, a cover of the Crowded House song Don’t Dream It’s Over is just great.

Katy Perry struts on stage in a white feather boa coat looking pretty cool with a blonde cropped haircut. Part Of Me, of course I’m grateful that the young girl next to me knows all these songs! Annie’s It’s A Hard knock life segues in to Roar and the crowd know all the words.

Justin Bieber and now you’re stretching my tolerance but he’s here. Love Yourself is played on acoustic and it’s one mass singalong. I’m surprised how proficient he is on the guitar to be honest and lets face it he’s got stage presence.

I won’t lie to you me and Coldplay have had a difficult time of it over the years. I’ve never quite got it but tonight well… Opening with Don’t look Back In Anger is a bit of a master stroke. Liam missed it from his set last week although the audience at the Ritz more than made up for it. They follow with James’ Sit Down which segues in to Fix You – touching and explosive by the close and they end with Rule The World; a mass singalong. 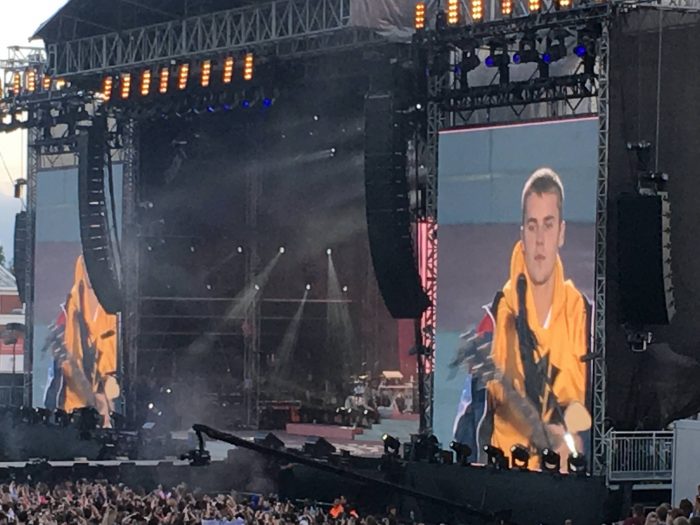 An unexpected Liam Gallagher sashays on to stage for Rock ‘n’ Roll Star followed by an emotional rendition of Live Forever. But for the second time in a week we fail to get Don’t look Back In Anger. Frankly though It’s just great to see Liam enjoying the crowds he deserves. Once again the fabled Noel collaboration fails to take place with Chris Martin filling in on guitar!

Ariana and the Black Eyed Peas whack out one more number before she closes with a highly emotional Over The Rainbow.

The overriding feeling from this event is the way that we all came together in defiance in many ways. We were cosseted of course. The security was immense but Manchester stood and sang together. Ariana held the event together – hats off, that’s all I can say, hats off to her and all who were involved.

I’ve seen another side of the music industry tonight and for one night only – aw fuck it, what a live experience? Just don’t dare pull me up on it!