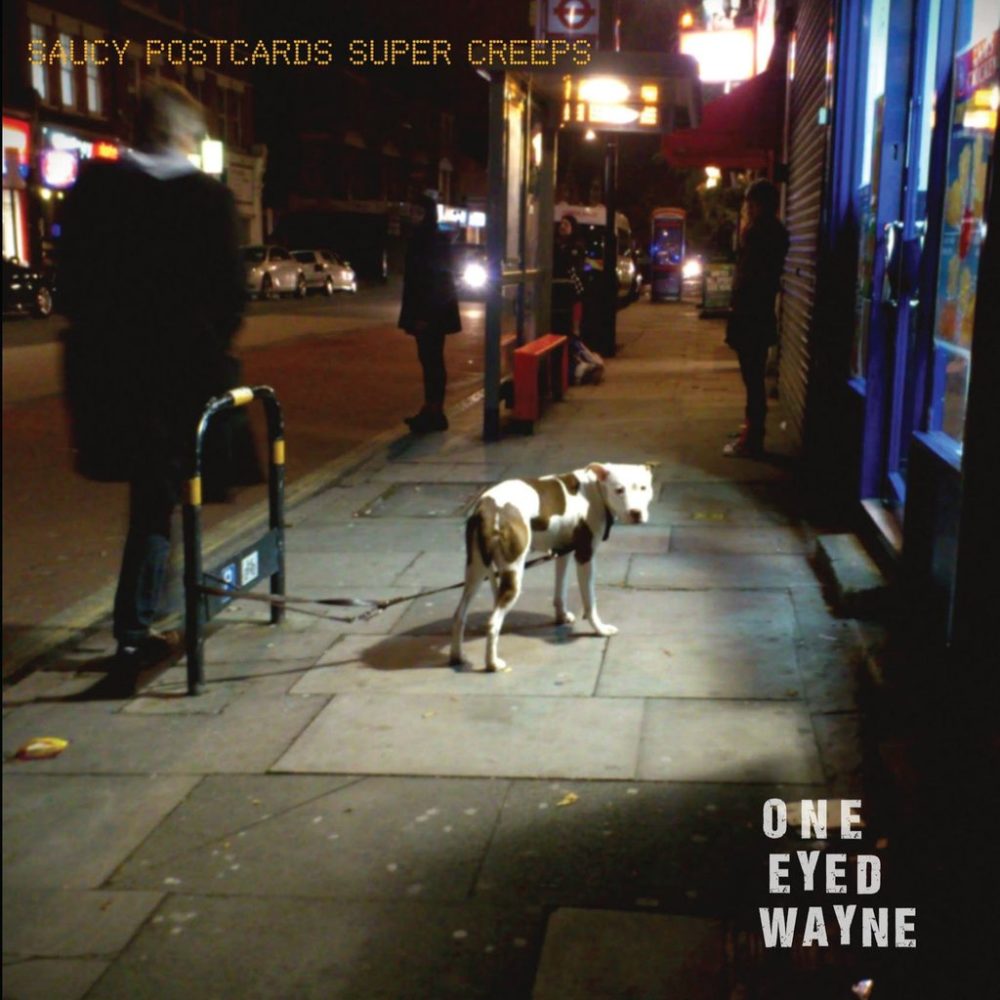 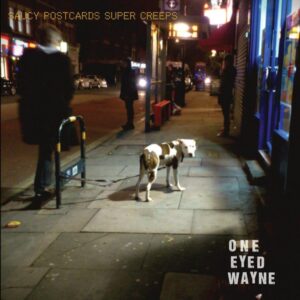 The follow up to 2016’s acclaimed Attack Of The Luxury Flats, One Eyed Wayne return an all-new second album. LTW’s Ian Canty attempts to keep up with the Waynes…..

Attack Of The Luxury Flats, the first One Eyed Wayne LP (reviewed here) was the perfect snapshot of the UK in 2016 in all its grimy and insane glory (if glory is the right word). Three years later and, if anything, the issues profiled on Attack have actually intensified. The world we live in is run by charlatans and fools. Making a quick buck is prized over all. And cruelty is the default setting for those that could actually wield power for good.

One of the good things about Saucy Postcards Super Creeps is that it doesn’t seek to merely reprise the first OEW LP in style and subject matter. Yes, singer Steve Donoghue (who is more than ably assisted by Pat Joslin on guitar and keyboards and the rhythm section of bassist Don Adams and Dean Leggett on drums, with all supplying backing vocals) still spins absorbing tales of urban life with all the disappointments, problems and moments of pleasure that entails. But, this time around, there’s a spring in their step, a real resilience in the face of the bleak outlook.

This I like because if there is one thing that has swamped culture in the last ten years it is the need for everything to be “dark”. One Eye Wayne are not dark. Bittersweet, maybe. Gritty, almost certainly. But not dark. The people and situations drawn in the songs feel utterly real, but there’s no phoney baloney demons to blame things on. On the whole the characters that populate the songs try to make the best out of the trying situations they find themselves in. Any guilt involved rests with those responsible for putting them in this position and a gallows humour is often necessary to deploy. Which is more or less how it is in real life and being able to portray accurately makes One Eyed Wayne special.

I’m tempted draw a comparison with Squeeze (though they don’t sound anything like them) in that their songs feel true to life and flecked with humour and good tunes. Like, perhaps, a musical version of a Woodfall film in three minutes flat. Anyway, enough of this guff theorising – let us check up on the contents included on Saucy Postcards…..

One of the joys of OEW is that they pick subject matter that is rarely selected by anyone else and that is immediately apparent with opening track Piece Of Romance. This song looks at the awkwardness and uncertainty of computer dating for the more mature person, the need for companionship somehow conquering the fear, but not making it anything less than uncomfortable. A great ringing guitar and lithe drumming give this tune a good momentum. The following number, 45 Minutes (To Go), references Bowie much like the album title, concluding sadly “Ziggy played guitar and took the Spiders back to Mars”.

Waste Of A Day has the perfect tired vocal to front a song about torpor, the guitars here are really good and make me think of Television a little. Both Yoyo and Spanish Lounge have some nice organ sounds, the latter with its “permanent holiday” topic reminding me of Pulling Mussels (From The Shell), a lovely summery sound with just that hint of desperation. Heart-stopping and evocative, this one is followed by another look at the problems faced with the passing of the years in Thousand Dreams. This time it is reformed bands trying to recapture their former glory in the spotlight, not always for the right reasons. But one of the things I love about One Eyed Wayne is that they are not needlessly cruel, they see things from all sides and I know if I was in financial dire straits and had that as an option to generate a bit of cash I would be tempted too.

The Body’s Gone is a slighter song, but is really catchy and memorable and the Man From Uncool shows the band’s inherent humour, poking fun at themselves and everyone else. Pickle again another more slight fun song, but it is followed by the far more sombre Neverborn. This track looks at the plight of the homeless and everyone’s complicity in the problem. Not an easy subject to write about and I would say Neverborn is one of the better musical offerings I’ve heard that address it. Finally, Old Man’s Balloons has a quite different sound than the rest of the record, more Music Hall Theatre. This is a downbeat meditation on the way media manipulates the “ordinary man/woman” for their own ends and the change in the music makes it have all the more impact. A fitting way to end this album, bringing all that’s wrong with 2019 into sharp focus.

Saucy Postcards Super Creeps is an excellent follow up to One Eyed Wayne’s first album and shows the band honing their skills. The songs are that bit sharper, the instrumental palette broader and the playing and production more sure-footed. This LP shows them fulfilling the potential that was promised on Attack Of The Luxury Flats. One Eyed Wayne are among the best at documenting modern life in the UK, on both a personal and national level. They do it in a very entertaining fashion too, with the necessary life experience to take a broader view. They’ve got something special worth sharing with you.