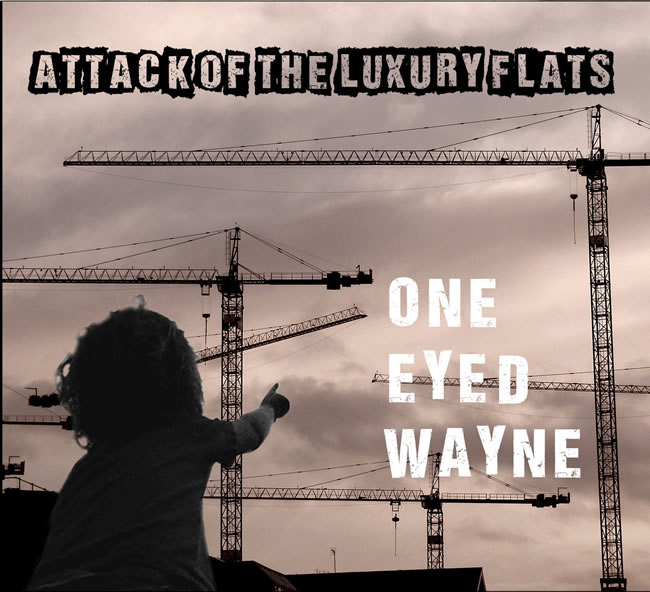 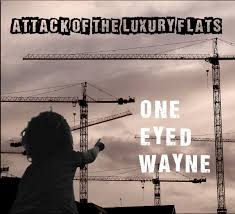 One Eyed Wayne – Attack Of The Luxury Flats
CD
Out Now

Debut album by the Hornsey based band, formed in 2014. LTW’s Ian Canty sees a downbeat, drizzle flecked post-Sleaford Mods portrait of the UK in 2016 graphically brought to life.

Reflecting “how it is” always presents some difficulties, in that you are automatically tying your music to a definite time and place, which can limit the appeal of your offerings to people living in different ears and cultures. But on the other hand there’s not much doubt that as the 21st century spins on in a tumult of insanity and society continues to teeter on the brink of total decay, someone has to document it. Why not the curiously monikered One Eyed Wayne?

Four men of uncertain vintage and mystery from the depths of Hornsey in London (paper bags on heads on the inner sleeve in a homage to the cover of New Rose? Or the Residents?). They grasp the nettle of “contemporary issues” by providing us with a cutting and breathless commentary on the minutiae of 21st Century life.

Sharing some ground with Art Brut and even the Libertines, they look also for inspiration further back with the incomparable Ian Dury also figuring in the lyrics both literally and in style.

On Attack Of The Luxury Flats they take us on a whistle-stop tour of Broken Britain littered with aspirational ad breaks that are designed to make you feel inadequate without the fastest car/broadband/loan, nightmare night-life scenarios and local amenities so run down they eventually are demolished and replaced with high-money yielding flats (which do nothing about the homeless problem btw).

The title track addresses the later issue adeptly and musically has echoes of early Nightingales in the guitars, which of course is a good thing. There’s a freewheeling hoe-down 1,2,3,4 which attaches a killer hook-line to a mash-up/pub crawl of the Psychedelic Furs and the Pogues and Various Artists has a Ghost Dance style skank wouldn’t be out of place on a later Madness album. This is a tale of drink dulling the feelings on a particular torrid night out with a nasty but great line in ‘He loved her so much he wrote her name in the shitter’, now that is romance!

In amongst biting social comment with have Tear Up, a knowing deconstruction of a failing love affair. Musically this tune is welded to a limping, listing ska-beat – this time recalling the great Baxter Dury rather than his dad. The spirit of Serious Drinking is in there too (on LSD, not an ode to drugs despite the title) a great forgotten band ripe for rediscovery, who specialised in similar beer-stain odes of regret back in the 1980s.

But One Eyed Wayne aren’t just the sum total of their influences, bringing their own jaded but sharp point of view across well throughout the entire album. If I was being “ultra-harsh Ian” I would say sometimes the lyrics could have done with just a little more work, but for the most part they hit the nail directly on the head to coin a cliché and work well in each song’s context.

The final ditty here What In A Moment, throws everything out of kilter, being an evocative look back to the Punk and Post Punk days. We might not know much about OEW but they obviously have long memories! Overall this is a promising debut record which casts a cynical but witty eye over present day Britain, beset by satellite television’s need to supply a steady line of untalented micro-celebrities to impose on the general public, boarded up pubs awaiting “redevelopment” and mind numbing insularism. One Eyed Wayne see clearly what is wrong and don’t have a problem letting us know about it, which is a good thing.