Home Music Bands On What Would Have Been John Peel’s 75th Birthday, News About The... 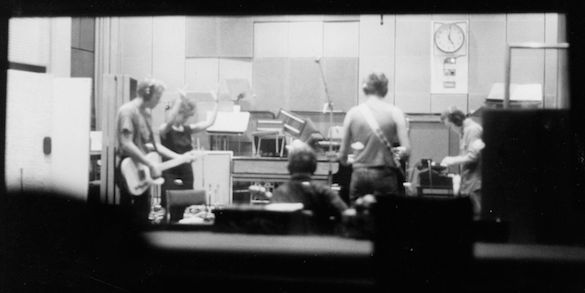 We could almost copy the intro to the That Petrol Emotion / The Everlasting Yeah story we’ve just run earlier today in again here: “As any self-respecting music fan will know today, is the birthday of John Peel. Or would have been if he hadn’t sadly been taking from us all several years ago. He’d have been 75 today. So it seems apposite that we’ve been awash with news about bands whose career’s Peel helped launch into the world. A couple of days ago it was the turn of The June Brides, two hours ago it was That Petrol Emotion and now it brings us great please to announce that Dutch indie rockers Eton Crop are coming back.
“We’re putting the band back together, Peelie. Thanx!”

Eton Crop owe a debt of gratitude to John Peel. He plugged their songs like hell and invited them to play FIVE John Peel Sessions. On the day the great man would have turned 75, Cropper Erwin Blom tells of the impact he had on his life. And the fact that the band is getting back together is all down to him – to play the Peel Regenerated festival on October 25 in Stockton-on-Tees.

And Eton Crop are looking for more gigs. Book them for October 23rd and 24th!

Erwin Blom explains what Peel meant to him:

“What The Fuck? Where is this sound coming from? Where is all this energy being generated?” Picture this. A spotty 16 year old, living in the Dutch village of Nieuwkoop, ear glued to his transistor radio. Somewhere he’d read about a thing called punk. Somehow he’d heard of a British DJ called John Peel. Because it’s impossible to receive BBC Radio1 via FM, the heavily distorted sound of long-distance Medium Wave is all he’s got. The signal keeps fading in and out, radio stations clash with each other on the air, but he’s happy. Because it brings a daily dose of energy into his teenage bedroom, a lifeline to the realm of punk light years away from his everyday world. The sound of freedom. When he hears The Sex Pistols, The Clash, Gang of Four, Pere Ubu, The Slits, The Specials, The Buzzcocks, and of course The Undertones, he thinks: “What The Fuck? Where’s this sound coming from? Where ‘s all this energy being generated?”

John Peel taught me openness. Talking about punk these days seems limited to talking about 4 to the floor guitars. And there’s nothing wrong with that of course. Love it. But thinking back to the days of punk, thanks to Peelie I’m reminded of the weird funk of The Pop Group, the uplifting ska of The Specials, the dark electro of Cabaret Voltaire and the fucked up poetry of John Cooper Clarke. The musical diversity and freedom of punk and what came after, combined with the search for the new and the fresh, influenced me big time. John Peel combined the old with the new. He also introduced me to the music of the fifties as well as to new hip hop and house. He extended my world of music with sounds from all over – from England to Germany, from America to Africa.

But John was more than a musical guide. He did what great radio does: he made it feel personal. His voice coming out of the speaker felt as though his message was meant for my ears only. John was your friend, although you didn’t know him personally. He told stories about his wife and kids, his daily life was an integral part of his radio show. The John Peel Show was a daily meet-up with a friend.

And as a band we had a dream: to hear our songs being played on our friend’s show. If that happened, our lives would be perfect! And it did happen. He liked our sound. In fact, he liked it so much we were invited to record a John Peel Session. So there we were in the BBC Maida Vale Studios – a band without much studio experience. And recording songs with a veteran producer. He tried to give us a big sound with lots of reverb and noise gates. Just what we didn’t want. “If you want it to sound crap, you can get it crap”, he said. “Yes, please!”, we said.

But the session went down well. Later on we were voted one of the best sessions of the year and were played alongside the John Peel Festive Fifties. We would gather around a transistor radio in a Dutch dressing room, waiting for a gig to start, and were thrilled to hear our tunes. Life couldn’t get any better, we thought.

But life did get better. We ended up doing 5 John Peel Sessions. Not only was that an honour, it was also quite lucrative. Thanks to the Musicians Union, we were getting paid, and paid very well, judged by our standards. Every time we were broadcast extra money came in for every musician that had taken part. So we got local friends to do backing vocals to get paid extra and to be able to tour the UK – to tour with The Fall (25 pounds for a support act, not bad! ;-), to play with The Nightingales, The Three Johns and The Membranes. And to travel everywhere from Birmingham to Leeds to Norwich, the home base of our friends at Grunt Grunt A Go Go that released our album It’s My Dog, Maestro!

John Peel meant a lot to me, both musically and personally. In fact, we became friends. I saw his children grow up and his grandchildren being born. Peel Acres with Sheila ‘The Pig’ and whichever of the children is around is a place very dear to me. So when it came, John’s death was a shock on a lot of levels. I still miss him intensely as a friend and musical companion.

Eton Crop hadn’t played together in decades. But when Steve Harland, the organiser of the Peel Regenerated festival, asked us if we were still playing, I had to say no. But I added: “But for John we’ll get back together. The man changed our lives.” And now we’re rehearsing like mad. Getting ready for the event to commemorate the fact that Peelie died ten years ago. It’s a brilliant line-up with everyone from The Blue Orchids to The Nightingales to A Witness to Terry & Gerry. We’re really looking forward to it. Hope to see you there!

But now that we’re almost ready and we’re coming to England, we thought: why not play a few more gigs? Why not play on October 24 and 25? And that’s where you come in. We’re looking for extra gigs up north! We’d love you to contact us if you have a venue or know of venues that would be willing to put up with us!