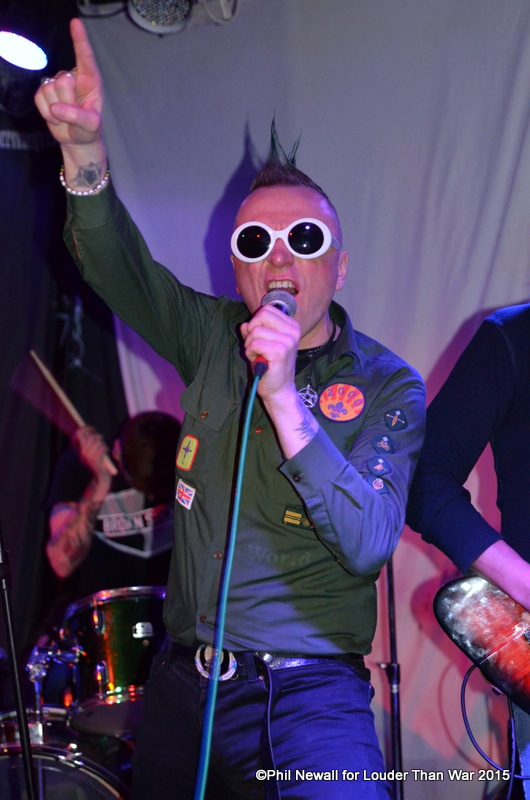 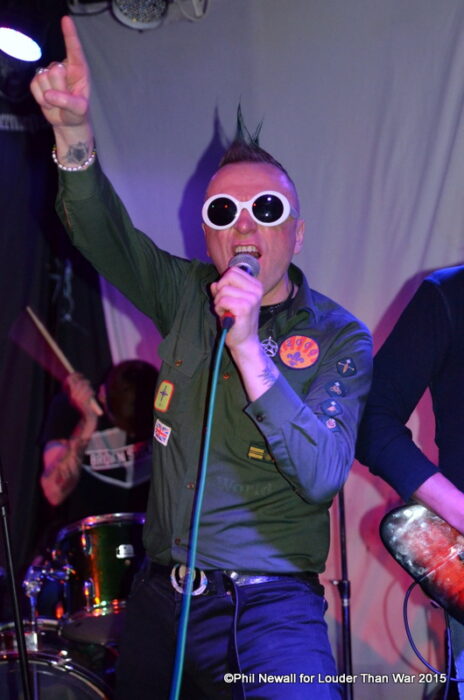 On Trial UK explode onto The Maze stage; frontman Jonny Wah Wah a riot of undeniable energy, with a look of the begotten love child of Capt. Sensible and Olga Toy Doll, Wah Wah twists and cavorts his way through the band’s most recent release ‘The Reward Network’ (LTW Review)…the ridiculous sunglasses, the Boy Scout shirt, vocals delivered through a loudhailer, and that’s all before you consider the songs; every one a high octane blend of power pop infused punk, the innuendo laden ‘Put This In Your Mouth’ driven by a bass that punches right between the eyes, as Wah Wah yelps his way through the chaos; despite the antics On Trial UK are musically tight, and the energetic crowd respond in kind – a collection of bodies colliding, fists raised in to the air, tracks like ‘Anxiety Dreams’ stoking their fire.

Wah Wah demands your attention, he strips down to an On Trial Uk T-Shirt, well when your product is this good it would be a shame not to really push it; reaching back to 2010’s ‘Crack In A Box’ album we get a thunderous delivery of ‘Bring Me The Head Of The Queen’ complete with a mangled ‘God Save The Queen’ guitar riff, Wah Wah is on his knees hollering out the vocals, entirely captivating, his delivery though being reliant on the ferocious guitar of Fuzz and the rampant drumming courtesy of the stripped to the waist Bruce, the band providing the perfect platform for Wah Wah to rip it up, and the majestic ‘I Wanna Say I Love You’ does just that; I reviewed ‘The Reward Network’ for Louder Than War and singled out this track, so infectious its riff I suggested it was half inched from the library of a certain Mr Pete Shelly, live its even better; stripped of studio effects the face shredding riff ignites the sweat sodden crowd, Wah Wah is over the monitors, his face contorted, pushing himself harder and harder, On Trial UK are throwing a party and every last one in the audience has got a VIP entrance ticket, they are not going to stop until they have the entire venue jumping to their juvenile mayhem 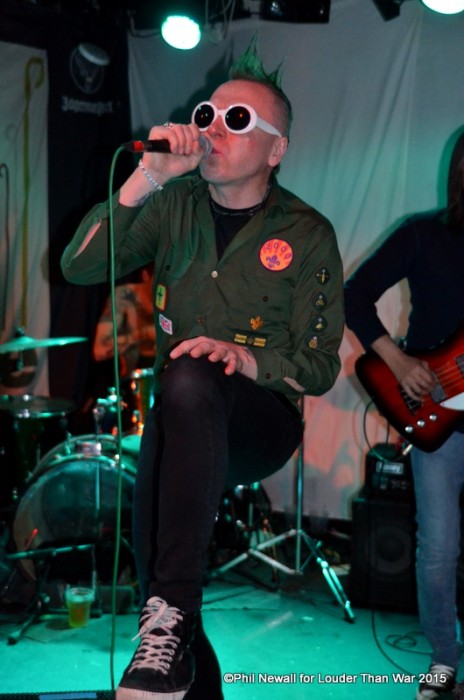 On Trial UK are firmly, and I suspect proudly entrenched within the UK punk ethic, however they have managed to bring something different to the party, and for that they deserve your attention – give them some love, they will pay it back in spades…you will not see this band and not be blown away, their enthusiasm, their energy, the stage presence, in fact strike that out – stage ownership, attitude, and ear-to-ear fun ensured this was an incredible set.