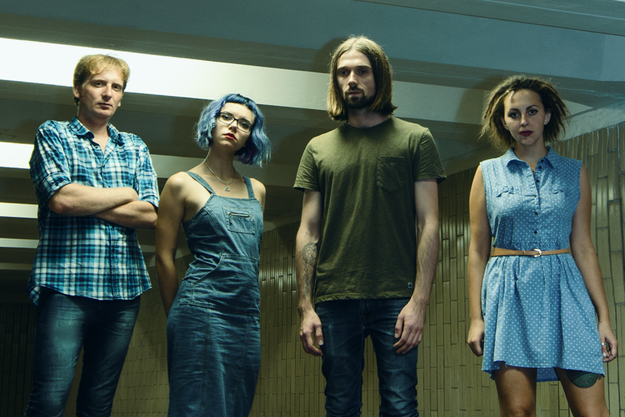 On the video for ‘Sultry Song’, On the Wane guitarist Eli Laika says, “The idea was to create a non-complicated video showing the atmosphere of our workplace, where we write our songs, and also introduce us as artists. After Dari and Eugene’s trip to Lisbon last year, they came back with huge inspiration from Portugal and this inspiration spawned the ideas for creating this song, which we called ‘Sultry”. This video is directed by the band’s close friend Mykhailo Efimenko, who also did postproduction.

“This album is a synergy of four personalities reflecting the world outlook both on music and on life. The tone in which it is recorded is anxious although quite realistic. It’s about the questions affecting each of our existence, the questions to which everyone turns a blind eye on, and the questions that are usually left out of the picture. This album is not an answer – it is the result of our thoughts and forces to date,” says drummer Anna Lyashok.

In early 2017, the band recorded the 10 tracks that would become the full-length album ‘Schism’ under the direction of sound engineer Dima AfanasyevGladkykh (a.k.a. Sinoptik).

The band formed in early 2014, influenced by 1980s alternative rock icons such as Sonic Youth, The Cure, Joy Division, The Pixies and Bauhaus, as well as shoegaze giants My Bloody Valentine, Slowdive, Cocteau Twins, and Ringo Deathstarr. They rented a garage, went into debt by buying guitar amplifiers, drums and a line, and settled comfortably in the garage until autumn.

In October of that year, they had enough material for their first album ‘DRY’, which was naive, honest and raw. Recorded during a continuous 27-hour session by wellknown Kiev drummer Artur Mikhailenko in his garage studio, it was then mixed and mastered by Sevastopol-based producer Alexander Chabanenko.

Released in December 2014, that album was immediately well received by Ukrainian media with moderate attention abroad in Britain, Ireland, Canada, South America, and the USAThis led to Brazil’s The Blog That Celebrates Itself Records featuring the band in an interview and releasing thier track ‘Sweet Girl’ on the ‘Autumn Noises’ compilation.

Following a series of shows in Kyiv and other cities in Ukraine, they recorded their second release, now with hard-core vibes inspired by Mudhoney, Fugazi and similar bands. They unleashed their anxious 6-track ‘Sick’ EP on the world, delivering an angst-filled unbalanced sound that led Britain’s The Sound of Confusion to claim that “this band blows any out of the water for 2015 releases in terms of mixing power-driven genres like grunge, shoegaze and alternative rock”, citing Sonic Youth-esque vocals and the energetic ferver of Gang of Four and The Damned.

After Eli Demyanenko joined the band, they added synthesizers, a drum machine and drum pad and toured more, allowing them to hone their current sound. With a partially electronic and cold sound, the atmosphere became darker, their trademark wall of guitar sound became more meaningful, and distinct vocals became more selfconfident. “We are constantly in transition, indirectly undergoing a metamorphosis. When we play live, we see that people are really interested in this music,” says Eli Demyanenko.

“We suspect that we may end up categorically changing our sound yet again, so we wanted to record the music we are working with now and this moment in time to sonic memory, so to speak,” explains Daria Maksimova.