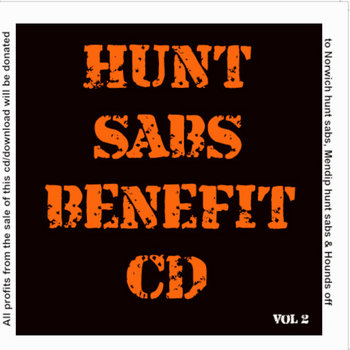 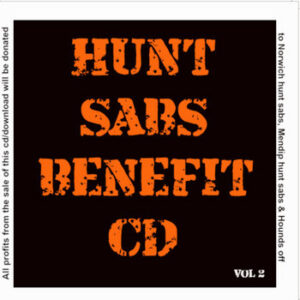 (On the Run Wreck Chords)

26 tracks spanning the punk milieu gathered together to raise funds. Yet more punk…? For fox sake!  Nathan Brown shines a light on it for Louder Than War.

This is the second volume of benefit albums from On The Run Wreck Chords. The first volume sold out quickly of physical copies (download still available) and raised funds for hunt saboteurs based in North Dorset and Weymouth. Many of the bands had links to the area. The funds raised from this second instalment will go to hunt sabs in Mendip and Norwich, and the grass roots Hounds Off organisation.

This time round, the 26 bands featured are from far and wide, some well known, some obscure. It includes anarcho ‘big hitters’ such as The Mob and Zounds, railway punks Eastfield and Blyth Power, and festival favourites Inner Terrestrials, Culture Shock, Pronghorn and the Sporadics. Even the lesser known contributions have their merits, but the stand-out songs for me would be the offerings from Canadian anarchos Dogma or ‘one to watch’ hardcore punks, Zero Again. There are too many to mention. There are very few ‘exclusive’ tracks, most being from previous or current releases, but given the price tag, what do you expect? And if that were your sole motivation, then you’d be somewhat missing the point. 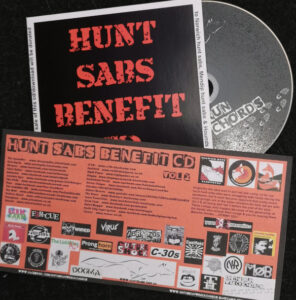 Why do these sab groups need funds anyway? Isn’t hunting banned? Well, no! The Hunting Act had loopholes left in it to be exploited. Policing of the Act is sparse to say the least. The hunting set have never been ones for allowing such inconveniences as laws or other people’s rights to get in the way of their fun harrassing wildlife. Yet if you’re a rambler wanting to cross their private estate, or you disrupt hunting, there will be hell to pay. One law for them, and another one for us!

Many hunt sab groups have also been active against the badger cull. The cull is due to stop at some point, but meanwhile thousands of badgers are being persecuted. While there is a nationwide presence through the Hunt Saboteurs Association, local hunt sab groups are autonomous, effectively operating as a federation. They each have to raise the money to keep vehicles on the road, weekly fuel costs usually met by the individual activists.

Independent anti-hunting group Hounds Off take a different approach. They advise and support rural people on how to keep hunts off their land. They also advise on how to report breaches of the Hunting Act and other wildlife legislation – different tactics but the same outcome: saving wildlife from being pursued and ripped apart

The benefit compilation (along with the benefit gig) as a concept has become something of a punk rock staple. As one animal rights veteran sardonically commented on its release: “Punk? Interesting departure.”  DIY punk is not swimming with money like huge pop acts, yet the inherent values of the musicians are in tune with causes such as this. Many are happy to support the cause or are/were participants in direct action themselves. And for individuals motivated to raise money who come from a punk rock background, it’s what they know.

Maybe the question should not be, “Why is every benefit a punk rock entity?” but, “Why is it no-one else seems to care?”

The CD – in a slip card case with an info sheet – or download can be bought from On The Run Wreck Chords via bandcamp and you can also find the label on Facebook.