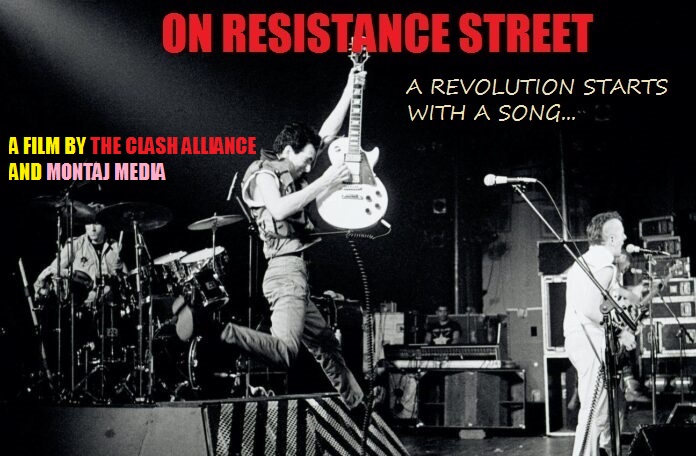 Co-founder of Clash Against The Right, Richard Chorley gives LTW the lowdown….

”On Resistance Street” is a new 90 minute feature length documentary examining the creative and socio-political legacy of The Clash and it’s relevance within the current western political climate. Kicking off with a look at the enormous impact of the 1978 ‘Rock Against Racism’ Carnival at Victoria Park in East London, the film then delves into the contemporary energies of Right Wing appropriation and exploitation of Leftist musical figureheads, using Prime Minister Boris Johnson’s supposed affections for The Clash as voiced in a Tory Party political broadcast, as the launch point.

‘I interviewed Boris once for my Joe book ”Redemption Song”. He tried to tell me that The Clash represented the same things as Thatcherite Libertarianism. I didn’t use his interview.

CHRIS SALEWICZ Author, Broadcaster and Biographer of Joe Strummer. From ”On Resistance Street” 2021.

So just how do people marry up their supposed passions for artists like The Clash, The Specials/Two-Tone, the Dead Kennedy’s and many others with their declared support for the British Conservative Party and the Republican Trump-driven Right Wing energies in America? It’s an enormous cultural question of our times and one that arises endlessly in debates and arguments inside a vast myriad of online social media groups, dedicated to Leftist musical figureheads. Just how did we reach a point wherein a Far Right populist agitator like Nigel Farage places an advert for his Stock Market ‘Tips’ company at the front of John Lennon’s humanitarian anthem ”Imagine”, on prime time New Year’s Eve ‘Youtube’ advertising schedules?  Farage’s cynical manipulation of Lennon’s song, was no doubt designed to tap into the New Year’s Eve song choices of large amounts of people, who see no problem in absorbing rock music which opposes their political viewpoints, but just what does that truly represent as a mass collective syndrome?

The film attempts to answer that question and in doing so also charts the development of the ‘CLASH AGAINST THE RIGHT’ social media group, formed by Clash confidante and Iraq ‘Human Wall’ activist Robin Banks and others, as it evolves into a real life Anti Fascism and Anti-Racism campaign organisation, based in the original spirit and messages of the Clash cultural legacy. It will feature filming of a major ‘Live Music’ Launch of that organisation taking place under the Westway, in the very heart of ‘Clash Land’ this coming October. The event will feature over 20 bands and Artists along with Guest Speakers and tickets are selling fast for what promises to be an important and memorable event. 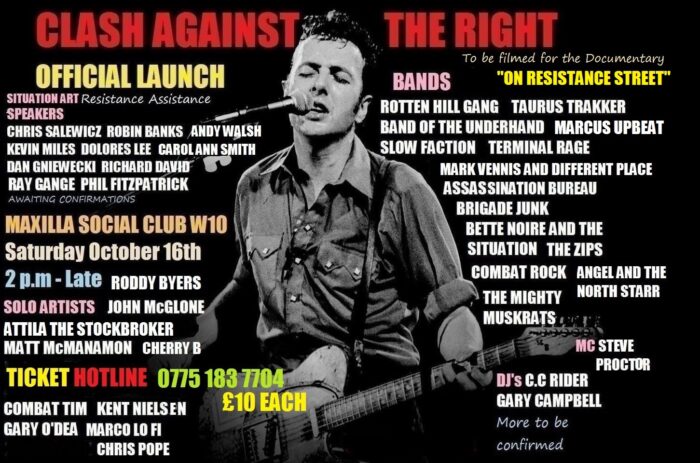 CATR was originally formed as an energy of resistance against Right Wing appropriation of The Clash and other Artists and people can join the Organisation’s Facebook group here. Membership of CATR in organisational terms, will be available following the October Launch.

I believe Joe would have been mighty thrilled to see his and the band’s true fans – those who intrinsically understand what The Clash were about – coming together and making their presence so strongly felt in the contemporary political climate. I am sure he would also have loved to see some of the younger members of CATR involved as well, their efforts confirming the power of The Clash messages inside generations not even born at the time of the band’s original existence.’

In addition to contributions from some of the aforementioned young people, other filmed interviewees include Roger Huddle, original Co-Founder of RAR, Ray Gange, star of The Clash movie ”Rude Boy”, lead members of ‘The Men They Couldn’t Hang’, Roddy Byers formerly of The Specials, various political and academic voices and many others. Other aspects featured include various vintage footage and dramatized scenes covering key moments in the overall storyline.

”On Resistance Street” will feature an original soundtrack of contemporary protest songs, written and performed by key musical members of ‘CLASH AGAINST THE RIGHT’. The album will be released in the New Year following the film’s premiere at European Film Festivals.

Produced by THE CLASH ALLIANCE in conjunction with MONTAJ MEDIA of Southampton, the film’s Co-Producers include Mark Vennis, whose previous work includes documentaries on The Slits, Don Letts, The Small Faces and others. The film will be marketed via the Backbeat musical documentaries website, ran by Mark.

Chris Salewicz recently appeared on the latest episode of the CLASH AGAINST THE RIGHT RADIO SHOW with Richard, Robin and Henry Scott Irvine.  You can listen to the full show here.

Richard’s previous LTW pieces are still on LTW: Stealing the Clash, The New Online Fascism and Radical Rock and  Defending The Clash