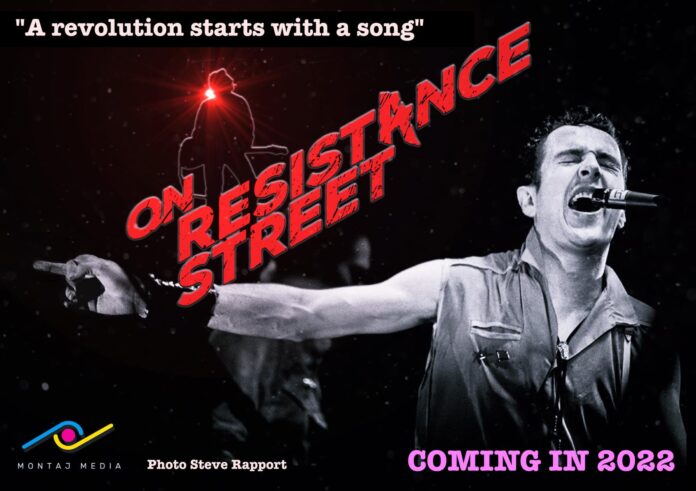 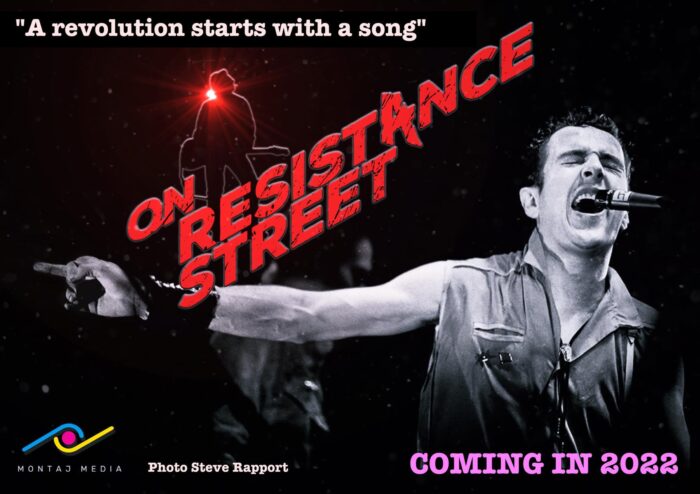 The 90 minute full length feature documentary ”On Resistance Street” shifts its focus to Belfast this weekend, with a 3 day shooting schedule taking place on the 17th-20th December.

The film is a powerful, evocative story of our times and the contemporary culture wars. Using Boris Johnson’s shameless manipulation of The Clash (In a Conservative Party political broadcast) as a launchpad, the film shines a light upon on-following sinister related events involving multimillionaire Tory donors, lurking surreptitiously in social media Clash fans groups, containing over 10,000 people .

”I think we’ve only seen the tip of the iceberg. I think we are on the verge of something both truly exciting and at the same time, terrifying. I think its going to change the way we view society completely, whether it be for better or worse.”

ORS takes an in-depth look at the social media musical universe and the way in which radical music and culture has been infiltrated and appropriated by Right Wing political forces. The obscene implosions involving Donald Trump supporters, former BNP and NF Organisers, Farage fanboys and Tory voters inside big social groups opened in the name of Joe Strummer are examined and analysed, within the parameters of the overall drift to the Right in the west. In direct response to such events, ORS also charts the international evolution of a Clash fans social media group into a real life Anti-Fascist, Anti-Racist, pro-creative campaigning organisation. ”Resistance Street” the organisation, was launched in London in October 2020 at an event featuring over 20 live bands and solo artists and speakers, including the leader of the Fire Brigade Union and other organisations.

Opening with a look at the ‘RAR’ Anti-Nazi Carnival in 1978, the film examines the history of musical sub-cultures within the Anti-Fascist, Anti-Racist struggle in Britain, utilising research undertaken by Rick Blackman, author of ‘Babylons Burning’, (Bookmarks publishing August 2021) a definitive and ground-breaking history of the movement. Inside such reflections it looks at previous appropriations of youth sub-culture, for example the hi-jacking of the original Skinhead fashion and its embracing of black music and style, by its ‘Bonehead’ Right Wing 1980 counterpart.

Moving into the present day, ORS examines the need for defence of radical music and culture inside the contemporary political climate. What does Police censorship of contemporary black ‘Drill’ and ‘Grime’ artists ultimately represent? If the Establishment does not fear radical music and culture in this era, why is it going to previously unprecedented lengths to censor and repress it? Does the inter-racial unity and empowerment energised via such music represent a threat to the political elites? Are these responsible Governmental actions, or frightening state-generated political energies in the face of legitimised waves of racism in 21st century Britain?

The film features contemporary and vintage footage with animation and innovative dramatized scenes, being utilised to emphasise key moments in the storyline. It will include a wide raft of notable interviewees, including radical musical and cultural voices from the past and today. Musicians, film-makers, authors, academics and activists address the question ”How important is radical music and culture inside this political climate and how can its impact be defended and maximised, in reflection of past historical sub-cultural traditions?”

”Is what was true, now no longer so?” Joe Strummer ”Johnny Appleseed”

In Belfast, interviewees include ‘Good Vibrations’ founder Terry Hooley, members of seminal Irish bands, Journalists, Artists and historians. A contemporary exhibition at the Royal Ulster Museum will come under focus, along with a gathering of Belfast based Clash fans at Richard Barclay’s ‘Clash Bar’. Visits to the Falls Rd area and Milltown Cemetery are also scheduled, as the film explores Belfast’s radical history, the influence of the original Punk movement in terms of cultural unity and the desperate need for such energies in the contemporary climate.

‘Co-Producer Rob Clother said ”The original Punk movement in Belfast was a powerful unique energy that helped break down social barriers in a community that suffered dreadfully in the troubles. We are looking forward to examining that and framing it within the context of today’s climate and the need for radical cultural resistance to the tensions apparent in the post-Brexit atmosphere.”

ORS will be shooting in America next Spring. The film will be premiered and released, with a number of international screenings from Autumn 2022.