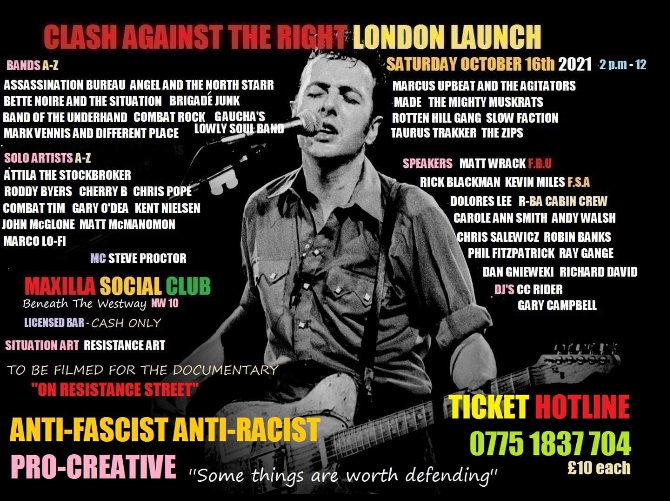 Co-founder of Clash Against The Right, Richard, gives Louder Than War an exclusive look at the documentary currently being made…

The first trailer for the new Clash documentary ”On Resistance Street” has been released this week, after it went into the production six weeks ago. The film’s producers ‘The Clash Alliance’ and Montaj Media are working on a nine month production schedule with shooting taking place in London, Belfast, America and other parts of the UK. The film is a 90 minute feature length doc and will be released in Summer 2022.

It takes an in-depth look at the subject of Right Wing appropriation of radical rock music, using Tory Prime Minster Boris Johnson’s exploitation of The Clash in a party political broadcast in November 2019, as it’s springboard.

The historical role of radical rock inside Anti-Fascist and Anti-Racist arenas is examined as is the contemporary online musical universe, in which the Right Wing dominated political energies of the era, manifest constantly inside social media groups dedicated to Leftist bands and artists. The cynical infiltration of a multi-millionaire Tory Party donor and friend of Johnson’s, into a Facebook group containing thousands of Clash fans, lays the ground for these aspects and embodies a socio-political trend which ensures many of such groups constantly erupt into ideological conflict. This with particular reference to groups dedicated to ‘Punk’ as an umbrella genre, in which the phenomenon of voices claiming allegiance to the original movement’s sense of energy and rebellion, now see fit to marry such affections with their middle aged support for reactionary political perspectives.

Co-Producer Mark Vennis said – ” It’s a fact that the atmosphere in a lot of online musical environments is actually definitively ‘anti-social’. And it’s crystal clear that many who supposedly hold affections for what they call ‘Punk’, actually dismiss the Clash’s messages of social justice and equality with contempt. Our film is in many ways a defence of those original values contained in the Strummer-Jones songbook and shows how – in a kind of folk song tradition – they are probably now even more important in today’s political climate.”

The film also chronicles the development of the ‘Clash Against the Right’ Facebook group, which after just over a year’s existence, will evolve into a real life Anti-Fascist-Anti-Racist campaign group, next month. The CATR Launch at Maxilla Social Club, in the heart of West London ‘Clashland’ takes place on Saturday October 16th and will feature live musical performances from over 20 Bands and solo Artists. There will also be a number of Speakers at that event, including leader of the Fire Brigade Union Matt Wrack, the authors Chris Salewicz and Rick Blackman, Football Supporters Association Chief Kevin Miles and others.

CATR was formed by original Clash fans and friends of the band, in response to Boris Johnson’s attempts to manipulate The Clash and the accompanying trends in which the band’s stances and ideals have been hi-jacked. A small amount of tickets are still available for the Launch, with only a very limited amount of admissions being likely ”On the door”.

‘We were not prepared to let history be re-written via Right Wing propaganda and appropriation. The messages and ideals of The Clash are a cultural legacy which has to be defended in this climate. We live in times when the spectres of Racism and Fascism are defining social currents and at such moments, radical culture always comes under attack. So you either stand up on behalf of that culture or you don’t. We did not see it as a choice.”

The ”On Resistance Street” trailer contains contributions from ‘Rude Boy’ star Ray Gange, Paul Simmonds of legendary British Folk-Punk veterans ‘The Men They Coudn’t Hang’, Chris Salewicz biographer of Joe Strummer and Robin Banks. Over the coming months, a long list of interviewees including Musicians, Activists, Writers, Film makers and broadcasters will contribute to the film, which will also feature a soundtrack of 20 original contemporary protest songs from musical members of the ‘Clash Against the Right’ group. 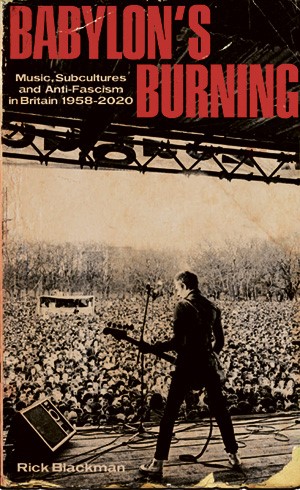 The ‘Clash Against the Right’ radio show series, presented by Henry Scott, has now formed partnership platforms with West London’s Portobello Radio and Radio Scarborough in the north of England. The next show will be recorded ‘live to air’ on October 6th at the Portobello studio, with a Mixcloud upload being made available shortly later.

The show will be a ”Pre-Launch Special” featuring special guests ‘Babylon’s Burning’ author Rick Blackman and legendary Rock writer Kris Needs. Both writers will also be recording interviews for ”On Resistance Street” on the same day.

The film will also utilise dramatic scenes to emphasise key moments in its narrative and people will be able to follow its production closely via a special ‘Film Page’ on Mark Vennis’s ‘Backbeats Docs’ website. That page will appear in the next few weeks.

And here is the trailer… and it looks superb.

The latest CATR Radio Show, featuring Ray Gange is available via this link.