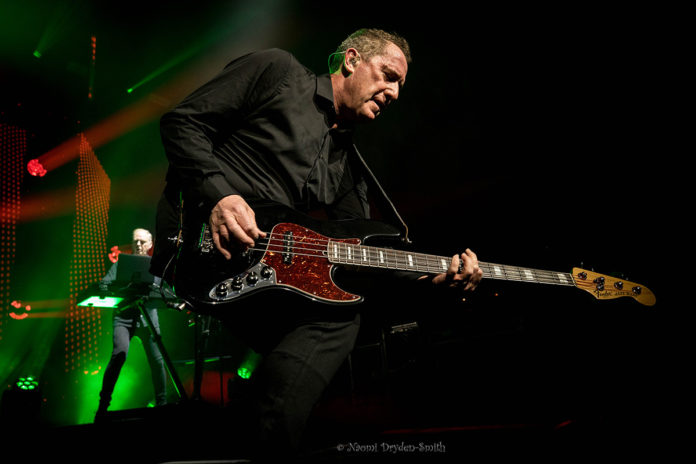 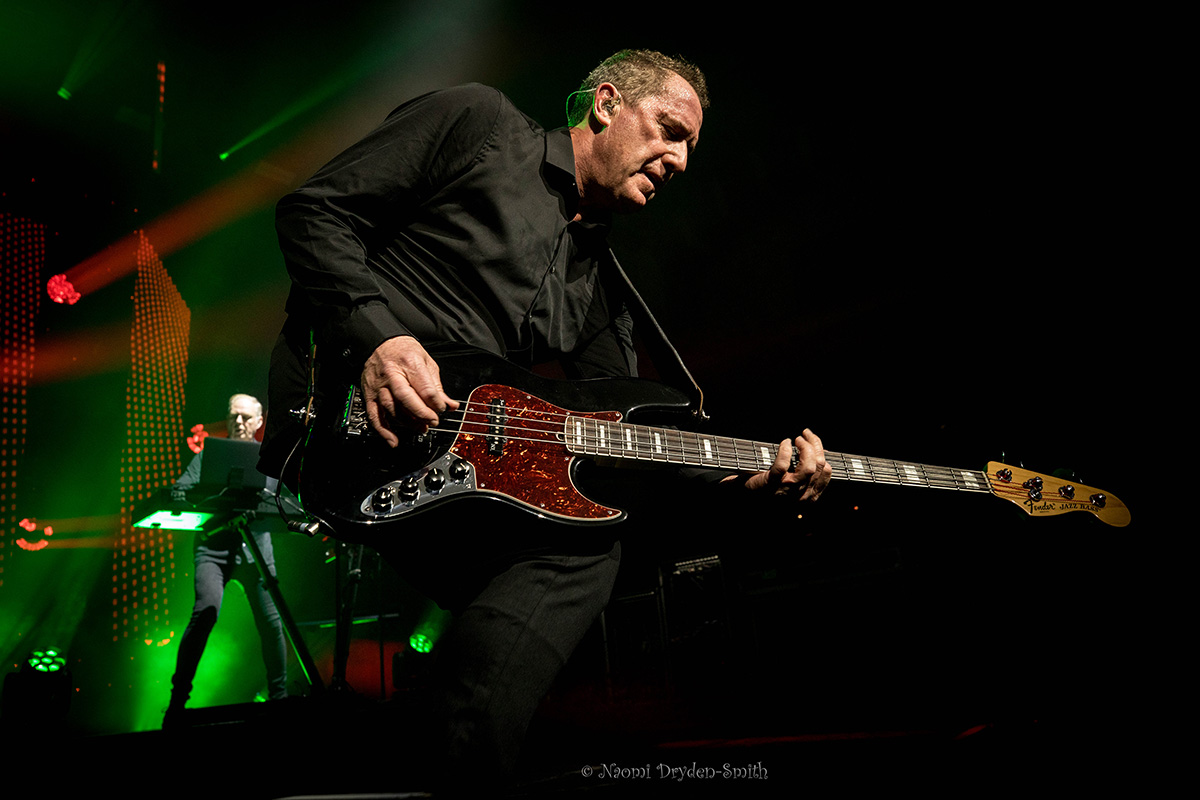 The opulent Art Deco stylings of the Pavilion Theatre, Bournemouth play host to 80s futurist synth pop as OMD pay a visit after 32 years. LTW’s Ian Canty goes back to the future.

The best synthpop of the late 70s and early 80s managed to pull off the enviable trick of still sounding like a future yet to come around forty years on. Messages, Orchestral Manoeuvres in the Dark’s third single, manages this feat with ease. The Peter Saville sleeve, with the design of a pen fenced off under wire underlining the song’s lyrical concerns of communication and alienation in the modern world, is a prime example. The music was absolutely perfect pop music for a new age and OMD always felt like the more human side of electronica, with an emotional heart beating under the robot rhythms. Late twenties fun palace the Pavilion Theatre Bournemouth provided a suitably ornate venue for the latest stop on their 40th Anniversary Greatest Hits Tour and as I sat down in their “slightly too low” seats, I pondered the lot of the futurist’s past.

Anyway MiG15 opened the show and any thoughts that nepotism may have played a part (the bass player is Andy McCluskey’s lad James) are swiftly put to bed, they’re good fun. Singer Adam Bray enters the proceedings dressed like a cool nerd out of a Brat Pack movie, all slicked back hair, Ray Bans, snazzy jacket and sparkly trews. Thankfully he backs it up in the vocal department and MiG15 give us an entertaining half hour of guitar driven post punk meeting electronic beats head on. The anthemic Interstellar and the single Bite The Bullet were probably the pick of their set for me, they got the crowd warmed up pretty well.

The 40th Anniversary Greatest Hits Tour of Orchestral Manoeuvres in the Dark was always going to do what is said on the tin, but the main worry I had about seeing OMD for the first time I suppose is that what sounded so great on the turntable may not transfer as a live spectacle. There was no need to fret – the band worked hard and kept things moving, with Andy McCluskey being the very energetic focal point. Barely stopping for breath during the entire set, he came complete with a full set of Dad-dancing moves…No, I’m being unfair, he got the whole place up off their seats, provided great presence to the performance and was in good voice too. 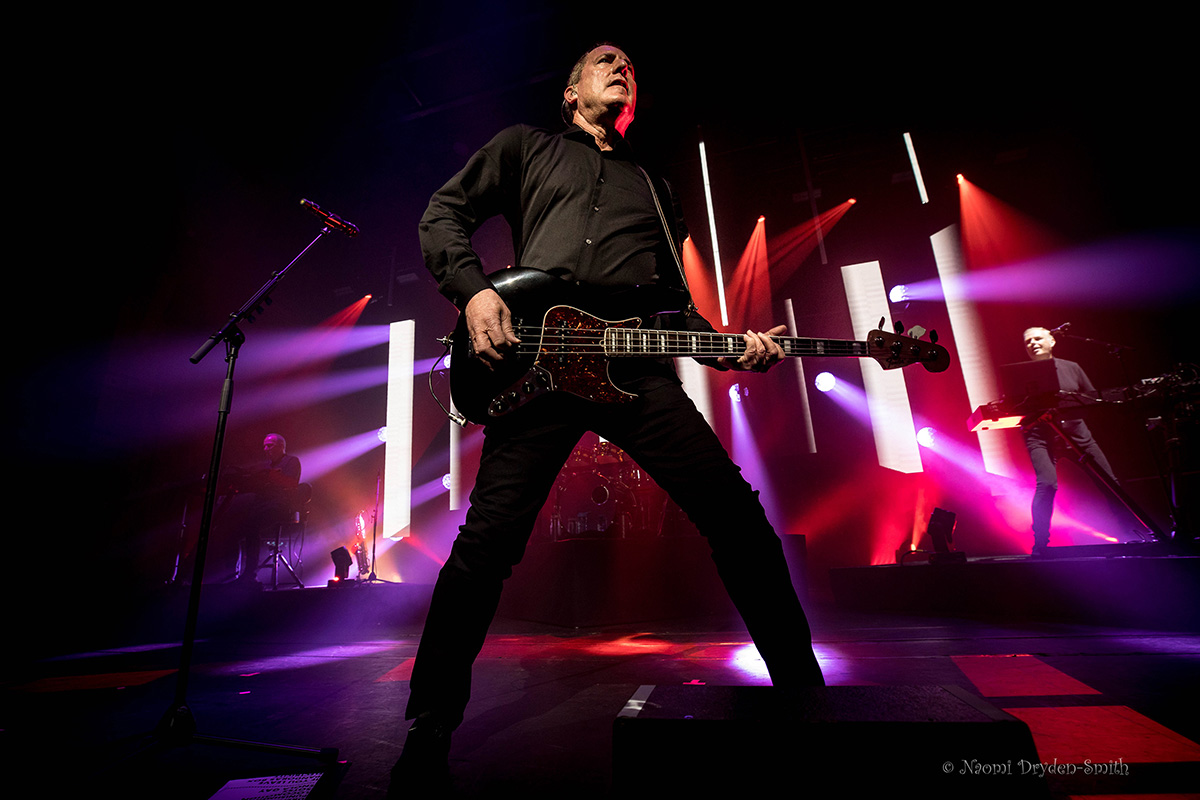 The set commenced with an intro that went into Stanlow from the Organisation album and soon they were into Messages early in the set. It’s just a great single, one of 1980’s best and they do it justice and follow it up with a breezy Tesla Girls. Have no doubt this a real show with dazzling “ouch my eyes hurt” light displays, but the bombastic accoutrements are smartly undercut by McCluskey’s constant movement and self-effacing wit, mocking his own bass playing abilities in relation to the chip off the old block’s efforts in the evening’s opening act.

Joshing affably with his long term foil Paul Humphreys, the pair do a fine job between them on the trio of singles from 1981’s Architecture And Morality album at the midway point of the set, with Souvenir being particularly choice. They line up alongside longstanding OMD member Martin Cooper on keyboards and drummer Stuart Kershaw for a portion of the set without acoustic percussion – a brilliant version of the Electricity single’s flipside Almost is a real highlight.

If I was being exceptionally picky I would say that OMD’s later hits like Sailing On Seven Seas don’t quite stand up to the earlier material or their more recent stuff (neat versions of new single Don’t Go and History Of Modern were proof to me at least). But that is being needlessly harsh as those songs did clearly please a lot of folk in attendance, who happily danced while ignoring this writer’s forlorn hope that they would play 4-Neu.

Before you knew it they bashed into Enola Gay and that was it for the main set, though of course they were soon back for an encore. The night closes with a swift knockout punch of that debut single on Factory, Electricity, which raised the roof and provided a hectic and fitting end. Orchestral Manoeuvres in the Dark are still the sound of the future, as mad as that sounds in 2019, and live they’re still a whole shedload of fun too. 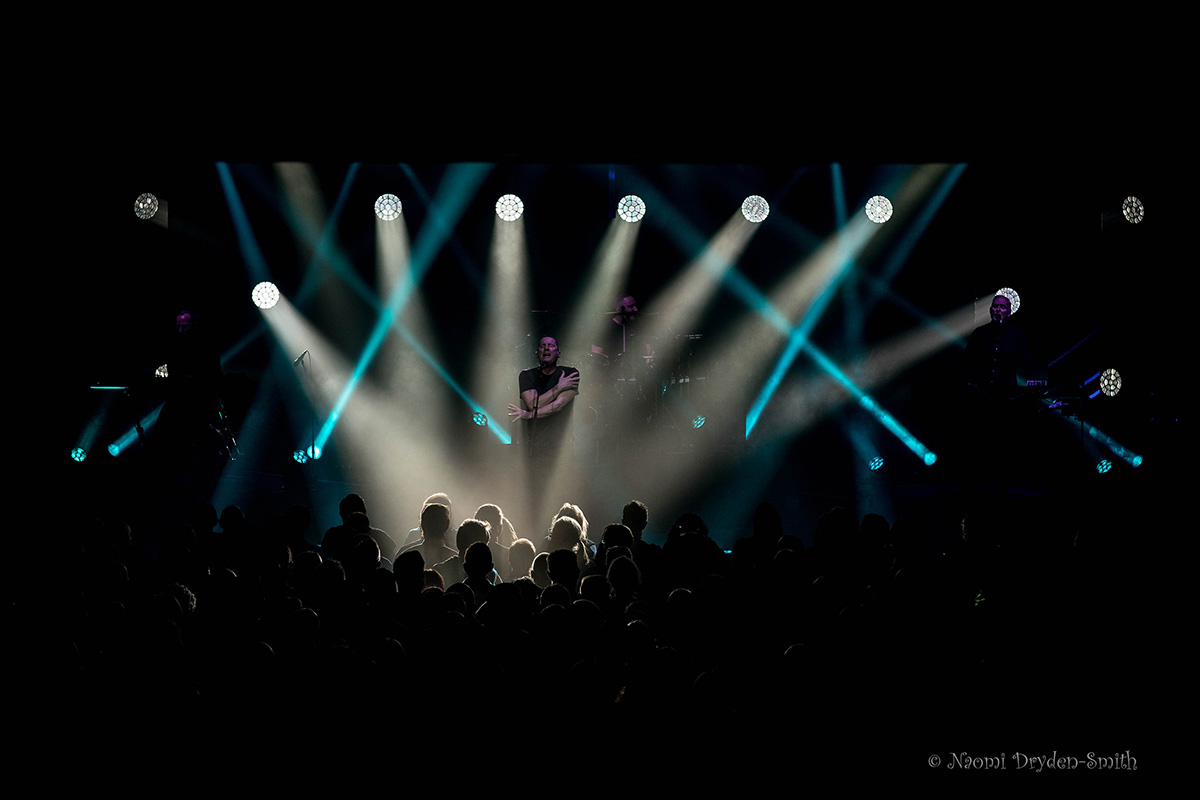