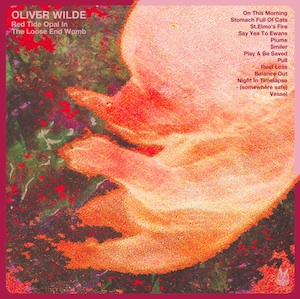 The ever brilliant “downer pop songsmith” Oliver Wilde is back with his second album. We fell in love with his first one and gave it an impressive 8.5 / 10. His second album, recently selected as a 6 music “album of the day”, carries more than on the good work. Check out Ben Tansey’s review below.

On his new album, Red Tide Opal In The Loose End Womb, Oliver Wilde eschews all the fashionable hallmarks of the current mainstream in favour of a pallet that’s as much nostalgic and familiar as it is entirely of his own creation.

Across these twelve songs we can hear Grandaddy keyboards, Kevin Shields style fuzz drones, the warm string arrangements of Beck’s Sea Change and the melancholic, languid vocal delivery of Mark Linkous at his most evocative.

Wilde’s is a busy and colourful canvas, full of fussy little details no doubt painstakingly arranged, and other than the occasional electronic blip (see the excellent Rest Less or Plume) this could have been recorded at any time within the last 20 years. The album feels soft and dream-like and when closer Vessel stutters out its last tumbling synth and it’s all over it’s hard not to feel like you’ve just awoken from the most peaceful of sleep.

That’s not to say Red Tide… plods along. Album opener On This Morning begins with a beautifully mournful (no pun) violin fanfare before giving way to a light shuffle propelled along by militaristic triplet snares. It’s followed by the slightly 808 sounding drums and Casio riff of Stomach Full Of Cats. The anthemic Play And Be Saved features the kind of guitar line that Editors might have used on their first album and it’s a track that’s pleasant enough to make it onto daytime radio. Meanwhile, Night Time In The Lapse has the squelchy beats and squawking keyboards of every good Grandaddy song.

It’s when Wilde’s at his most contemplative that he’s at his best. Standout track Plume features a gorgeous and heartbreaking string arrangement, crackling, fractured beats and some fine banjo fingerpicking in amongst waves of guitar delay. Vocally, he’s a little reminiscent of The Invisible’s Dave Okumu here, with a warm but fragile low register.

As a songwriter Wilde has abundant character and individuality; as a singer it sometimes feels like he’s trying to hide behind distortion, overdubs and harmonies, burying his lazy vocal within his luscious arrangements. Occasionally one begs for Wilde to let go of the lethargy and kick it up a gear and put as much life into his voice as he does his intricately constructed textures.

It’s refreshing to hear an album like Red Tide… being made today; this is certainly not a record “made for the dancefloor” and its production – which is uniformly excellent – is less clear and pristine as it is warm and slightly wooly (in the best possible way). It feels like a very personal record, like Wilde is whispering his deepest secrets into your ear. I hope he continues doing so for a long time to come.

All words by Ben Tansey. This is Ben’s first piece for Louder Than War, when he’s done more they’ll appear in his author’s archive.