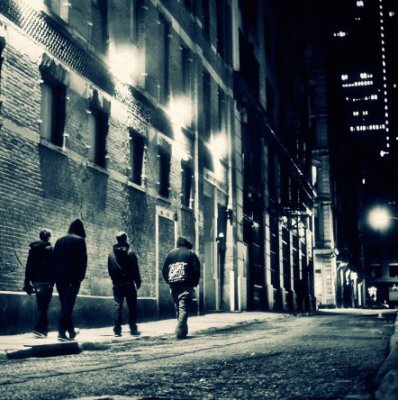 Olde York is / where one of the best “old school” Hardcore bands in the world…fact.

For those of you who haven’t heard of them then you have missed the boat. It has set sail and those lucky enough to get on board did so years ago. This review alas has come too late for many to witness their live show as they have just played their final shows in Europe with the current line up and the future is uncertain for this NYC powerhouse. Don’t let that stop you from investing in this though, their second album.

This album is a classic, full of great tunes and power right from the first song to the last. Punches are defiantly not pulled and Olde York hit you hard where it matters.
It is never easy to transpose a live sound to a record but you soon realise that this album delivers the excitement a near as you can without getting hit by all the sweat.

I am not going to give a detailed analysis of each song as on this album each song is as good as the last and to break it down would be unfair. It’s an album that rocks and thats all you need to know. Shallow World just needs to be heard and as it’s a short album consisting of 11 furious tunes then this should not be a problem for anyone.
Lead Vocalist Ted snarls his way though the songs spitting out venom like a angry Cobra, while Guitarist Blake riffs out the 6 string at a furious speed. Plenty of Sabbath type licks here folks to keep the moshers happy. The Rhythm section of Drummer Devon (Blake’s Brother) and Bass player Mike is a tight unit and as a foundation, it’s a solid as the base to the Statue of Liberty.

For lovers of this type of music it’s up there with the best, for lovers of Traditional metal then there is enough to make you put down your Iron Maiden albums for a while.

Trust me and buy this album available on line through Core Tex Records or download through the usual online music sites. You will not be disappointed and it will get you jumping around like you are back in the day, baseball cap back to front and your shorts long and low.