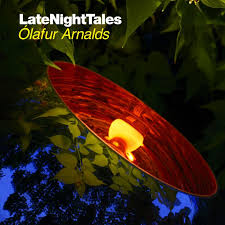 The latest in the Late Night Tales series techno/classical producer Ólafur Arnarlds take the reins in a mix that mixes ambience with beats to thrilling affect. Simon Tucker reviews:

First things first, the title ‘Late Night Tales’ is a slight misnomer as anyone who has been following these releases of late will realise that even though they seem to exist for the purposes of late night listening there is also much joy to be found playing them driving as the sun sets or on a hazy sunny afternoon (remember them?) or even on a relaxing Sunday morning as the mixes are put together so well that all bases are covered. This effect continues with the latest edition to the series mixed by Ólafur Arnalds who has crafted an hours worth of music that flitters between the serene to the uplifting with pinpoint precision and a flair for the dramatic.

With this mix Arnalds has created something that is pure of heart and communal in intent. The album is full of whispers and echoes that penetrate deep into the psyche of the listener and leaves one feeling uplifted and free of stress and drama. This is hymnal music made to create a sense of unity with those that care to take the journey. So what exactly do we get? Well we get the choral beauty of Julianna Barwick’s Forever which hovers in the clouds piercing the grey with vocal shards of light. We get Koreless’ skittering Last Remnants that plays out like a child prodigy creating a symphony in a toy store, DIY buy with maximum ambition. We are treated to the updated sounds of street corner vocal groups that is Anois’ A Noise and the yearning post-dubstep of James Blake who is capable of breaking many a heart with his futuristic take on soul music.

Not all that is here is meant to be listened to whilst lying down mind you and there are plenty of moments that pick up the heart rate whether that be the wonderful Pre by Rival Consoles which, with its slight house textures, is euphoric yet restrained or the Jamie xx remix of Four Tet’s Lion which hollows out the original and leaves a skeletal framework which leaves the snare snap centre stage whilst the spirit of the original glides around in the shadows left behind.

As if that wasn’t enough we are also treated to three Arnalds originals in the form of the drifting beauty of RGB which marries electronics and strings in perfect synchronicity,  Kinesthesia I which whilst brief in running time is epic in emotional punch, and Orgoned which is by his techno side project Kiasmos. The traditional Late Night Tales cover sees Arnalds take on Destiny Child’s Say My Name with vocals by Arnór Dan and the short story this time is narrated by David Tennant whom Ólafur worked with on Broadchurch.

Ólafur Arnalds has with this album created a work that manages to float above you whilst stirring the deepest of emotions. It is in no way aloof or calculated, it is a pure experience and another sign of what great music can do to the listeners state of mind.