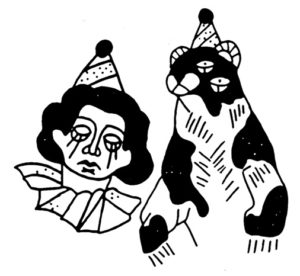 Okay Champ (brilliant name!) are made up of members of EAT FAST, YOURCODENAMEIS:MILO, Nately’s Whore’s Kid Sister and Let’s Buy Happiness. The band got together via extensive pub-chat between vocalist John Edgar and guitarist David Turnbull, with the final catalyst spurring the formation being the death of Leonard Cohen. Once the pair had enlisted colleagues Mark Brown (bass) & James King (drums), and Stuart Walkinshaw (electronics/synths), Okay Champ became a band in earnest.

Described by Edgar as “basically a giant strop about mortality, and Brexit”, The Party’s Over (Goodbye Yellow Brick Road) is the band laying the groundwork for further tracks built on paranoid, jarring sounds accompanied with bleak,  wry lyrics.

The single opens with a laconic guitar riff with an equally laconic vocal delivery complaining what he used to have and what it’s now become. The quiet guitar start slowly morphs into a bass and drum heavy cacophony that eventually erupts into a full on wall of noise and a strained/strangled guitar solo vying for attention over the racket.

Together with IDLES, LICE and LIFE, Okay Champ are one of the best band I have heard recently that mix discord with socio-economic and political commentary. From this one track alone, I can see great fucking things from this band. File under essential.

The Party’s Over (Goodbye Yellow Brick Road) was produced by Okay Champ and Will Thornycroft, and is being released via the band’s own newly established imprint Treetrunk Records on May 10th.