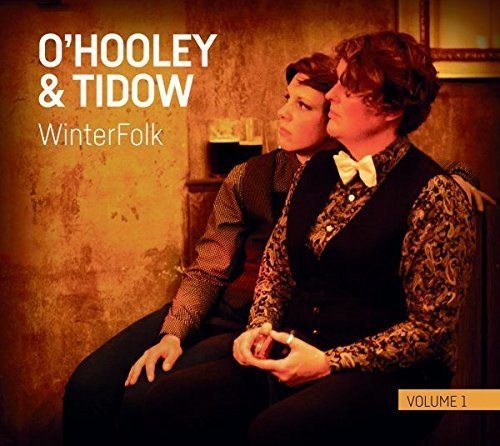 Once again, it’s the time of year when thoughts turn to Christmas and a Yorkshire duo who are slowly working their way to becoming significant players in the folk field and  legends beyond their own lunchtime. Their highly acclaimed catalogue combined with their contribution to feminist  political quintet,  Coven and the Arts Coucil England commission, The Passerine, is now topped off with a slight change from the usual seasonal offering in WinterFolk.

It’s becoming the done thing these days to punctuate ‘proper’ album releases with something a little more diverse in the between album period; an off the cuff bunch of outtakes, a remastered anniversary release or collection of unreleased material is the sort of thing that  keeps some of our high profile rock bands in the public eye and the cash flow…erm, flowing. Something to be going on with, like when you go to the department store to see Santa to pass on your Christmas list; you get a gift, to ‘be going on with’, until he delivers the real stuff on the big day.

The Christmas (or does ‘seasonal’  album sound better?)  is an easy enough target for musicians. By golly, even Dylan has had a go and amongst others no doubt, there’s even one on the way from American pop rockers Cheap Trick this year. Following their flirtation with the ‘Summat’s Brewin’ collection of songs with a drinking theme, the time is right for O’H&T to take up what The Unthanks would call another diversion.

BBC Radio 2 Folk Award winner Ben Walker adds some final touches with string arrangements not dissimilar to some of the sublime work of Nick Drake to a set already finely sprinkled with elegance and finesse. Having  gathered  reimagined Winter themed material from previous O’H&T  albumstogether with various obvious and less so festive gems, it offers a refined  alternative to traditional fayre;  less drunken cavorting and carousing and more sobering contemplation. A quality that  provides a central theme to a musical offering  of peace and goodwill, whilst  peppered with more realistic  issues of domestic violence, global warming, poverty migration and loneliness. Yet glimmers of hope emerge, with the prospect of songs that warm and  provide a welcoming thaw.

The first words of “Winter’s coming” accompany the now distinctive opening Belinda O’Hooley piano notes, recognisable within a few moments of Fire & Wine. It sets a solemn tone for an album that Belinda makes her own. For anyone used to her pounding out rollicking, jovial tunes, settle back to appreciate her stately playing in style that’s meticulous and majestic in delicately working the ivories of the Machynlleth Tabernacle Trust Steinway.

The familiar twinkling notes of The Last Polar Bear are replaced with a much more sombre atmosphere, almost drenched in an unrecognisable despondency, along with a One More Xmas that’s positively heartbreaking. Revisited from the Silent June album for  their Winter Folk Tour of 2016, Jude Abbott adds some brass to make the piece even more poignant and seasonal. A deeply moving piece that, if it’s possible, ups a notch. Three songs in and you get the feeling that the lump that’s risen in the throat is going to be difficult to shift along with  the overwhelming urge to weep openly.

Similarly, Whitethorn is revisited from Rachel Unthank & The Winterset’s The Bairns. A record of the stillborn tragedies of Belinda’s Irish great grandmother never ceases to disturb and induce an icy chill, the new version backed with a snaking drone taking things down a degree or two. Winterfolk Carol, Wexford Lullaby and Coventry Carol all see the combination of the two voices to the fore, the latter once again caressed by some exquisite piano moments that verge on the classical.

A brief respite with some jollity comes with Richard Thompson’s We Sing Hallelujah, the kazoos of the lighthearted live version replaced with Jude Abbott’s brass that always evokes the mood of chestnuts roasting on the open fire . Described as “the holy grail of seasonal song,” Fairytale Of New York takes on a world weary quality yet lifted by some stirring Ben Walker string arrangements, completing a journey through love and loneliness, dreams and disillusions. Volume 1 sets the bar and sets expectations for Volume 2 and the ongoing series (yes, it’s a cross they’re going to have to bear) are high.

Very much living up to the billing of the alternative and introvert’s guide to Christmas. A seasonal album like no other. Nostalgic and moving, a seasonal album for our times, WinterFolk might just be O’H&T  bettering the best they’ve done.

You can get a flavour of O’Hooley & Tidow in Small, Big Love from 2016’s Shadows, animated by Marry Waterson, here: