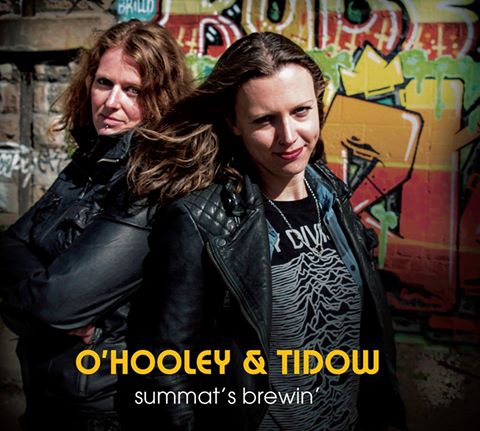 It’s funny where one song can lead. Inspired by their love of real ale – both drinking it and singing about it, comes an album which they really had to make. Belinda O’Hooley and Heidi Tidow scour the drinkers songbook for a set which might contain a surprise or two.
“Does anyone here like real ale? We dern’t.” Not a misspelling but a weak attempt to phonetically replicate the droll Yorkshire tones of Belinda O’Hooley. And a snatch of the between song patter which regularly introduced the song ‘Summat’s Brewin’ from their ‘The Hum’ album at gigs over the past year or so. A song inspired by a love of real ale and an appreciation of the art of the brewer and his (or her) craft and now one which in itself has inspired  ‘Summat’s Brewin’- the album.

A collection of songs gathered together to acknowledge a nation’s fascination with alcohol and  the drinking culture – the good, the bad and the ugly. Put together very much in the same tradition and philosophy as the home brewers and  micro brewery, the album was recorded at home and released on their own Hum label – all home-grown and organic, put together with care and passion. In a word, indeed one of Belinda and Heidi’s favourites  – real.

The pair are often lumped in with the folk crowd, but are they really folk?? Perhaps a lot of what they do is, yet there’s much more breadth  to their work  than that.  Whatever it is, be it sentimental stories of old folks outings or songs inspired  by their love for analogies with birds, polar bears and horses, heartfelt tales of estranged mothers and their children or notorious female Victorian cross dressers, you can be guaranteed a simple and rare quality.

And so it is with ‘Summat’s Brewin’ – the album. Far from being a predictable set of loud and rowdy drinking songs  – the sort that might be heard belted out by hairy arsed rugby crowds after a skinful of beer and a rousing win –‘ expect the unexpected’ would  be a suitable subtitle.  Having said that, the songs are typical O’H&T – from the sharp and well observed to the touching and sensitive. From sources as rich as the traditional to Belinda’s dad, cover versions  and a couple of originals thrown in for good measure, this is a collection which surprises and warms more like a nice short than a well brewed pint.

‘Wild Rover’ is a perfect example. They call it a stereotypical drinking song – perhaps it’s THE archetypal drinking song but they take it at their own pace. Rather than boisterously chanted out in  glorious discord, its interpretation is more like a pleasantly tipsy and sleepy afterthought. The evening before the morning after the night before.

There are a couple of little vignettes of tunes including the  crackly vinyl sound of ‘The Rakes Of Mallow’,  which then lends it’s tune to the chorus of the pick of the O’H&T originals ‘Last Orders’ – a witty and entertaining  commentary  of the  Friday night drinking culture. Delivered in a style vaguely reminiscent of  early deadpan  Elbow/Guy Garvey on ‘Forget Myself’ (“they’re pacing Piccadilly in packs again”) and accompanied by a remarkable synth pop beat – less of the hi tec Korg and Oberheim  and more of a charmingly retro  Bontempi and Casio mini keyboard symphony.

Talking of which, throughout the album are uncomplicated percussion embellishment things going on. It  sounds like the cutlery drawer might have  pressed into service or something maybe grabbed from the kitchen or from under the stairs, both locations also assuming  the mantle of studio for the duration. All adding to the delightfully home made and natural ambience.

The main honours though go to a couple of covers. Richard and Linda Thompson’s ‘Down Where The Drunkards Roll’ and Loudon Wainwright’s ‘White Winos’ are perfect fayre for the O’H&T treatment. Both delivered with a backing of simple piano and forlorn and sad in different ways they’re  arguably better than the originals. The album signs  off with an inevitable version of  ‘Summat’s Brewin’ recorded at a recent gig  and capturing the joy and exuberance of the live show – all singalong and rollicking piano – Belinda’s famous “fine line between Rachmaninov and Les Dawson” line giving a hint of the underlying appealing humour  which is much a part of their appeal  as a duo as their musical leanings.

They’ve  even been touring the album in local micro breweries (some hardship!) not only showing their commitment as  jobbing  and gigging musicians but giving this  slight diversion on the road to the follow up to ‘The Hum’ (is due next year)  its charm. Not an album with the usual studio spit and polish but a labour of love and as Heidi has said, it may be one of the best things they’ve done. Hard to disagree.