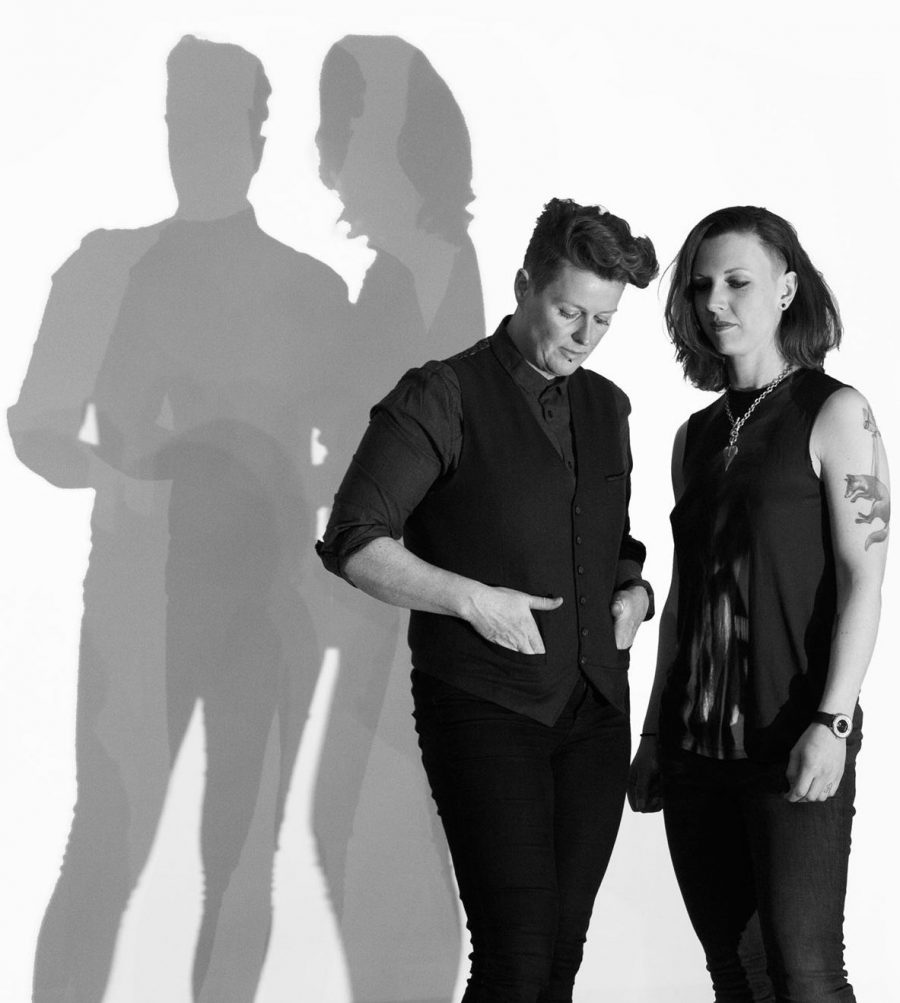 All set for a high profile launch at this year’s Cambridge Folk Festival,  Mike Ainscoe gets early dibs on the new album from Yorkshire duo O’Hooley & Tidow (tee-dough  – a handy reminder from PR Will McCarthy for those who still haven’t got there  yet).

Cambridge  was the  site of a pair of what you might call triumphant gigs at the 2014 festival  with an appreciative and biased audience rooting for O’Hooley & Tidow so quite apt that they’ll return later this month for the release launch. Following 2015’s low key, high impact collection of often light hearted, often melancholy drinking  related  songs  in Summats Brewin’ (LTW review here) ‘Shadows’ finds them of a much more sober disposition and taking the time to add a bit of studio polish to ten O’H&T originals plus a cover of Joni Mitchell’s ‘River’.

‘Shadows’ finds their familiar style  touching on familiar territory, themes and topics with which fans will be well acquainted,  but perhaps not in this depth or with quite the same vision. Their passion you can take as read – so you’ll find lyrics composed around the topics of strong and inspirational women, the vulnerability of  childhood and naturally, there has to be a song with an animal theme.

Listening to them with a band is something to get used to when you’re seeing them play regularly as a duo. Not that it’s in any way evasive, just a subtle touch here and there – a touch of drums from Pete Flood now finding gainful employment post Bellowhead and Jude Abbott’s brass drifting in now and again adding a mournful and melancholic quality to ‘Blankets’  . Michele Stodart, fresh from her own solo ventures, adds some electric guitar and bass and there’s some fiddle and viola from Rowan Rheingans and backing vox from folk friends Hazel Askew, Grace Petrie and Hannah James. Quite a collection on the back up bench but at the core sit Belinda and Heidi, refining  and cultivating their working partnership.

While much could be classed as deep and meaningful, lighter moments come in the form of ‘Beryl’ – a tribute to racing cyclist Beryl Burton which can be added to The Mixtures’ Pushbike Song’ and Kraftwerk’s ‘Tour De France’ in the ‘songs about cycling’ file. Uptempo and lighter, it’s a subject and a title/character which is pure O’H&T; it  simply wouldn’t work with a different name.

While admitting they “don’t know who to vote for next” in ‘Made In England’, which explores  the contradictions of the UKIP policies in a country which in the whole, embraces a multicultural society, it combines their irreverence with a more thoughtful message.  Decidedly English with the brass and set of backing vocals, it signs off with a vibrant “made in England!” cry and candid laughter caught on tape.

And then the animal song –  ‘Blanket’, the subject – orphaned elephants, slowly building into an impassioned plea, but in an album of absorbing songs, the key track could well be  ‘The Needle And The Hand’. It emerges as  one of those songs you could imagine Guy Garvey casting his fairy dust over, crooning his words over a low key Elbow backing and an example of the quality of lyric writing which infuses the album – ripe for analysis – and no, it’s not a blemish on the recording but Ben Stone’s tattoo needle making an appearance. Skipping from one key track to another, the celebration of Great War unsung hero Daisy Daking and the suffer little children ‘Reapers’ offer a constant diet of food for thought. Another unsung star is  the sound of the Machynlleth Tabernacle Trust’s Steinway, providing the inspiration for the title track and giving Belinda a chance to what they call show her chops not only on that but ‘The Dark Rolling Sea’ from the Ballads of Child Migration. Not a showy player, she relies on atmospherics  for the latter while ‘Shadows’ allows her to showcase the rather grand instrument  – a couple of cameos which are a pleasantly surprising diversion.

While their music and songs may ooze quality and class, O’Hooley & Tidow are as grounded as they come. At the time of writing their website proudly announces they’ve sold out the gig at Bolster Moor Farm Shop, while  their pet cats get pride of place in the credits. Small things that mean a lot combine to  produce a grown up album.