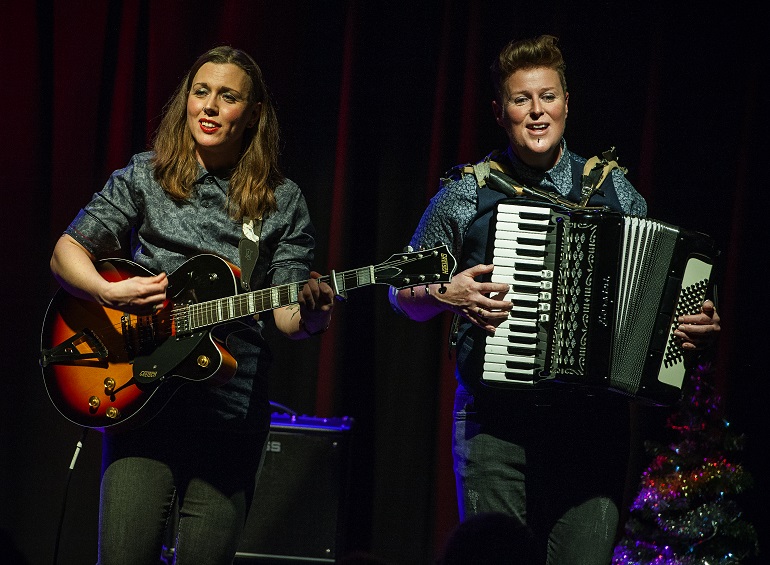 O’Hooley & Tidow’s WinterFolk album (our review here) took the notion  of seasonal album in a different direction. It takes the chance to redress the usual imbalance in favour  of the warm sparkle and glitz with a healthy dose of reality, a dash of melancholy and a few flakes of bleakness thrown in. Nonetheless, a riveting experience.

They could also deservedly post up the ‘Sold out’ signs in Bury, packing out The Box – The Met Theatre’s downstairs little cousin.  Don’t be fooled by the size of the parcel though; bear in mind  the old adage that  the best things come in small packages. The amount of gigging that the duo have under their belt saw what was, after  several years of O’H&T watching, a performance that ranked up with their best – put simply they’re in a rich vein of form.

Belinda O’Hooley’s piano playing, taking regular inspirations from visits to mid Wales and the Steinway piano at the Machynlleth Museum of Modern Art, massively underrated and the exchanges between the two voices is almost telepathic. At the heart though is a genuine personal and musical empathy.

Their WinterFolk tour has delivered a seasonal set that gathered old chestnuts and  reinvented some of their own material fitting into the Wintery theme. Notably it was The Last Polar Bear,  one of a clutch from The Fragile album that’s taken on a more radical rearrangement, although The Tallest Tree and  Calling Me remained more faithful.  As did the rollicking Gentleman Jack and the tribute to cycling heroine and general underdog succeeding against the odds,  Beryl Burton,  strong females that the duo specialise in championing.

What added to the special nature of the show were the regular excursions to the intimacy of off mic delivery as well as offering some musical variety, taking up the accordion and plugging in  Heidi’s brand new and very smart looking Gretsch to channel Richard Thompson on We’ll Sing Hallelujah (plus a typically resigned Down Where The Drunkards Roll). Oh, and the now customary Sooty & Sweep diversion with the kazoos.

Taking the revered Fairytale Of New York might be an abhorrenceto some, yet their reworking from a drunken romp into  desolate and despondent  heartbreak  is a masterstroke. An arrangement that epitomised their alternative musical take on Christmas; the “I could have been someone – And so could anyone” line delivered not with the usual  drunken bravado but a stoic  sadness and still with some faint glimmer of hope.

Songs of sadness, songs of hope with the occasional bout of tongue in cheekiness but always with a feisty twinkle in the eye.