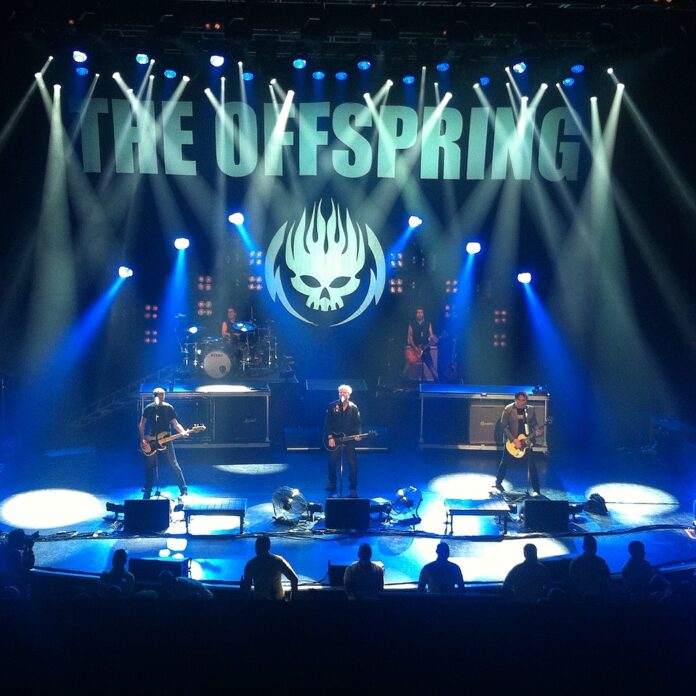 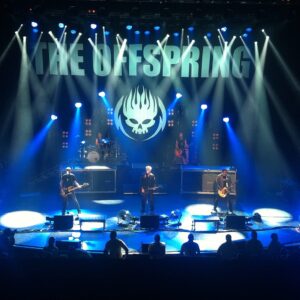 So-Cal Pop-Punks The Offspring prove they can still sweat, spit and swear like the best of us as they take to Manchester’s Apollo. Louder Than War’s Dave Beech was there.

Hindsight can be a fickle thing. A little over ten years ago, I saw The Offspring on the very same stage they’re about to take to this evening, and whilst the glasses I wore that night were clearly rose-tinted, I remember the snotty 14 year old I was thoroughly enjoying himself. As such, it’s with a cocktail of nostalgia and apprehension that we approach the doors of Manchester’s Apollo this evening, just as Pennsylvania’s The Menzingers plug in and allow the feedback to wash over the throng of people already in attendance.

Not often one for sitting at gigs, tonight’s positioning, front and centre in the circle, allows us not only a perfect view of the stage, but also of the crowd below us and makes for an unusually welcome change given the nature of the gig. Fortunately for the Menzingers, there are quite clearly more than a handful of fans here who know the band inside and out, and the jeers and boos that were aimed at The Offspring’s support just over a decade ago, are non-existent tonight. Just as well really, given that the band are on top form, playing a handful of tracks from across their career. It’s the material from 2012’s On The Impossible Past that seems to spark something within their fans though; the likes of The Obituaries and Burn After Writing converting more than a couple of naysayers. And whilst it’s difficult to imagine their own material not impressing, their cover of The Bouncing Souls’ Kate is Great surely softens anyone reserving their opinion until the final track.

With a burgeoning crowd sufficiently warmed up, Dexter Holland and co take to the stage to a deafening roar from a sea of ageing punks, though as with punk shows just about any other subculture is represented in some form or another as well – something which suggests that despite their age, The Offspring are still a band that harbour massive amounts of universal appeal, a facet of the band evidenced in tonight’s set.

Opening with You’re Gonna Go Far Kid, gets the attention of the younger crowd, but the majority of the tracks come from Americana and Smash, two albums which essentially paved the way for the band to become the mainstream-crossover act they are. Thankfully these are the kind of sets we’re treated with when a band heads out on tour without an album to support, and tonight feels somewhat like a greatest hits tour, (with the surprise exclusion of Original Prankster), or even a farewell tour without the added elephant in the room. Indeed, tracks that have been Offspring staples for years now are blessed with a new lease of life and our intial fears of a band going through the motions prove unfounded; the likes of Want You Bad still sound fresh whilst the band’s heavier tracks, Staring at The Sun for instance, burn with a youthful intensity that makes them feel as if they were written yesterday and not nearly 20 years ago.

Though peers throughout the ’90s, it’s hard to imagine Green Day playing with as much conviction as Offspring mustered this evening, and though it’s hard to imagine Green Day doing anything of note these days anyway, Offspring are a band who have always straddled the line between the mainstream and alternative scenes comfortably, not letting fame (or cocaine) go to their heads in the same way several of their peers have. It’s for that reason the band are still able to play sell-out shows at corporate theatres and still make them feel like a club show in ’90s California. And with the air thick with the smell of stale sweat and stale beer, it’s only really the £4 price tag of said beer that belies such a feeling. Fantastic stuff.