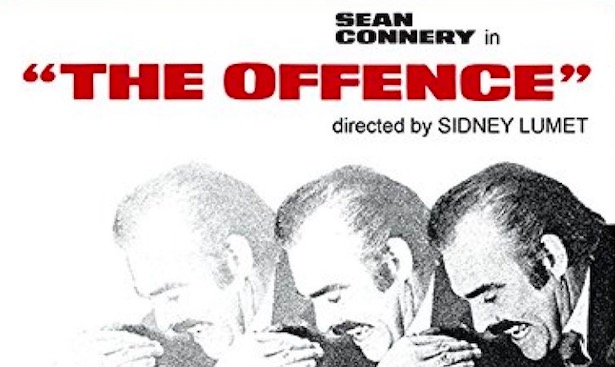 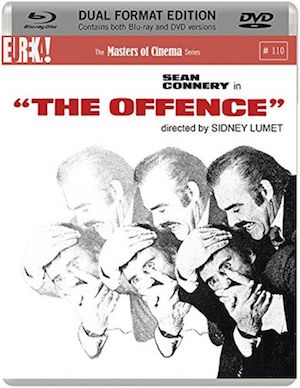 James Bond in Bracknell? Well, not really but after Diamonds Are Forever, Sean Connery handpicked this film as his ideal project. Jamie Havlin gives us his thoughts on the latest Masters of Cinema reissue.

Shot through a distorting lens and accompanied by a highly unsettling score, The Offence opens in slow motion at a police station where something has obviously gone horribly wrong. We hear no dialogue and for some moments we don’t know what is happening until we see that a man in a suit has obviously just beaten up three officers and another man and only seems to slowly register the implications of his actions as an alarm bell starts to sound.

The next time we see this man he’s arriving at a school where a number of parents dart suspicious looks at him as they wait to accompany their children home.

The man is Detective Sergeant Johnson and he is played by Sean Connery.

The Offence certainly exists in a world far away from the glamour of the Bond movies; here the clouds are grey and so is just about everything else. Well, either grey or beige with a backdrop of brutalist British new town architecture rather than any stunning Caribbean beach; instead of a glamour puss Bond girl, Johnson has a wife who he cruelly taunts about being plain and rather than any tux, Johnson wears a trilby and shabby sheepskin jacket with the Bond toupee nowhere to be seen.

He is rude, impatient and arrogant although you can easily assume that at one point he might have been a very good cop and he is still at least on occasion capable of demonstrating touches of tenderness.

It’s certainly difficult not to feel at least some sympathy towards a man whose job has required him to investigate more than his fair share of murders, sex crimes and suicides over his two decades of service and the effects of this have clearly taken their toll. In fact, it appears that he might be suffering from some kind of undiagnosed post-traumatic stress disorder. 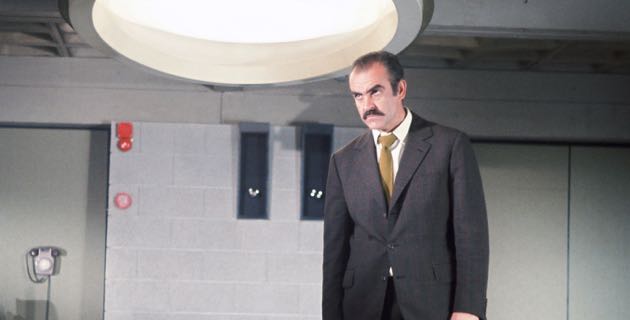 Johnson decides to take an unauthorized opportunity to interrogate a suspected serial child rapist Kenneth Baxter played by Ian Bannen and, convinced of his guilt, he goes berserk and beats the suspect savagely, possibly to the point of death. Dazed, he is instructed to go home by a senior officer.

The lengthy scene that follows between Johnson and his wife betrays the film’s origins as a stage play as do the next two lengthy scenes, both again largely duologues; the first an interrogation between Johnson and Lieutenant Cartwright (Trevor Howard), the man chosen to investigate Johnson’s behaviour and then a second look at Johnson’s interrogation of Baxter, where, whether or not Baxter is guilty, the pair appear psychologically to share much in common. A point that Johnson realises and which pushes him to snap.

‘You don’t even know what a mess you must be,’ a jeering Baxter tells him, just as Johnson is beginning to unravel badly. ‘Nothing I have done can be one half as bad as the thoughts in your head. I wouldn’t have your thoughts.’

You might not be surprised to discover that the film bombed at the box office and it’s difficult to imagine anybody ever imagining long queues forming outside any cinemas to see it. The Offence is harrowing throughout and it is also a complex and highly ambiguous film with an odd though inventive, non linear structure.

The Offence, though, is one to appreciate rather than necessarily enjoy and Sidney Lumet, who would soon go on to make classics such as Serpico and Dog Day Afternoon, coaxes excellent performances from everyone involved. The director, who had already collaborated twice before with Connery, really does get the best out of the iconic Scot, who is usually perceived as a ‘movie star’ rather than as a very talented actor.

This is definitely one for fans of gritty British cinema and is presented here for the first time on Blu-ray in the UK as part of The Masters of Cinema Series.

Extras include an optional isolated music and effects track, video interviews and a 36 page booklet featuring a vintage interview about the film with Sidney Lumet and more.