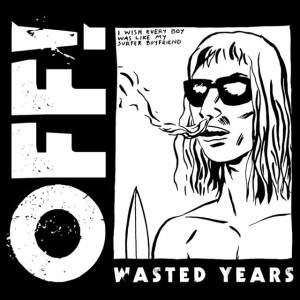 LA hardcore punk band OFF!, the guys with the punk rock pedigree as long as long can be, release their eagerly awaited third album today. For Louder Than War, Sean Smith reviews.

Raymond Pettibon art that screams with sneering hardcore authenticity. A ridiculously lengthy tracklist, yet clocking in at under twenty five “punk as fuck” minutes. A production style that lends the record the feel of a classic-era SST release. A cast of characters with storied backgrounds you could write a book about. This, my friends, is the new album from OFF!, the Keith Morris-led, strictly old-school gang of scene survivors; a crew who operate with a joie de vivre and shredding buzzsaw verve that was missing from the recent myriad Black Flag reunions.

Despite the album title, nothing is wasted here. The noise begins in earnest with the terrific “Void You Out” – Morris delivering the throaty yells to accompany Dimitri Coats’ raucously savage riffery. When such a legendary figure as Morris is heading things up, it is easy to forget what a badass rapsheet Coats has himself. Burning Brides are one of the most slept on bands to come out of anywhere, anywhen, yet shorn of their more groovesome tendencies he is in his element here, delivering bursts of bang-on guitar noise.

With a stupendous rhythm section underpinned by Steven Macdonald of oft-misunderstood alt-legends Redd Kross, and the primal beatings of ex Black Heart Procession and RFTC stalwart Mario Rubalcaba, Wasted Years ploughs through its seventeen songs with breakneck pace and focused energy. When they do deviate from the template and dare to exceed two minutes, you are so caught up in the action you simply fail to realise as “Hypnotized” dares to do something a bit different. The titles are blessed with a glorious nihilism that instantly sets those hearing the “Anthony Kiedis’ fave punk band” shouts fear to rest. “Death Trip On The Party Train”, “Meet You God”, “I Won’t Be A Casualty” are all defiant screeds of gutter noise, the antithesis to the Chilli Peppers and their tired funk.

Incredibly, Keith Morris is now into his fifth decade, yet he revels in pummelling your senses with banger after punk banger with an energy that puts most young bucks to shame. There is absolutely nothing here that is pushing the musical envelope or exploring new sonic territories. What you see is what you get when you read the liner notes and peep the artwork. But in a day and age where our heroes are falling left right and centre, where our own musical and cultural heritage is being eroded away slowly and surely, it is a complete thrill to hear some deft old hands thwack you in the goddamn head a bunch of times, and do it proper.

OFF! have just announced a UK tour for October. Support for all dates will be Cerebral Ballzy.