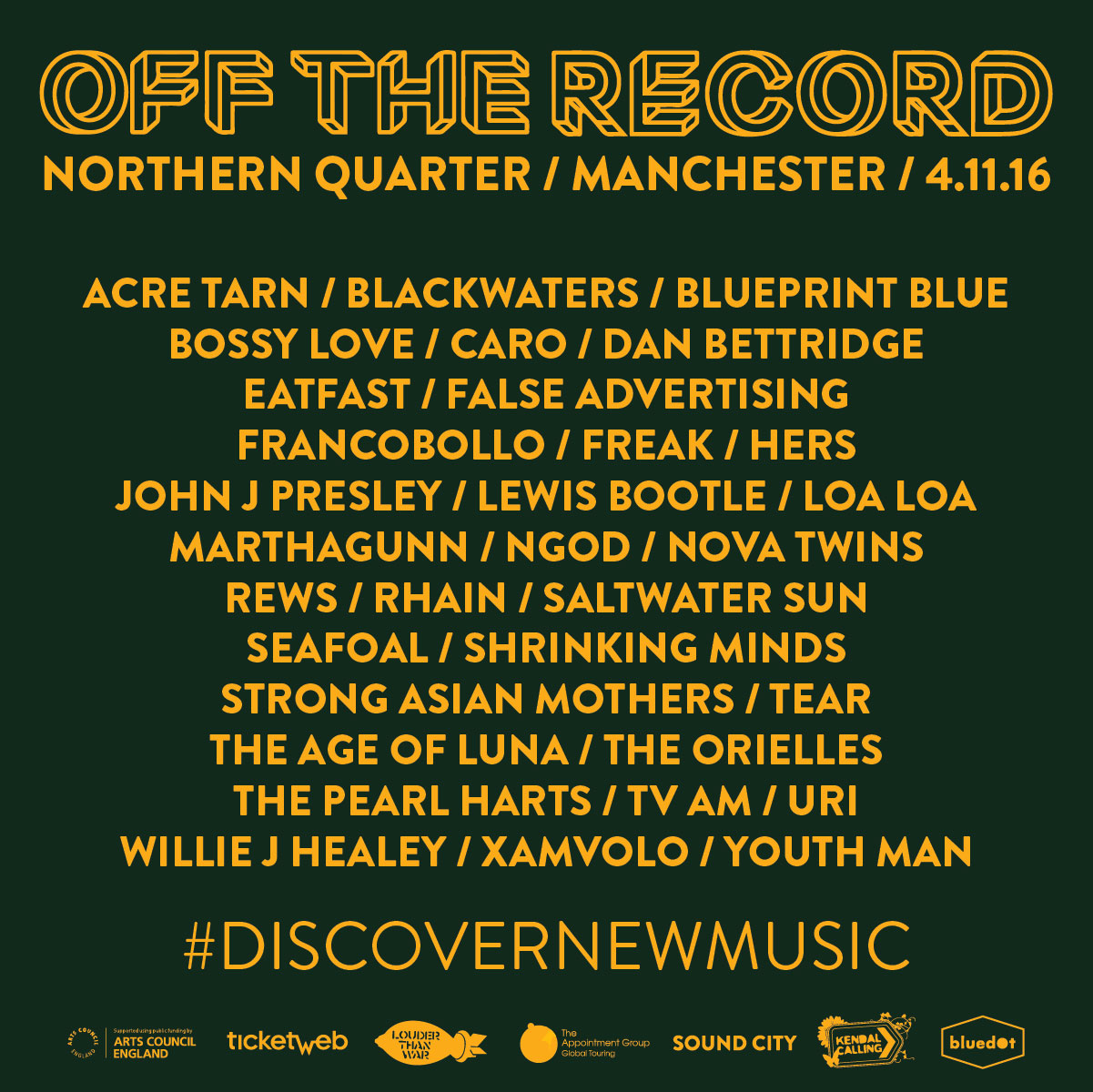 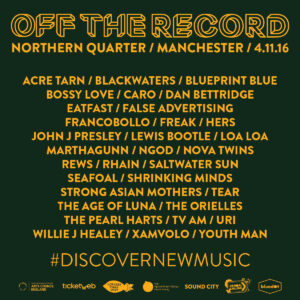 LINE-UP OF ARTISTS REVEALED FOR OFF THE RECORD n- all bands will play in Manchester’s Northern Quarter.

In the daytime there will be a music conference with panels and special guests.

Brand new emerging multi-venue music event and conference Off The Record have revealed the until now under wraps line-up of new artists performing across 6 venues in Manchester’s Northern Quarter on 4th November. For announcement from 10am on Thursday 3rd November, below is the full line-up of emerging artists listed by performance venue and set times, detailing which curator chose them to perform at Off The Record Live.

– as chosen by Frank Turner

– as chosen by Tim Burgess

– as chosen by Frank Turner

– as chosen by Andy Smith (Futuresound)

– as chosen by Tim Burgess

– as chosen by James Moodie (Vevo)

– as chosen by Simon Pursehouse (Sentric)

– as chosen by Joe Frankland (PRS For Music)

– as chosen by Chris Bye (Arts Council) and Phil Saxe

– as chosen by John Robb (Louder Than War)

– as chosen by The Line of Best Fit

– as chosen by Shell Zenner

– as chosen by Danielle Perry

– as chosen by Lara Baker (Aim)

– as chosen by London in Stereo

– as chosen by Adam Ryan (The Great Escape)

Off The Record is all about NEW music, showcasing different artistic styles and innovative ideas. Following the daytime conference, which features discussions and panels from the likes of Everything Everything, Tim Burgess, art director Brian Cannon (Oasis) and photographer David Drake (The 1975) and many more, Off The Record Live will cast a powerful spotlight on the best new music, hosting showcase performances by a host of emerging artists across 6 legendary performance venues within 5 minutes walk from each other.

The cutting edge line-up has been chosen by national curators such as Guy Garvey, Huw Stephens, John Kennedy, Tim Burgess, Lara Baker and Elizabeth Alker, to name but a few, who have each put forward hotly tipped emerging artists, defined by only having been together less than 24 months and having not yet released an album. With a huge focus on the undiscovered, Off The Record has set themselves apart by choosing to not announce the line-up to the public until 24 hours before the event. Curators say;

“It’s like being in some kind of secret society – there’s rolled up trouser legs and coded handshakes going on.” Tim Burgess

“I just like the idea of Off The Record, that element of surprise. Sometimes you put loads of new bands on a bill and because people don’t know who they are, they don’t go. I like that you’ve just got to trust the festival & the curators and just go for it.” Huw Stephens

A Spotify playlist of the artists performing is available to listen to or embed here: OTR Spotify Playlist. *Please note URI and Tear are not yet listed on Spotify*