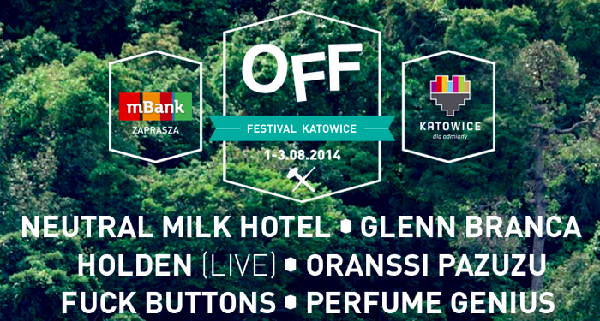 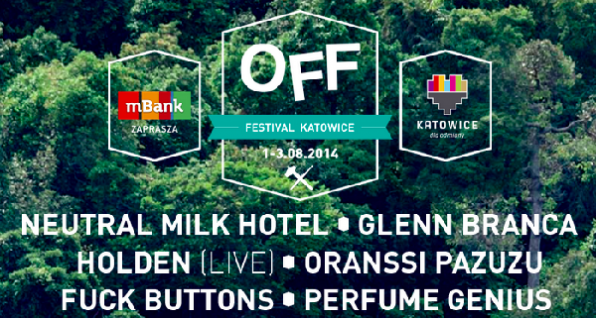 OFF is back! Indie rock, guitar experiments, challenging electronic sounds, intimate songwriting, and metal roller coasters – as always, OFF brings you a diverse program with the best alternative music. Come to Katowice on the first weekend of August and you’ll see Neutral Milk Hotel, Glenn Branca and his orchestra, Holden (live), Oranssi Pazuzu, Fuck Buttons, Perfume Genius, and more tba.

One of the most important scenes in American indie rock was the collective known as Elephant 6. And the most important record born of the imaginations of those musicians was In the Aeroplane Over the Sea by Neutral Milk Hotel. The now-legendary album is still guaranteed to evoke tons of emotions with its combination of folk melodies and lo-fi sounds. Jeff Mangum’s trebling voice sings stories that explore such themes as the tragic fate of Anne Frank. It wasn’t just the reviewers at Pitchfork who were impressed with the unique release (ranking it the fourth best album of the nineties), but also Arcade Fire and the Decembrists, whose music clearly echoes this wonderful band’s ideas.

In New York mythology, Glenn Branca is the god of noise and the patron saint of crippling distortion. He’s also one of the leading figures of the no wave scene. When his band Theoretical Girls failed to garner the response it deserved, he set out on a solo career. Since then he’s been recording deafening yet carefully composed guitar symphonies influenced as much by Steve Reich as they are by The Velvet Underground. Branca’s group was where the guitarists of Swans and Helmet began their adventures in music. Playing under his tutelage was considered such an honor that one friend of his followed Branca around for months, begging for him to let her boyfriend into the band. He agreed, and it’s a good thing he did, because her name was Kim Gordon, and his was Thurston Moore. The rest is history. Important announcement: Glenn Branca will be curating one whole day at the Experimental Stage! More details will be announced shortly.

He’s been gone for so long that everyone has pretty much stopped waiting for him to come back. But return he did, and he put everyone else back in their place. The Inheritors, his first album in seven years, has garnered excellent reviews and was hailed the best album of 2013 by the electronic music website Resident Advisor. And with the erudition this British artist demonstrates on his 70 minute release, it’s no wonder. Holden resurrects the memory of analog KLF synths, Cluster’s interstellar voyages, and esoteric 1960s British psychedelia. He doesn’t shy away from more dance-worthy forms, either, as proven by the ecstatic, house rhythms of”Renata.” This somewhat-forgotten decathlete won every possible event last year.

There’s a theory that states that all the best rock bands have a color in their names. You know: Black Sabbath, Pink Floyd, Deep Purple… It’s time to add Oranssi Pazuzu to the list (the first word means”orange,” while Pazuzu is the name of a terrible demon in Babylonian mythology), even though this band will never achieve the same status as the others. Not with this music, anyway. Sometimes referred to as the blackmetal Hawkwind, and at other times called the inventors of kraut-death metal, these Finns have figured out how to combine the trance and freedom of 70s psychedelic rock with the sounds of contemporary black metal. Oranssi Pazuzu’s third album, Velonielu, is one of last year’s best extreme music records. And you might want to check out some of the other acts on their label, Svart Records. This isn’t the Finland you thought you knew…

If there’s a place that needs another comeback of Massive Attack or Portishead, Bristol definitely isn’t it. The cradle of trip-hop has a new star that’s shining like a supernova. Andrew Hung and Benjamin Power started off by borrowing from Aphex Twin and Mogwai, and within a few years, their music was featured at the greatest mass event of the year. This was no music festival: it was the Opening Ceremony of the 2012 Olympics, where viewers across the globe heard the massive track titled”Olympians.” By no means have Fuck Buttons gone soft since that success. Their latest album, Slow Focus, conjures up apocalyptic visions accompanied by massive beats and an army of synths. This is the kind of music Giorgio Moroder would have recorded if he had been born in post-industrial Detroit.

Mike Hadreas’ intimate compositions reveal him to be the talented heir of Xiu Xiu and Antony & The Johnsons. Not only does he share their sensitivity, but the portraits he sketches out in his songs also seem to come from a similar lineup. Perfume Genius’ subjects are victims of violence, emotionally broken, future suicides nurturing their trauma. The music that accompanies these difficult stories is charmingly sparse and unsettlingly friendly. Lyrical piano phrases, delicate drum taps, subtle harmonies, and that voice: candid, fragile, and overflowing with emotion. Yet there is a certain boldness dormant in it, a bravery that compels him to take on difficult themes and surprising perspectives. YouTube removed one of his music videos, causing an uproar in the art world. He can be himself at the OFF Festival. To be honest, that’s exactly what we’re counting on.

Three-Day OFF Festival Passes are now available at the OFF Shop. These passes are valid for all shows at Three Pond Valley. The price of the pass is a low 180 PLN / 42 EUR! Hurry – the price goes up in March.

1. This year, the price of the pass does not include a camping pass. You can buy a separate camping pass for 60 PLN / 14 EUR (this lets you stay at the campsite from Friday, August 1, to Monday, August 4). If you buy a three-day camping spot and want to come to Katowice a bit early, you can purchase an extra night (Thursday/Friday) for 25 PLN / 6 EUR per person.

2. As always, we’re planning a Before Party in downtown Katowice on Thursday, July 31, but the event will be slightly different this year. To enter, you need to buy a separate ticket. A detailed schedule for Thursday night will be announced shortly.

A truly unique boutique music festival, OFF Festival takes place annually in August in ‘Three Lake Valley’, Katowice – a beautiful green oasis in the heart of industrial Silesia. OFF Festival is a way of life, one that flies in the face of current trends and stays true to itself, and the ethos of organiser Artur Rojek is firmly aimed at supporting art and music with the festival bringing many acts to Poland for the first time.

Growing in prominence year on year with this years event promising one of the strongest line-ups to date in line with Rojek’s forward-thinking, eclectic music policy. From the greatest alternative music stars from around the world to showcasing artists form the increasingly strong Polish scene, OFF has inspiring music in abundance.

Over the years, OFF has amassed its own demanding yet appreciative audience who come to witness Artur Rojek’s musical vision come to fruition. Having gained and a well deserved reputation in Poland and abroad, it’s not without reason that it has been said and written that OFF is the best alternative festival in this part of Europe and the only place east of Berlin where one can catch a glimpse of the boldest and eclectic acts on stages worldwide.

As well as music, OFF features a number of accompanying events: film, art, performance and poetry. It’s also an event which keeps the environment in mind – all food and drinks come in environmentally-friendly packaging and there is a big emphasis on recycling. It’s a completely safe place, an event where diverse tastes and appearances are welcomed and where everyone is the same because everyone is different.