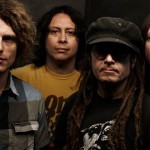 As we reported back in March, OFF!, the band formed by Keith Morris & friends, are releasing their debut album proper next month.

Last week they released tour dates as well as a video previewing another track off the album, this one called Wiped Out. The video is particularly notable as it was shot by renowned US underground photographer Richard Kern.

Having said that there’s nothing more raunchy in this video than some innocent kissing.

The upcoming Uk tour dates are as follows: