The crowd suddenly stepped a pace back from the stage…

The Toronto based 3-piece formed by Tzenos, drummer Jarod Gibson and bassist Denholm Whale complete the line-up, set about terrifying their audience with layer upon layer of metallic noise delivered with snarling punk attitude and a nod to surf culture!

Having recently released their debut album ”ËœHollandaze’ (Fat Cat Records) (LTW review) to critical acclaim the band have travelled for a full European tour, this being the penultimate UK date. A healthy crowd is present to experience Odonis Odonis sound, which is built from garage/surf foundations to then incorporate distorted layers of guitar, cavernous drum beats, a dash of Mary Chain style white noise all delivered with a rarely seen intensity ”â€œ a coupling of Big Black and The Ventures; Tzenos and Co are the bastard spawn!!
There are no stage lights ”â€œ there isn’t really a stage, just a raised platform; the band being lit by a projector; there is no barrier between band and audience as such the full impact and intensity of Odonis Odonis hits you full on, the bass drum plunges deep, the reverb howls. Current single ”ËœBusted Lip’ is immense; sheets of noise with Tzenos, his face contorted chanting the refrain, though this is surpassed by ”ËœAre We Friends’ ”â€œ it’s harder, its faster, it becomes entrancing as Tzenos sends his vocals through an effects processor, as the synchronized beats pummel you into submission. 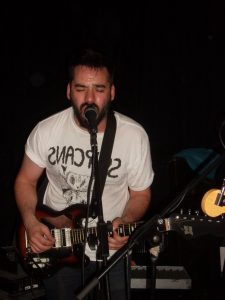 Despite the electronics Odonis Odonis retain a primal gutteral relevence that conects with the audience, who by now have taken tentative steps forwards – Glorious”Â¦