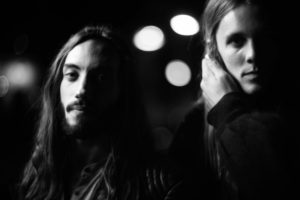 Odd Couple – Am I Evil (Cargo Records)
DL
Out now

Louder than War’s Ioan Humphrey’s has a listen to Odd Couple’s latest track from their second album Flügge.

Odd Couple are duo Tammo Dehn and Jascha Kreft and are two kindergarten pals from Ostfriesland.

When the duo started working on their debut It’s A Pressure To Meet You, released two years ago, their style was still very much in its embryonic stages. Now for second album Flügge (meaning “independent” or “to spread one’s wings” in German), the band are shedding their sultry garage-rock archaisms in favour of a grander, looser, style that takes influence from hip hop and the kosmische musik experimentation of West Germany in the seventies.

For this track, Am I Evil, the duo are gorgeously channelling reverb heavy psychobilly with their riffs, drums and effects. The initial intro builds up and up to a riff-tastic crescendo forst chorus that just baits the listener immediately.  The vocals are really big in the mix and compliment the noisy chorus.

The throbbing baseline that runs throughout is beautifully weaved between the psychobilly guitar line. This duelling continues all the way through until it is punctuated by a most wonderful pregnant pause, before the final assault and crazy solo takes us to the final abrupt finish.

This two-some seem to ingest and siphon the best (and noisy worst!) out of the last 40 years of rock, rockabilly, psychobilly and sleazy borbon soaked guitar riffs and solos and package them into a neat duo full of rage and riffs to die for. I approve.