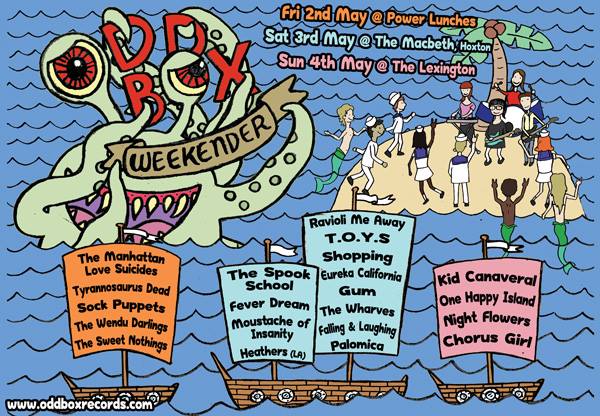 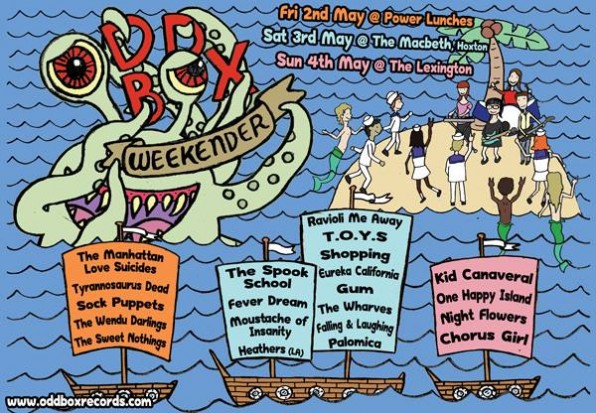 In May, Odd Box Records is turning FIVE years old and to celebrate they are holding their 4th annual Odd Box Weekender this weekend! There will also be DJs on Friday and Saturday night after the bands. And as it’s a BANK HOLIDAY WEEKEND there’s no fear of an early start on the Monday!

Playing during the weekend across three venues are:

Sunday will be an evening show (but FREE things will be happening in the afternoon) as part of The Hangover Lounge.

The Manhattan Love Suicides
Dressed in black, and back. Again. The best band of the noughties return nearly 5 years after they came to an end. New song ‘(Never Stop) Hating You’ shows they’ve lost none of their menace.

Tyrannosaurus Dead
Making noise, making heat. Their ‘Pure // Apart’ EP on Odd Box is something of a gem and live the band offer out and out attack with nods to Dinosaur Jr and early Ride. They stole my heart, let them steal yours.

Sock Puppets
Poppunk! Punk! Pop! Sock! Puppets! Coming over from Denmark we absolutely chuffed to have the Sock Puppets back playing the Odd Box Weekender.

The Wendy Darlings
Over from France and kicking off their tour for their brand new album ‘The Insufferable Fatigues of Idleness’ (Odd Box).

The Spook School
POP! FUN! Much merriment. Yep, it’s the latest Fortuna Pop HIT MAKERS playing their 2nd ever show for Odd Box. If their turn at the OBZINE all dayer back in October is anything to go by we’re expecting this to be a triumph.

Shopping
Creating a stir with their debut album ‘Consumer Complaints’ (Milk). Urgent rhythms, chaotic guitars create some of the best clattering pop music for many a year.

Heathers (LA. USA)
https://helloheathers.tumblr.com/
“(the) Slapdash pop-art pop of Teenage Clothes: punk’s energy meeting the broken-hearted crusade of 60s pop. It’s loud and it’s bright and it’s irresistible” so say Did Not Chart. Who am I to argue? To me it sounds like a brilliant and modern take on 80s classic indiepop.

To clarify this is not the other band called Heathers from Ireland.

Fever Dream
If post-punk bashed heads with shoegaze – you’d probably end up with a band that sounds like Fever Dream. Frantic shreds of guitar over that bass sound held together by tight as drumming. Easily one of the best live bands around at the moment.

The Wharves
The Wharves take that 60s girl group sound and meld it on to a guitar sound that would cut you at twenty paces. They’ve just released a great split LP with The Rosy Crucifixion on Soft Power.

T.O.Y.S
Dangerously sharp drumming. Driving Fuzz Bass. Infectious Synths/Keys. T.O.Y.S are on a mission to make you dance to their motorik pop music.

Ravioli Me Away
Seriously brilliant all female trio from London. Everything you love about pop music distilled into one band: Invention, tunes, entertainment – Ravioli Me Away have it all.

Moustache of Insanity
They return. So Awesome. Nik and Bill reunite for the Odd Box Weekender.

Falling & Laughing
A duo from Birmingham. From the Odd Box stable. Their ‘Bunnyhood’ EP came out way back in 2010 (earlier?). Blurring the lines between pop and something other. They coined the term chord-gazing for their sound. I’d say they’re a bucket of fun and not to be missed.

Palomica
Nicol makes music as part of DIY superstars Frozy. When he’s not doing that he makes all kinds of stuff as Palomica – usually it’s musical. Excited to see what he comes up with for the Weekender.

Kid Canaveral
Top notch pop music from Scotland. Part of the Lost Map Records stable. Kid C first played a show for Odd Box back in 2009. “Packed with sing-along melodies, frisky jangles and a real sense of purpose. A jubilant and skilful racket.” say The List. And they’re not wrong.

One Happy Island (Boston, MA, USA)
Odd Box veterans One Happy Island are Brad, Shannon and Meghan. They’re over from the USA for a whistle stop tour promoting their new record (coming out on WeePOP!). Their songs are delivered on a myriad of instruments but underneath everything lies a huge beating pop heart. One of the great (and under-rated bands) of our times. Cherish them.

Night Flowers
Dreamy indiepop guitars. Restrained vocals. Their free download double A side ‘Single Beds’ and ‘North’ find Night Flowers channelling the essence of the earliest Pains of Being Pure At Heart to great effect.

Chorusgirl
A brand new band that I first heard this past weekend. A brand new band from Silvi from Mikrofisch. The two songs on their sound cloud were just so good and beguiling that I had to book them!

You can get more information at The Oddbox Records Facebook Page.

Tickets  are on sale now from Odd Box Records.