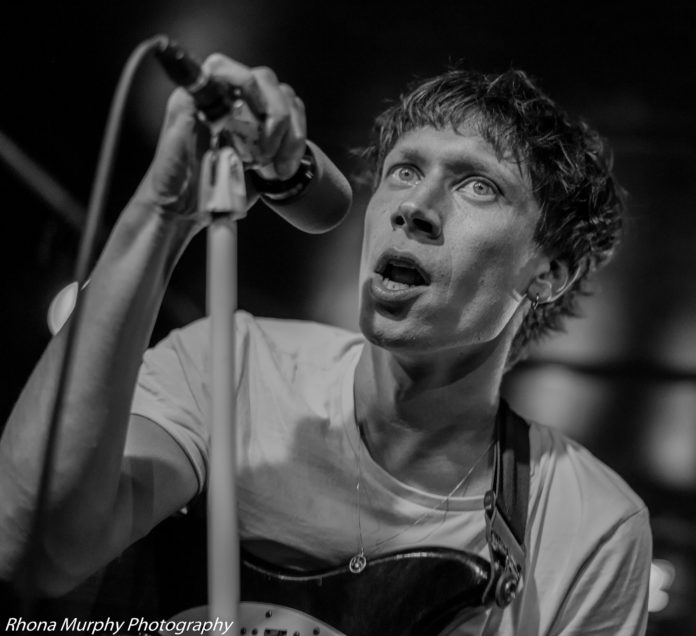 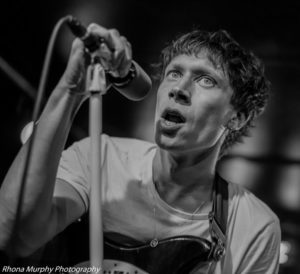 Back in 2015 October Drift were featured as a New Artist of the Day on these pages. One or two other writers felt the need to feature the bands tunes over the next couple of years and in 2019 Keith Goldhanger returned from Liverpool Sound City hailing them the best thing he’d seen during the three day event. The band came to London recently so we just had to be there.

October Drift are in Camden town tonight at the Black Heart, an upstairs room in a pub that’s looking more like a venue nowadays and sounding like an airport runway. It’s loud in here tonight, really fucking loud.

Coming onstage to ‘Underworld’s ‘Born Slippy’ (always good to feel that particular bass drum) the four piece throw themselves into the show from the moment the guitars are held at ‘rifle height’. During the not so frantic moments band members stand with their mouths open, staring at the ceiling, fully concentrating on what they’re doing and ready for what they’re about to do. Once the loud bits kick in they’re throwing their torsos around as if someone had told them not to worry about the music as that could be over dubbed onto the spectacle later. The four piece are playing these songs at the same time though and that’s the amazing thing about having this band standing in front of us on a two foot stage (we didn’t measure it).

The songs October Drift are performing are songs the uninitiated will certainly fall in love with instantly. The people in this room this evening have certainly arrived knowing what to expect and by all accounts the rest of the tour has attracted a similar fan base. A fan base that’s modestly spread around the UK at the moment that seem to know all the songs, know all the words and treat an October Drift show as their big night out.

So where are this band going from here then?
Well an album would be a decent start (January 2020 we’re told). There seem to be enough songs available on the usual music platforms already to suggest one could exist (and i suppose it does if you’re not bothered about stuff like covers, lyric sheets and track orders) and another decent tour support wouldn’t do them any harm soon either (they played a few dates with Editors last year which must have attracted a huge percentage of today’s fan base). There’s plenty of folk that still haven’t witnessed this band yet though and that needs addressing.

Forty minutes of rousing, emotional, loud and anthemic fist in the air songs that fit into 2019 as much as they could have in 1985 and as audiences from that decade can still be seen paying pay big bucks to see the now older and not as exciting anymore Psychedelic Furs (or even those that can often be seen nipping back to the bar during the quieter moments of Interpol concerts) we know that the big wide world needs to know that this band exist.

October Drift are currently thrashing away whenever possible and waiting for bus loads of people to suddenly realise what they’re missing out on. The audience exists, the band exists and sooner or later the two will meet up and once this happens tears will flow, lovers will meet and memories cemented for ever.

A superb band with superb tunes that you’ll be glad you’ve heard as soon as you hear them. Don’t let October Drift become one of those bands that got away. Grab a listen now and see you all next time.