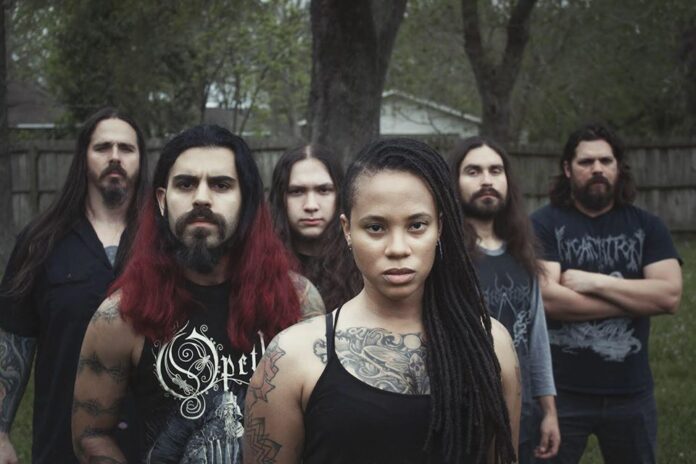 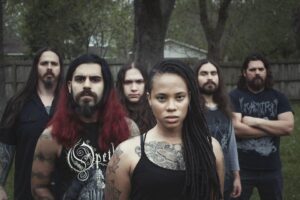 With not a mediocre track in sight, Ocean of Slumber’s self-titled album is likely to be one of the best doom/prog metal releases of the year. Alex Yotova has been eagerly awaiting its release and is not at all disappointed.

Oceans of Slumber, the Texas-based rising stars of doom metal, released their self-titled fourth LP on 4 September and it is a work of art. The music is composed by drummer Dobber Beverly while the lyrics are penned by vocalist Cammie Gilbert. The final mix is completed by Dan Swanö, the Swedish production guru who has a serious track record in mixing great doom metal.

Between May and August the band offered us a taste of what was coming in the form of four singles from the album, which I thought were all technically great, very touching and powerful but couldn’t imagine how they’d work together as part of one whole. Listening to the album from start to finish erased my doubts. The record is substantial, with 12 tracks, most of which over six minutes in length, and is almost conceptual in terms of its musical and lyrical message.

Oceans of Slumber are mostly referred to as a progressive metal band but this doesn’t really describe the mood in their music. Since their beginning in 2011, they have positioned themselves as doom metal, notably having toured last year in support of Swallow the Sun’s striking 2019 record, ingeniously titled When a Shadow is Forced Into the Light.

Ocean of Slumber’s new album is versatile, with tangible doom influences in the form of slow heavy parts and dark lyrics. This amazing record contains some very lyrical pieces alongside death/black inspired elements with growling vocals and seriously heavy instrumentation. The drumming draws attention as extremely technical, which isn’t new for this practically drummer-lead band. There’s a lot going on in most songs, but a few are instrumental and serve as transitions giving the record a storytelling quality.

The album is rich in contrasting sentiments – mellowness and harshness go hand-in-hand, and its influences range from black/death to gospel and film scores. My favourite track is Pray for Fire, which was released as a lyric video on the day of the album’s release. This is a grand seven-and-a-half minutes long track going through many breath-taking transitions. The lyrics describe inner struggles and a realisation of the need for change.

The band itself state that the songs have an anthemic quality and this is definitely true for both Pray for Fire and the following track, A Return To The Earth Below, which was released as a single in June. Another great single, which sounds even better in the context of the album, is To the Sea, standing out with its unusual for the doom genre gospel influence.

To the Sea is one of the tracks that set the band apart and could bring interest to the genre from open-minded music lovers not normally into metal. The same goes for the next ballad, Colors of Grace, which features a guest appearance by Mick Moss from Antimatter, one of my favourite singer-songwriters. I particularly liked his input into the duet with Aleah a few years ago in Trees of Eternity’s song Condemned to Silence, where his voice complemented the female vocals perfectly. He’s done it again here with Cammie.

The rest of the record has a bit of a goth/autumn feel to it (I Mourn These Yellow Leaves, September) and finishes with a Type O Negative cover from the legendary ’96 record October Rust. Oceans of Slumber like a good cover (check out Night in White Satin and Strange Fruit) and are reportedly big fans of Type O Negative. Wolf Moon makes the album’s finale less dark, more playful and sensual.

I was amazed to read a review in Kerrang! referring to the second part of the album as “a tad one-paced”. Don’t start listening to the record if you aren’t prepared to dive into its story from start to finish, which takes around an hour. This is definitely one of the most interesting records of 2020 so far – emotionally powerful, technically masterful, and lyrically relevant. Cited by Century Media, singer Cammie has described the band as dark southern souls, passionate and emotive, violent and starkly beautiful. This nicely sums up my impressions from their fourth LP. One wouldn’t normally associate Oceans of Slumber’s style with Texas and this makes them even more interesting. The new record is sincere, deeply felt and thoroughly thought over.

You can find Oceans of Slumber online here: oceansofslumber.com. They’re also on Facebook and twitter, as @OceansofSlumber.

All words by Alex Yotova. More writing by Alex can be found at her Louder Than War author’s archive