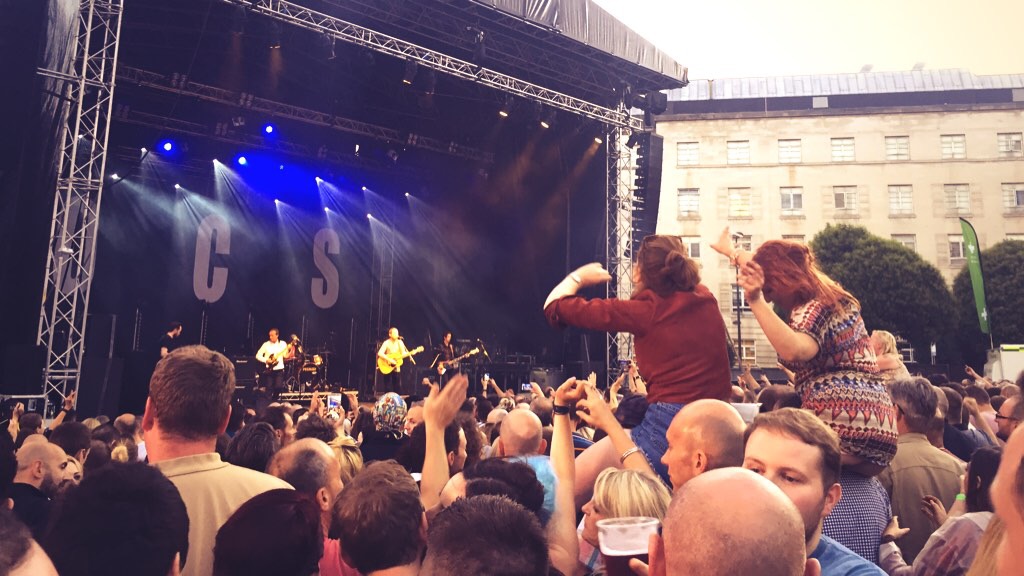 Marking twenty years since the release of Moseley Shoals Ocean Colour Scene are currently out on tour playing the album in full and doling out generous nostalgia as britpop contemporaries join them on the line up in Leeds.

Louder Than War editor Sarah Lay reports from the second of their two Leeds dates.

A plane flies low over the stage in Millennium Square, chem trails against the sundown clouds as it makes a descent to the nearby airport, while below a massive indie disco begins to take hold.

It’s the second Leeds date of the 20th Anniversary tour by Ocean Colour Scene for their legendary album Moseley Shoals. The late afternoon first-up bands may have nodded to the continued appeal of anthemic indie as Carnabells open and Reverend and The Makers get the crowd fully warmed up.

But it’s the top end of the bill which really pushes the audience’s buttons and gets them fully immersed in the nostalgia of 1996’s Britpop hedonism, ready for the headliners Ocean Colour Scene to play through of one of their best known and most successful albums.

The Bluetones have been out on their own 20th anniversary tour, marking the years since the release of their critically-acclaimed and well-loved debut Expecting to Fly. They are relaxed tonight and chat affably with the crowd about the gig and the city, all delivered dryly with a nod and a wink. Their biggest hits get the arms in the air sing-a-longs going and while album track A Parting Gesture is tenderly sung with heartbreaking poignancy it is 2002 single After Hours that resonates with the crowd tonight.

A toe-tapping, show tune paean to drinking it brings together the wittily literary lyrical style of the band with the very British way of romanticising the act of getting utterly, probably ill-advisedly, but generally merrily drunk. On a night where the length of the queue at the bar is as eagerly debated between strangers in the crowd as the sharing of memories and hopes for the music there is no song which better captures tonight’s atmosphere.

Shed Seven wear that mantle too; a band for dance floors and one-pint-too-many Friday nights. They are a band that give you the determined hedonism that comes from being work-weary; they are often pushed toward the ‘also rans’ pack of Britpop but time has shown this band has enduring appeal and a solid, dedicated fanbase. Whether it’s for the floor-filler of Disco Down, or being joined by The Seahorses’ Chris Helme for High Hopes, or the melancholy of Devil in Your Shoes, something special happens to an audience when Shed Seven take the stage.

Winding your way through this crowd as Chasing Rainbows hits you from the stage and echoes back from the Victorian grandeur standing sentry around the square and you will see the human connection distilled all around you. Here love between friends, rarely spoken but shown in moments like these, this shared experience of living in both past and present memories simultaneously; arms around shoulders, pints swilling down as words are bellowed up at the sky or into the next person’s ear. Further through this crowd there is the slow-motion bat of eyelashes over an absent stare as she holds her friend closer, consoles with the stroking of hair as beer tears make tracks through the glitter. And at the back a couple kiss, hands hidden in each other’s scant summer clothes. In one track you have the soundtrack to all those moments that define us, that are the memories that linger as the years fall through you.

And we haven’t even got to the main thrust of nostalgia just yet; we’re here to celebrate Moseley Shoals, probably the best known of Ocean Colour Scene’s ten album career. The hits from this album are part of the soundtrack which define the tail-end of Britpop, the last hoorah before the ’90s comedown began. They are a band who have navigating their way through different genres, explored different sounds over their long history, and in Moseley Shoals they captured the zeitgeist of its release year.

Playing the album through live, in the order tracks appear on the record, perhaps doesn’t work quite so well. It is a firework; the anticipation rises as they begin with their cover of The Beatles’ Daytripper, and there is awe that is almost giddiness as The Riverboat Song, The Day We Caught the Train and The Circle explode brilliantly in quick succession. But has the denouement come too soon? There are favourites throughout the rest of the album tracks but these are slower, the morning after rather than the throes of the night yet it never stop the crowd from becoming the rowdy choir, raising their voices to feel their memories stronger.

These songs have a distinctive sound, a clever use of tone and melody which elicited a sense of nostalgia even when freshly released. Moseley Shoals is an album which was rose-coloured, seeped in sentimentality even when newborn. The follow up album, Marchin’ Already, turns 20 itself next year and was in a similar style to Moseley Shoals. At the end of the set we get some of its tracks added in – Travellers Tune, Better Day and Hundred Mile City. It’s a way of celebrating the past and moving on at the same time. The passage of years, the carrying of these songs with us through the lives we’ve lived and the age we’ve gained, adds a poignancy to the love people have; it all means the same and it means something altogether different to us all individually and collectively than it did back in the day.

More than anything these are the songs that are the sound of the end of the working week, the clocking off and the time of your own. Tonight it is amplified over two decades – all those working weeks and bitter ends and sweet beginnings wrapped in the weariness of the daily grind; we feel them, we free ourselves from them with raised voices and the camaraderie of knowing the strangers around us have felt it all too.

All words and images by Sarah Lay. Sarah is editor of Louder Than War and you can find her on Twitter or find her author archive here. She also provides the LTW recommended track of the week on Radio Andra’s The Rumble – tune in every Tuesday from 8pm or find the podcast here.