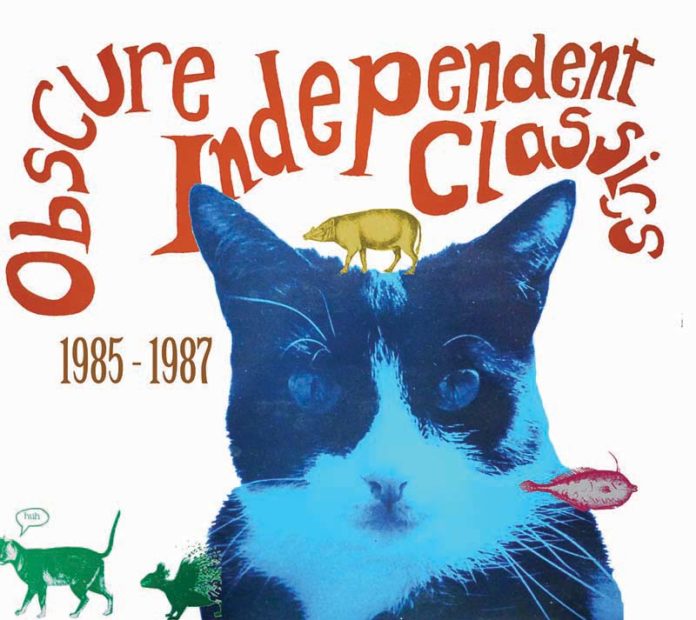 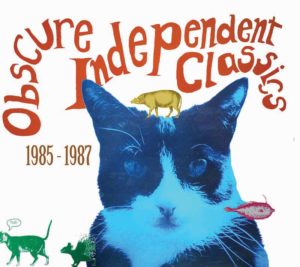 CD reissue of the best of the album series, four volumes of which were released in the 1980s by Cordelia Records, with a fifth emerging in 1988 on the Hamster label. Ian Canty looks back to the time B.I. (before internet) when obscure truly meant obscure.

It seems mad looking back, but back in the 1980s when records were deleted that was about it: you couldn’t find them anywhere. Scouring second-hand shops and record fairs, often fruitlessly, was the only alternative. Today you can find a collection of just about every form of music, covering artists that sometimes weren’t even well-known enough for a cult following. You can easily find out information on most any musical combo you might choose on the net. Back then you had to be incredibly lucky to find your quarry of rare vinyl and finding out about more “off the beaten track” performers meant trawling fanzines and the music press yourself.

Which is why the Obscure Independent Classics series, compiled by Alan Jenkins for his Cordelia Records imprint between 1985 and 1987, was invaluable. Jenkins put together the sets through old-fashioned hard work, writing to people all over the world to get tracks, as well as the people he would meet recording/playing alongside in Leicester. In doing so he managed to catalogue unusual sounds from around the globe in a way few have managed to emulate even today.

I recall being overjoyed by finding Yeah Yeah Noh’s rare cut Trini Lopez on volume 3 (I remain a massive fan). The Wimps’ Modern Girl is a stone cold forgotten punk classic and was featured on Volume 2 (both tracks turn up here, much to my delight). A a few slightly better known bands were featured. The Freshies’ feisty powerpop of My Tape’s Gone and Terry And Gerry’s Everly Brothers aspirations on Kennedy Says spring to mind, but they hardly qualified as famous.

Yet even these albums were pretty difficult to get your hands on. Digging around the local record shops I only managed to find Volumes 2 and 3, the others remaining tantalisingly out of my grasp. The two I did find reflected the broad mix of styles in the series and were tremendous delves into the unknown. There were literally no borders for this series. Punk, “difficult music” made up of found sound, New Wave pop, electronica: it was all here under one umbrella.

Obscure was an accurate term and a lot of this material hasn’t seen the light of day since. Jenkins was of course the main-man of the Deep Freeze Mice, who provided more than their fair share of obscure classics if I’m any judge. So it’s fitting that they turn up with their driving piece of Psych Punk No. 9 on this new compilation seeking to highlight the best of the series. As might be expected from the above, this is a whistle-stop compendium of indie sounds a step further into the unknown than even the Peel Show dared to tread. Strange, no very strange, from the cat sleeve photo inwards….

The Kamikaze Sex Pilots are better known for the independent spoofing Sharon Signs For Cherry Red, but here on their sequel Sharon’s Been Deflowered And Defoliated they sing “She really likes a band called Tears For Fears and she’s got nothing between her ears” to accompaniment of buzzsaw guitars. A pretty good starter and not unlike the Shop Assistants. Algebra Suicide’s mixture of electro, guitar fuzz and cool female vocals beguile on True Romance At The World’s Fair, which for some reason made me think of the Velvets, and the Fire Hydrant Men put Garage Punk and indie-pop together in winning style on Oh No Not Another Night In NATO.

Later on we find the Disco Zombies with an unlikely terrace classic in Where Have You Been Lately Tony Hateley? followed aptly enough by Jackie Charlton Says by the Jung Analysts. Jesus Couldn’t Drum’s Theme is two parts Bo Diddley to one part Eighties rockabilly, but the Swimming Mannequins are of a more post-punk bent on the neat Bodega Bay. The proto-industrial experimental sound of P16.D4 from Germany on Strauchelnde Saulen A Go Go is the possibly polar opposite of Rich La Bonte’s rather great New Wave pop nugget She Wants No Alibis, but they still charm equally in their disparate ways.

The rum and novel nature of what is on show here means relatively straightforward offerings like Andrew Nicholls’ piano piece Across The Water and the Country Rock Boogie of Rococo Rocks by veteran Paul Johnson acquire a veneer of weirdness by association. Japan’s Circadian Rhythm only seemed to have put out a sole EP in 1986, a shame as the manic panic of their Gulliver Takes A Walk is a real breeze.

Alvaro Peña-Rojas was a bandmate of Joe Strummer in the 101ers, but his crazed rant of Drinkin’ My Own Sperm is about as far away from the Last Gang In Town as it could be, full of stops and starts, gibbering vocals going on about “endless cups of tea” and some curiously pretty pipe music. You won’t hear anything else like it! John Trubee And The Ugly Janitors Of America sign things off for the set with Magnificent March Of The Dead Monkeys, a longish piece of near-prog noodling, but pretty smart nonetheless.

It is a testament to this series that even in these days when everything seems to be available, the sounds featured on here have rarely been reissued, confirming the status bestowed on them by the title. It also helps retain the fresh impact the original series had way back when. I can’t say you’ll treasure every selection, but each will broaden your outlook a little. It’s a selection box that keeps on giving. Obscure Independent Classics 1985-1987 is a compilation with a little something for everybody, in the truest sense.