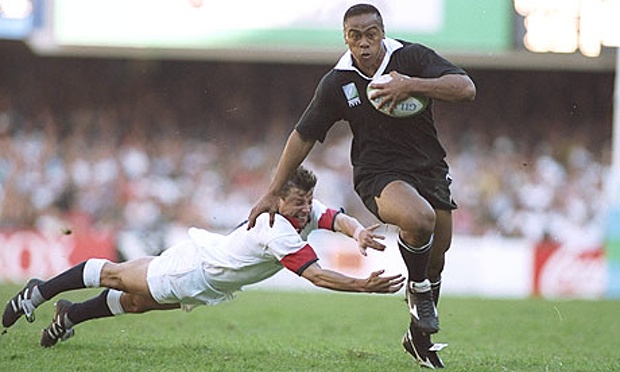 Every sport has its transcendental icons, those who have not just eclipsed their peers but appeared to have been brought in from another plane. Baseball’s Babe Ruth, cricket’s Don Bradman and squash’s Jahangir Khan hold records that will almost certainly never be broken; Basil D’Oliveira and Muhammad Ali lifted sport to something beyond mere entertainment. Even among mere humans there are the likes of Sachin Tendulkar, Ronaldo (the original) and Michael Jordan who, in their era, stood clear of their contemporaries.

Jonah Lomu was rugby’s answer to them. There were greats before, there were unstoppable All Black wings before – John Kirwan springs to mind – but Jonah was unique among them. In a sport that gave us Gareth Edwards, Barry John, Serge Blanco and David Campese, Lomu was its first global superstar. He was the man who made Rupert Murdoch sit up and take notice, dragging the sport into professionalism 20 years ago like an England tackler clinging on to the back of his shirt.

It wasn’t just through his star power that Lomu transformed rugby union. The 6’5”, 19st wing, who could run the 100 metres in little over 10 seconds, scored four tries in the 1995 Rugby World Cup semi-final against Grand Slam-winning England, aged just 20 and including his famous effort in which he quite literally ran over three English tacklers. Afterwards, England’s captain, Will Carling, described him as a “freak”. Nowadays, when rugby’s biggest names include the likes of Nemani Nadolo, George North and Julian Savea, giant, powerful, fast wings are commonplace. Lomu was not just their prototype, but a mountain of a man who would stand tall among them even now.

Lomu arguably did more than any other individual to popularise his sport. According to legend, on the eve of the 1995 final a fax came through to the New Zealand team hotel: “Dear All Blacks. Remember rugby is the ultimate team game. Make sure the other 14 give the ball to Jonah.” He may never have won the sport’s biggest prize, but if social media is anything to go by, he was the man who single-handedly inspired a huge swath of my friends to take an interest in or take up playing rugby.

His rampaging first try in that semi-final at Newlands, Cape Town was recently voted the greatest in World Cup history. There are numerous highlight videos online but you could create one solely from his performance during the 1999 World Cup defeat to France. He was part of a great team but shone brightly even in their rare defeats.

I never met Lomu but my colleagues in the rugby media will not talk about this greatest of athletes without mentioning his humble, loving nature. Lomu was a vocal supporter of New Zealand’s conservative political party but it speaks to his character – his warmth and humility – that this never sat uneasy with either the rugby press or the sport’s cosmopolitan, varied global fan base by whom he was so beloved. He grew up in a rough society blighted by gangs and by all accounts had a difficult childhood, but eschewed the violence that surrounded him to inspire others to reign terror upon the world in the sporting arena. His strength of character shone through be it as a young man thrust into the limelight two decades ago or as an ambassador for the sport here in England during the most recent World Cup.

2015 has been the proverbial bittersweet year for New Zealand rugby. The All Blacks made history with their World Cup triumph and were rightly acclaimed by many as the greatest team ever to play the sport. Yet they have lost two of their most iconic and popular figures: Lomu’s death at the age of 40 follows that of the flanker Jerry Collins, who tragically died in a car crash aged just 34 in June. Their great nemesis in that 95 final, the South African scrum-half Joost van der Westhuizen, is terminally ill with motor neurone disease and will soon be gone too.

For many of us, these were more than men we idolised. They were indomitable indestructible supermen – you would rather try and stop a Chieftain tank than tackle these men who simultaneously terrified us and made us gasp in awe. You could put Collins, Van der Westhuizen and Lomu alongside the Hulk and Thor in the next Avengers movie and they would not look out of place. To lose them all so young is both humbling and shocking.

Dan Lucas is a sports writer for the Guardian and Daily Telegraph.