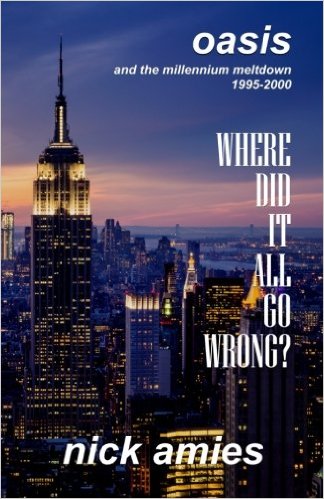 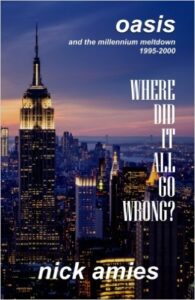 Where Did it All Go Wrong?

Hardcore Oasis fans will find little new material in this book. Nick Amies states at the beginning that there is no band involvement and with the exception of Johnny Hopkins (their press officer during this time) there aren’t contributions from those around the band either.  Essentially this book, by the author’s admission, is a deep trawl of the internet which unearths a heavy net of notebooks. These detail interviews, reviews, quotes from TV and radio,  painting a close up portrait of a band at the height of their fame, grappling with both the opportunity and pitfalls it presents. We get lots of insight into the (often opposing) mindsets of the Gallagher brothers and can trace almost their every footstep for much of these years – which just goes to show how much they lived in the public eye.

The book arrives in six chapters which are pretty dense textually. Paragraph after paragraph  populates page after page with no room to pause. Perhaps this is intentional and designed to illustrate how relentless the pace of their lives was (and it does)  but I found it quite tough going and feel the manuscript would have benefited with further editing and more breathing spaces –  by which I mean breaking up the text. A little less repetition and recapping would also have made for a more fluid read.

The cover borrows the cover of Standing on the Shoulder of Giants – a dazzling photo of the Manhattan skyline and as the title implies this is an account of only a portion of the Oasis story. Considering it’s just been published and fifteen years have come and gone since, it offers not even a brief comment on the aftermath of this era. This felt peculiar and it ends rather abruptly after the release of the aforementioned album. Still, it’s clear this is intended to be an account of that specific span of time and as Amies also references the rise and fall of “Britpop” and Creation records, we do vividly get the context and backdrop to these tumultuous years. So, if you’re curious about the history of the band during this era and interested in studying the often fickle and at times, sheepish reaction of press this book will give you a lot of information in a relatively linear sequence. The dialogue Amies had with Hopkins also offers some interesting details which help explain the circus that life around the band became.

If you love Oasis and can’t get enough of them then you will likely enjoy this book but if you’ve already waded through their extensive press cuttings and know their documentaries inside out I’m not sure how much you have to gain by reading, unless of course you just want to take a lengthy trip down memory lane and if that’s what you want, this is your ticket to ride.

All words Mary O’Meara. More writing by Mary on Louder Than War can be found at her author’s archive. Shee tweets as @maryblackcat1.