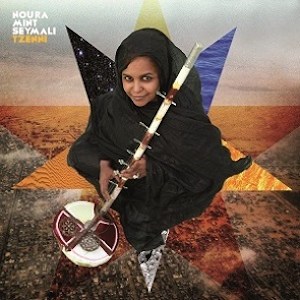 From the North West Mauritania region of Africa comes the daughter of visionary musical parents. The father of Moura Mint Seymali wrote the national anthem, her mother was a great vocalist herself. Noura performs the music of the Moorish Griots – imagine them doing their ‘spinning’ dance under tents in the desert or in crowded street occasions – the album title itself translating as ‘to circulate’.

The music on Tzenni is a fascinating mix of traditional music fused with Western influences such as blues and funk to create a sound which is quite unique. Speaking of unique, Noura’s voice is one which you won’t hear every day. The power and changes of scale are remarkable and almost an instrument in itself.

The guesting of husband Jeiche Ould Chighaly on tidnite unites with her own ardine (both types of guitar) to create a sound called ‘azawan’ which is intrinsic to Moorish traditional music. A curious sound which both races and interweaves perfectly with the added drums and bass. Its overall sound is actually quite poppy and maybe more mainstream than you’d imagine, the funky elements coming from the exciting bass and the background guitar work shaping the rhythm with almost ad-hoc sounding percussion.

The title track is particularly worthy of comment as is El Barma on which Noura’s voice comes into its own and takes centre stage almost pushing the instrumentation into the background. There are plenty of hooks too, not just vocally but instrumentally.

Forgetting the language barrier, the songs here are incredibly infectious and memorable. You’ll be humming the melody for a while after each track is finished. Produced by drummer Matthew C. Tinari and mixed by Dirtmusic member Chris Eckman, the sound is polished having been pieced together in New York, Slovenia and Senegal.

Album closer Emin Emineina Chou Weyne compiles several sections of poetry written about her Grandmother Mounina and is a hypnotic end to an enthralling album.