Home Music Reviews Album Reviews Not Tonight And The Headaches: Love … And Other Weapons Of Mass... 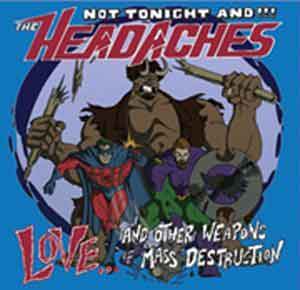 Not Tonight And The Headaches: Love … And Other Weapons Of Mass Destruction – (Boss Tuneage/Anarchy Entertainment)
CD/DL
Available now
8/10

All the way from sunny Grimsby a reminder of the sheer joyful energy of pop punk at its best from Not Tonight And The Headaches. idp enjoys the tunes and gets some shots of the launch gig.

Not Tonight And The Headaches are recently signed to the highly regarded Boss Tuneage label and managed by Anarchy Entertainment and their new album Love … And Other Weapons Of Mass Destruction, (a band and album name combination designed to yield the world’s most unwieldy url),  is a homage to the glory days of 1980s pop-punk when both sides of the Pacific were crackling with high velocity harmonies and the likes of Descendents and The Hard Ons ruled the roost and pretenders like Green Day and Blink 182 waited in the wings. For anyone who’s a fan of the sounds of those days then this album is both a blast from the past and an up to date reminder of the joys of banging your head to tunes you can hum – you just pop it in the player, close your eyes and you’re on a sunkissed beach, pleasantly stoned, watching girls and cracking rude jokes with your mates.

It’s a big chunk of pop punk goodness complete with huge chiming guitar riffs, relentless drums, call and response lyrical structures, great harmonies and loads of energetic brashness and songs about love and its vicissitudes. Most importantly it’s a real feel good album, – you’ll have trouble finding a downbeat moment in any of the fourteen tracks despite the fact that many of them deal with relationship breakdowns and the ensuing emotional carnage. Opener Waiting For You features a chorus of “Misery, I can’t stand it” but you get the distinct impression that the singer will get better soon. It’s just a phase, he’ll get over it.

There’s no room for angsty bleakness here, this is four guys having a great time and making some really good noise along the way. Highlights include Why So Serious, the irresistibly catchy My Head and Chewing Teeth, an unapologetic break up song that manages to be venomous, vindictive and quite cheerful all at the same time. In fact the whole album is irresistibly catchy and imbued with a full on pop sensibility which is most evident on a sensational high velocity cover of Jane Wiedlin’s Rush Hour which is worth the price of the album on it’s own.

Launch night was at The Yardbirds in Grimsby and it was nice to see the place full to support local talent. The bill showed the diversity and depth of musical talent that the town has to offer with openers Dead Dads, punks at heart but also acknowledging influences from Joy Division, Led Zeppelin and Paul Weller getting things of to a rousing start with some of their special bluesy punky stuff.

Next up East On Main – who draw inspiration from the likes of Latterman and Iron Chic – an uncompromising mix of melodic pop punk and huge bellowed vocals and See You In Tijuana, post rock, new metal and I’m starting to feel out of my depth so I ask them who they sound like and they helpfully suggest Pelican, Russian Circles and Mogwai and I’ve checked and they do, so there.

And the grand finale of course, Not Tonight playing the album right through and the crowd loving every minute – a real tribute to the continuing importance of local music scenes up and down the country and the power of making mostly because you enjoy it. Great stuff.

Not Tonight And The Headaches are on Facebook and BandCamp.

Bands in this review can be found at the following sites – Dead Dads, East On Main, See You In Tijuana