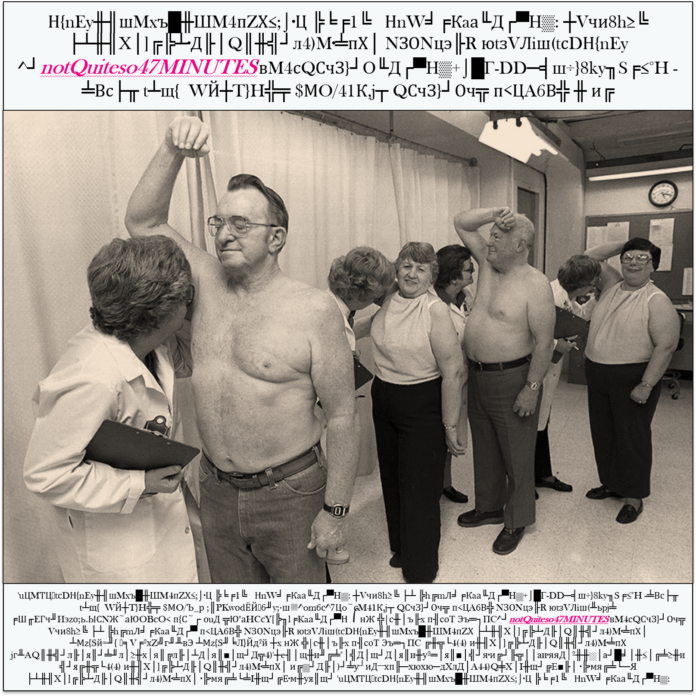 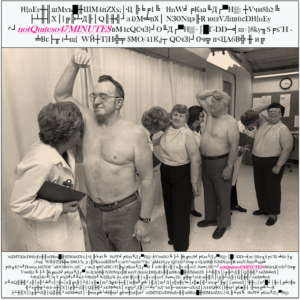 Out on 4th December – available here.

Not Quite So emerge with a collection of tragic-comic tales narrated over a rich electronic backdrop. It’s far from conventional, but is absolutely worthy of checking out. Gordon Rutherford reviews for Louder Than War.

Originally formed in a South London pub that is now the site of luxury flats, Not Quite So describe themselves as the collaboration of two ageing youngsters: writer/vocalist T. Ernest Wilbey and musician/sound designer/scientist (yeah, really), Janek Hendrich. The original plan was to develop an instrumental, quasi-techno project, until Wilbey discovered his voice. As discoveries go, it’s not on the same plateau as penicillin. Nevertheless, we should be grateful, for it has led to the creation of an incredibly engaging and ambitious body of work in the form of 47 Minutes.

Wilbey’s voice is not a singing voice, at least, not in the conventional sense. Instead, he deploys that laconic, gentle northern accent to recite his words on top of Hendrich’s electronic creations in a way reminiscent of Kae Tempest rapping out her poetry over a hip-hop backbeat. The end result is a series of ten richly crafted vignettes, little individual narratives projected on to a much larger canvas, creating an entire landscape of the modern world. The overall feeling is one of stark bleakness, initially numbed by Wilbey’s matter-of-fact pronouncements. Modern life is rubbish. Accept it. But listen closely and the messages truly resonate.

One of the most loveable features of this collection is the way that the themes veer from the human tragedies of everyday life to the surreal visions that dwell in Wilbey’s mind. We go from gnomic, biting commentaries on social injustice (This Nice Man and the drone soundtracked Change Colour) through fever dream nonsense (Vanilla) to names ruined by serial killers (Werneth Low). It’s like drifting in and out of sleep whilst Radio 4 plays softly in the background.

The aforementioned This Nice Man is a quite remarkable five and a half minutes of music. It makes your flesh crawl with it’s downright creepiness as it articulately addresses the exploitation of vulnerable people at the hands of county lines gangs. Our narrator has his house invaded by “this nice man” who “puts heroin in my arm” and “refused to leave”. It is quite chilling and the sense of misery is augmented by Hendrich’s sliver of elegiac, yet too brief, acoustic piano. It is a powerful story that is brilliantly written and accompanied by music which complements it perfectly.

Werneth Low, I learned, is a hill in Greater Manchester which forms part of the Pennines. Apparently, the views are stunning, as it affords a panorama encompassing the city itself and, to the south-west, as far as North Wales. Distressingly, we establish that you can also get a great view of Harold Shipman’s patch and the notorious Saddleworth Moor. Oh, and you can also see a “blue Swedish furniture store”.

It is also the title of the track which provides one of the musical high points of the album, as Hendrich’s discordant sheets of synthesis lash down on us, much like the rainstorms might on that exposed tor. Whilst that brings a sense of drama, on the surface we have humour. “My wife suggested we call our girl Myra”, Wilbey informs us, before stating that “I suggested that would be a bad idea” on the basis that “there was once a woman from near me who killed kids”. Initially, I couldn’t help laughing at this preposterous discussion between the characters. Wilbey’s unvarnished delivery is key here, just as it is throughout 47 Minutes. He has an incredible gift for taking tragic stories and delivering them in a blasé, detached way. It’s the way he tells ‘em. Listen carefully and, before long, the penny drops.

I have focused much on that voice and the themes of the tracks. Thankfully, the music stands proudly on the same plateau. 47 Minutes is an album of incredible musical diversity, full of glacial sheets of noise (Werneth Low), discordant dramatic electronic drone (Changed Colour), straight ahead, hooky, bass driven dance (God I Love You), industrial clanking and beeping (The Mortgage) and Eno-like ambience (SE15 2EZ). Hendrich brings it all to the party and provides the perfect platform for Wilbey’s stories. However, where the music is most effective is when the aurally overwhelming soundscapes suddenly give way to softer, acoustic-like, piano. The aforementioned This Nice Man is the perfect example of this, as is How Many Emails, where we have a sublime moment three and a half minutes in when that beautiful acoustic piano is re-introduced. Those moments, those fragile, porcelain-like pieces dovetail magnificently with the waves of electronica and complement the narrative perfectly.

It’s not a flawless album. One or two tracks are less engaging than the ones I have concentrated heavily on here. But, overall, 47 Minutes is a highly creditable album from Not Quite So. It makes you think and it makes you laugh and it’s unlikely that you will hear anything else quite like this. I could detail who this album is for, but I think the band themselves explain that best: “For fans of listening to Scott Walker at the wrong speed under fluorescent office lights, playing Arab Strap whilst overdosing on the news cycle, reading Alan Bennett over Blanck Mass. May clear the room at parties”. That about sums it up. As a duo, Wilbey and Hendrich clearly dovetail superbly and I am intrigued to see where they take this project.

One thing you can unquestionably say is that 47 Minutes is not a conventional album and I would like to close this piece by championing the unconventional. This is the second album released on the Wormhole World imprint to cross my desk in recent months, the other being Netta Goldhirsch’s Love Doesn’t Exist. It is an incredibly challenging time for small, independent labels and for artists like Netta and Not Quite So. As music lovers, we are dependent upon labels like Wormhole to get alternative, quirky, risky, courageous works out there. What if they disappear? What if all we are left with is the algorithmic, unit-shifting, safe and vanilla-flavoured banality of the likes of Coldplay and Ed Sheerin? Take a moment to reflect on that. So, I close with a heartfelt plea. Support small labels. Support artists like Not Quite So who are kicking against the status quo, ploughing their own furrow and daring to be different. Because the world will be a grey, drab place without them.