Home Blogs It’s not just Morrissey that says stuff that is awkward : can... 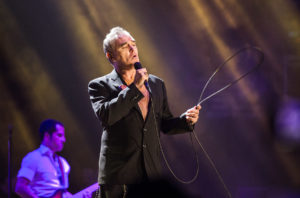 It’s difficult being a Morrissey fan.

I know few and their love of the man’s muse and voice and poetry and thrill of his svelte stariness is tempered every time an outrageous quip slips from his pursed lips.

Last week it was a comment about the UKIP leadership election, next week it will be another comment that is often left open ended with the nay sayers shouting ‘racist’ at the former icon of the liberal indie fan.

But Moz is not alone in this awkward equation. The assumption that most musicians are liberal leaning loveable types still somehow sits and yet for years there have been much loved bands with quotes that don’t sit that well in their public perception.

Can you still love the music and swerve the artist? Does it really matter what the person says away from their art? After all we don’t have to sit on a tour bus with them! And why is it Morrissey who is singled out for this backlash – admittedly his profile is still high but no-one ever clamoured at the much loved Ramones who would surely have played Donald Trump’s inauguration if they could have forced Joey into it, no-one ever says anything about Mark E Smith, no-one cares much about Mo Tucker and her love of the Tea Party even John Lydon only gets a tutting for his contradictory rants.

There are many other bands who talk a different talk from the idealistic agenda – perhaps this is better than the pretence that dominated the sixties where every perceived anti establishment artist was saving up to buy their country pile – Dylan and the Stones are loveable old rogues but were hardly rebels.