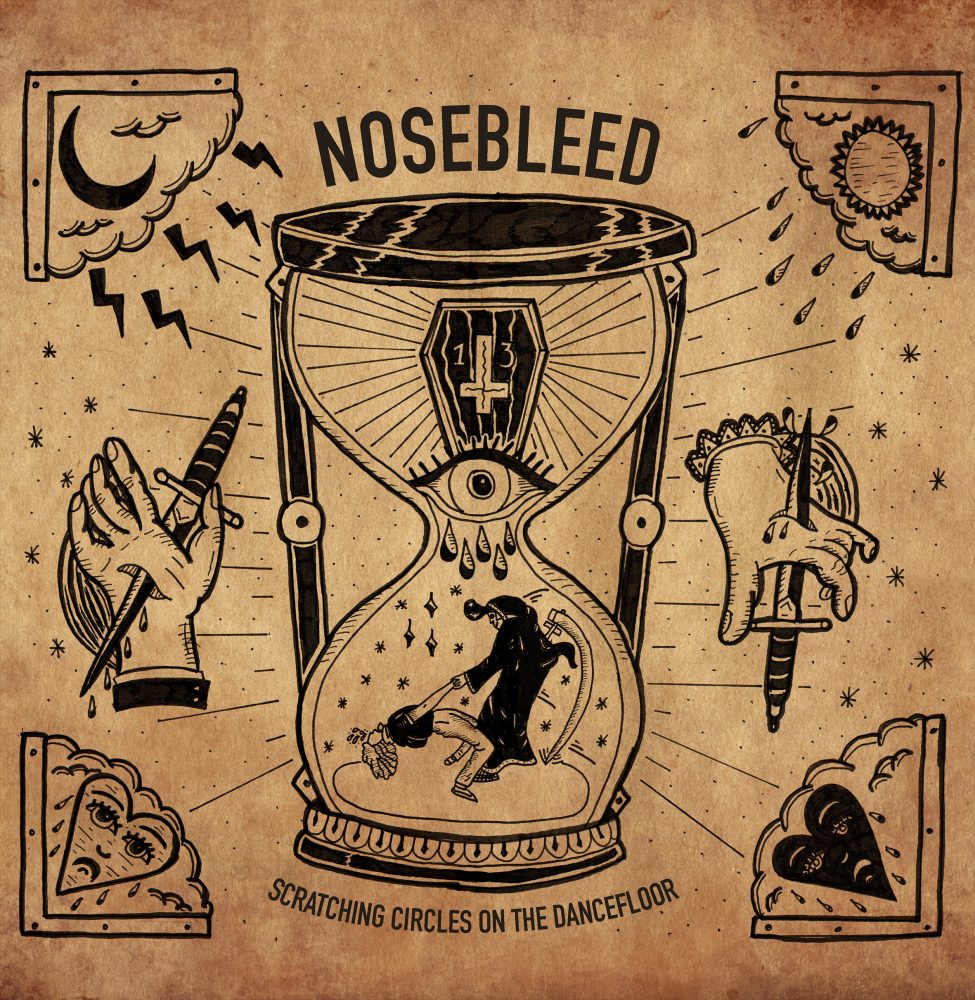 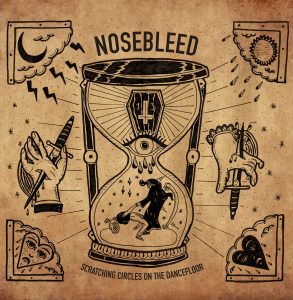 SCRATCHING CIRCLES ON THE DANCEFLOOR

Leeds trio Nosebleed rocket from the traps on their full-length debut and career through 13 slabs of riotous garage-punk in under 22 minutes. Louder Than War’s Nathan Whittle gets spun round and spat out by this fired up and frenzied album.

When a band drops on the live scene full of riled up energy, the question is always whether they will be able to translate it to the studio. After a couple of EPs that teased at such ability, Nosebleed have cracked the method on their debut album for TNS Records. It blasts in and out in just over twenty minutes, leaving you dosed up with high-adrenalin garage punk.

The band set their stall out right from the off with 55 seconds of yelped and spat lyrics over distorted and driven guitars. I’m Okay is done and gone in a flash but the scene has been set. I’m Shaking picks up the baton and races forth over a paranoid swirl of pounding rhythm and at times almost Lord Sutch-esque vocals. Finding time to throw in a ripping solo, it’s clear that the band are tearing and burning pages from Jay Reatard’s book. They know how to groove as well though. Time And Time Again takes a more typical garage-blues riffing idea and pummels it to the ground. Harmonies and screams blend together and fight for space before Wrong drags the band back to a more head-spinning moshpit-filling cracker of a song. When they drop back a touch off the riot, such as on the opening of Start Again you know that the respite will not last and quickly they’re back on their rollercoaster of rock ‘n’ roll. Everybody pulls all the best bits of the previous tracks together and is a highlight of the album. The song jutters along at breakneck speed with sputtering vocals and driving guitars. It’s glorious stuff to behold.

There’s absolutely no let-up though from the riot that Nosebleed send swirling around your head. Slow Down does absolutely nothing of such, although the (relatively) more spacious verse rhythm give you a chance to breathe, before the choruses kick up and throw you back into the pit. On songs like Scratching Circles there are shades of early Hives with the spikey groove on which it’s built, another influence that they push to the fore on rollicking Psycho. The heightened paranoia rises further on the fantastic I Can’t Tell You Anything, before the album closes off with the rumbling danger of What Have You Done.

On their debut album, Nosebleed have taken the two-minute blast blueprint and produced a storming album of floor-fillers. The brevity of the songs, and the album as a whole, keeps you on your feet and your head in their game. It’s a sprint from start to finish and leaves you only with the urge to flip it over and start again.

Listen to Scratching Circles below: