Home Music Bands Louder Than War Interview: Northside. Dermo from the band talks to us... 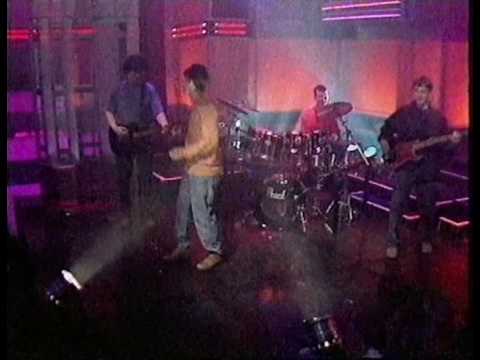 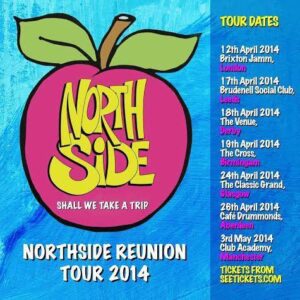 Louder Than War’s Carl Stanley recently caught up with Northside, the Manchester band who became famous for their gigs during the late 80s / early 90s Madchester Baggy scene, as they ready themselves to take to the road again.

Since last years announcement that Manchester favorites Northside were to reform for a much anticipated reunion tour the band have been busily locked into rehearsals going over Northside classics such as Rising Star, Moody Places, Take 5 and other Factory-Record releases which sound-tracked a magical era. And according to frontman Dermo they’ve never sounded better than they do right now – which is great news as the original line-up of Cliffy, Tim, Paul and Dermo count down the days to the first date on their upcoming UK tour which kicks off in the capital at Brixton Jamm on the 12th of April.

Louder Than War caught up with Dermo for a quick Q&A as he and his bandmates ready themselves to hit the road and take us all on a ‘trip’, once again…

Hi Dermo, thanks for talking to Louder Than War … as we edge closer to April 12th and Northside’s first reunion show on the upcoming UK tour, what’s the vibe like within the band, I guess your all excited, maybe a bit nervous perhaps?

Dermo: We are excited. It’ll be the first time that all four of us have played on the same stage together in London for 20 years. We’re really looking forward to it (and the rest of the tour) We’re all good mates and happy to be playing and making music together again. Straight up, it just seems natural for us to be doing this.

What was it like when Northside first played London back in the day and what are your thoughts about kicking the reunion tour off their?

We always seem to get a good reaction London. We played The Powerhaus, Town and Country, and a few other venues back in the day. Great gigs and atmosphere. They get us in the smoke, bring it on!

Then it’s on to Leeds, Derby, Birmingham, Glasgow, Blackburn (added date 25th April), Aberdeen before finishing up in your home town of Manchester on the 3rd May. It’s a great tour hitting some great musically inspired cities – for instance I know the band have always had a strong following in and around Leeds due to the shows you played in the early 90s with The Bridewell Taxi’s – are there any dates in particular that stand out?

They’re all top cities for us. Some of the best gigs we ever did were at Glasgow Barrowlands, Leeds Irish Centre, The Warehouse in Leeds (with the Bridewells) and Burberries in Birmingham. Buzzin for Aberdeen and Derby too. We just love playing live and interacting with the crowd. They feed off us and we feel the same.

Can you tell us how the rehearsals have been going? Even though its been some time since the original line up played together did you find that you all eased right back in as a band?

Rehearsals are going really well, like we’ve never been apart. I suppose this stems from us all still being friends and growing up in the same area, as well as us all being music heads in the same band. We’ve got that knowing nod, intuition thing, that makes it easy for us. We’re more than ready, never sounded better and can’t wait to get back out there again. 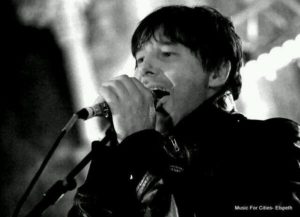 …and of course you’re all older, wiser and maybe even better players than you were back when you started the band? I know you’ve kept your hand in with special guest spots such as singing live with Jah Wobble and Keith Levene haven’t you? But what’s it like singing those Northside songs again?

Yeah, we’ve always been a tight band but now I think it’s fair to say we’re much more focused too. As for me personally, I’ve really worked on my vocals since we reformed and decided we were going to do this ‘Reunion Tour’.

The lads in the band have been really helpful to me with this, encouraging me to stretch my vocals and working with me. In the past I was more concerned about just creating an atmosphere on stage and wanting to be part of the crowd, almost more like a spectator of the band rather than actually being in it. Now, it’s the music first for me, although I will still defo be bouncing off the crowd.

to Yes, I’ve been invited and have done the odd guest vocal slot with Keith Levene, Bonehead, Jah Wobble and Hooky. Wobble invited me to sing ‘Public Image’ with him and Keith, what a buzz that was! A couple of years later I was invited to do it again, this time with Bonehead (Oasis) on guitar – pure magic! And at the end of last year (just before Northside reformed) I was invited to sing a song with Peter Hook and The Light at their Manchester Cathedral gig. I picked Ceremony and we did it together, it went down a storm, which was a big deal for me as it is one of my all time favourite songs, as is Public Image.

The set list – will we be getting all the Northside faves; Take 5, Tour de Force, Funky Monkey, Trip, Rising Star and the B-side classic ‘Moody Places’? Is it a set list like those from the ‘old days’ or have you tinkered with it a bit?

We will be doing all the old favourites and a few songs that we wrote that weren’t on Chicken Rhythms, songs that will reflect that era of the band. I don’t want to sound like I’m up my own arse but Moody wasn’t a B-side, it was a AA side and yeah it will defo be in the set list.

How about a future release of either unreleased tunes or maybe new material? Or is this reunion more about performing live again as apposed to releasing new material?

This tour is our Reunion Tour and that’s what it will be. Chicken Rhythms – The Factory Recordings from 1990-1991 will be reissued by Cherry Red in May and it will be available to buy on tour along with other official merchandise. After this tour we will be writing and recording new songs. They will be released as soon as they’re ready.

So what’s the best thing for you personally Dermo about being back with the band? It’s safe to say the story of Northside has had its ups and downs over its twenty odd year existence hasn’t it? For you personally and the band how does it feel to be doing it all again?

The time is right and it feels that way too. We can’t wait to get out there and smash the cobwebs in people’s minds. This isn’t just about a trip down memory lane, it’ll be an insight into what’s coming next for the band too. We’re gonna blow some minds!

There’s a lot of interest again for bands like Northside and, dare I say it, all the ‘Madchester’ groups, created from the return of the Roses most probably … what are you expecting at the gigs regarding the crowds? A real mix of the older fans and people who saw you first time around mixing it in with a younger / newer crowd?

Will we see Northside play more shows later in the year such as outdoor gigs or some of the festivals? Would you and the band fancy it?

Yeah, we’d defo be up for more shows later in the year and some festival dates in the summer. We’ll play, outdoors or indoors, we’re never closing doors and always opening doors. 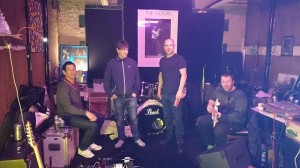 Though I realise it was a totally different era back when the band first come onto the scene, do you reckon you can rock that set list live like you all used too, just as funky and energetic as it was known and loved for?

We are ready! Watch it happen. Pure, controlled energy with us musically at our best. Don’t think, feeeeeel … Yeah Man!