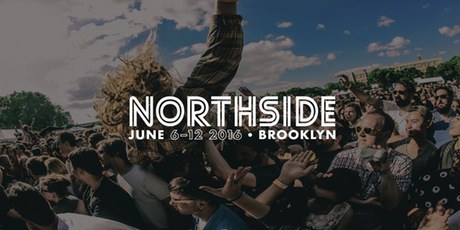 The annual summer showcase of rising talent from both locally grown Brooklyn bands and aspiring national acts will once again be crammed into 400 performances over 4 days. Louder Than War’s New York correspondent shares her recommendations.

The Northside schedule can certainly seem daunting, and that next great life-altering discovery could easily be missed, so I’ve broken things down a little into a personal itinerary of top picks.

On Thursday June 9th, the haunting avant-rock skree of Video Daughters kicks things off at Aviv at 7:30 PM.

Later at 9 PM, AdHoc is presenting a gritty punk show at Palisades with Arabic-language hardcore outfit Haram, the noisy dissonance of Nandas, NYC natives Cheena (a proto-punk style supergroup of sorts comprised of members from local underground favorites Hank Wood & The Hammerheads, L.O.T.I.O.N., Crazy Spirit and Dawn of Humans), and the sardonic austerity of Austin’s Institute. The combined forces of the bands on the bill are sure to represent the full spectrum of raw punk currently operating in the city.

You could also visit Baby’s All Right during vampire hours for some highly personal punk minimalism. Tipped ‘band to watch’ Diet Cig opens the show with some sweet nonchalant pop and pleas for realness, supported by the spunky Childbirth, mocking the vacuous rituals of the modern digital age (members of Chastity Belt, Tacocat and Pony Time). The DIY Ramones-core cool of Colleen Green closes things out at 1:15 AM.

However, the Monofonus Press showcase at Union Pool starts at 7 and is my runaway favorite lineup of the Festival, featuring Brooklyn’s Beech Creeps, the loud, captivating menace of Castle Face Chicagoans Running (will drummer Alejandro Morales bring an air horn this time?) and the spooky spiraling drone of Austin’s Spray Paint.

On Saturday afternoon, the obvious choice is once again Union Pool for the Unblinking Ear Records showcase with Jason Henn’s Honey Radar (who has been home recording GBV style since 2005), local jangle rock heroes Big Quiet, and ex-Obits post-punk dads SAVAK, as well as an unannounced special guest.

At 10 PM, King Khan does his super fun James Brown impersonation as King Khan and The Shrines at Brooklyn Bowl, and hooligans with hearts The Gotobeds headline the late show at The Knitting Factory at 1:15 AM.

Some events are sold out already so badge holders are advised to check the listings and arrive early to avoid disappointment as it’s first come, first served. Full Northside schedule available here.