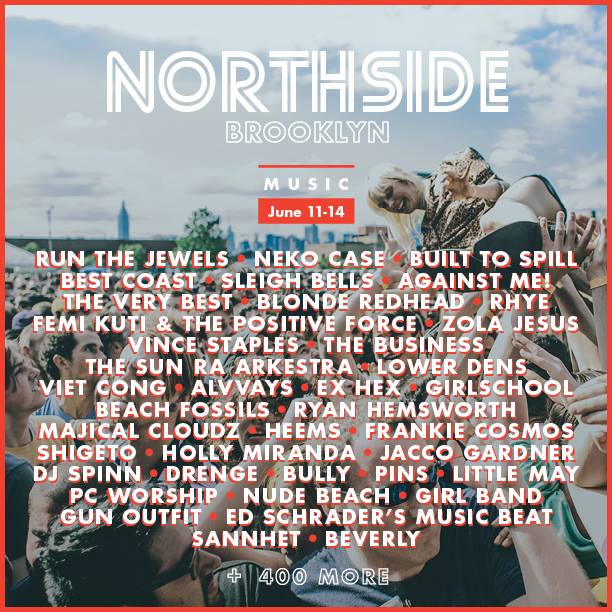 While Northside is hyped as an ‘all eyes on Brooklyn’ moment, the badge holder goodie bag this year was like someone raided a Scandinavian travel agency in a random bid to drum up some Nordic tourism (I got a map of Finland, an Oslo city survey and a brochure reminding me to say ‘tack!’ in Sweden in case my New York manners failed me during a visit one day). 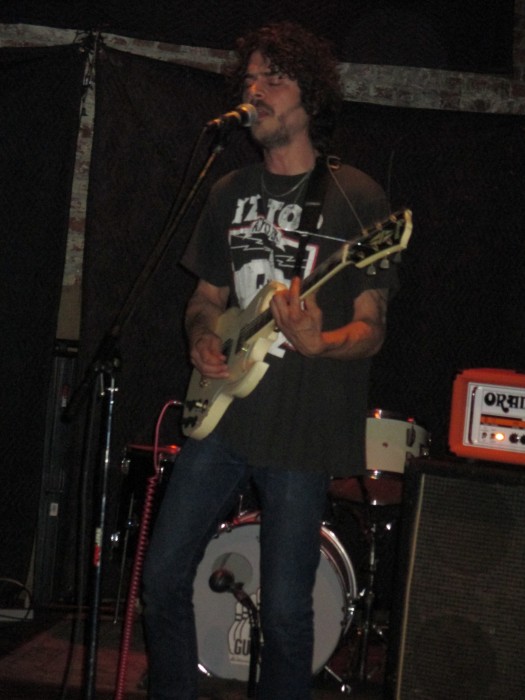 From festival headquarters and badge pickup spot at McCarren Park, newly armed with some essential Swedish phrases (including asking how to get to the bathroom, potentially very useful…), I began my Northside journey last Thursday at The Gutter, a new bar on N 14th St with a back bowling alley that also hosts live music performances.

First up was Justin Holm of IYEZ, bathing the dark room in reverb saturated soundscapes and some abrasive white noise textures, followed by super serious 4 piece Whitewash, who describe themselves as “post-post-post-post-art”, whatever that is. They trade vocal duties but it’s mostly drummer Evan Glazman singing the surprisingly developed songs, although their stage charisma needs a little work because a few times I felt my mind drift from my bar stool observation point at the side of the room. 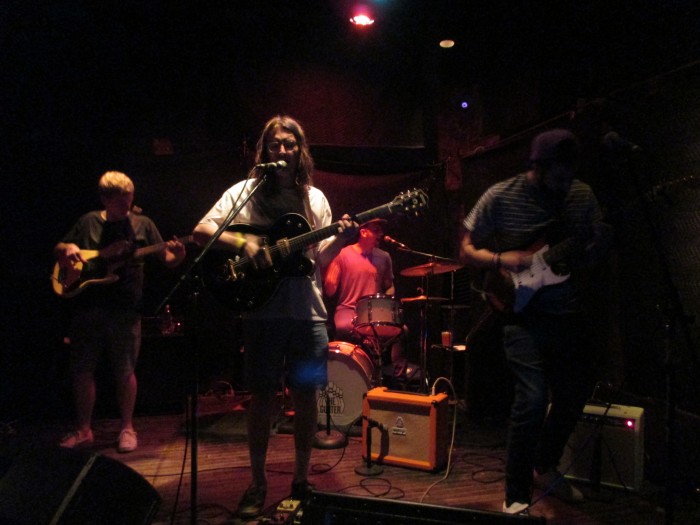 Next was Ludlow Ejacula, an act with far more resonance and substance than the willfully self-indulgent experimental trappings of the previous artists that played. Singer Emily H. Brout (formerly of The Indecent) performs with her arms locked behind her back, Cooper’s dream style. Maddy’s upfront chunky bass sound, Emily’s haunting trill, and guitarist Bryan Thornton’s chord progressions seemed instinctive, and there was an intimate dynamic to the music with real weight behind it that I was grateful for. 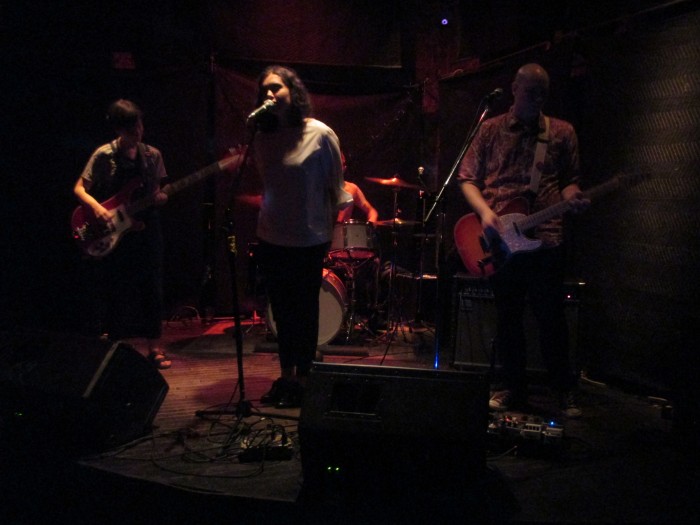 Noisy shredders Sharkmuffin finished off my stint at The Gutter. Tarra Thiessen and Natalie Kirch are certainly busy creating a buzz for themselves, and keeping some pretty great company while doing so (I saw them twice last week on bills with Goner trash punk alumni The Hussy and Digital Leather).

From there I headed to Saint Vitus Bar for South London Oi! Legends The Business, who had just the right balance of energy and working class wit to perk me up a bit, even after losing an entire beer to the floor during a blissful drunk woman’s overenthusiastic crowd rush. The band’s classic singalong anthems like “Loud, Proud and Punk”, “Mortgage Mentality”, “Suburban Rebels”, and “Welcome To The Real World” remain fist-pumpingly catchy, feel good fun, while the three newer additions to their canon prove they don’t have to rely solely on past glories to entertain fans, either. 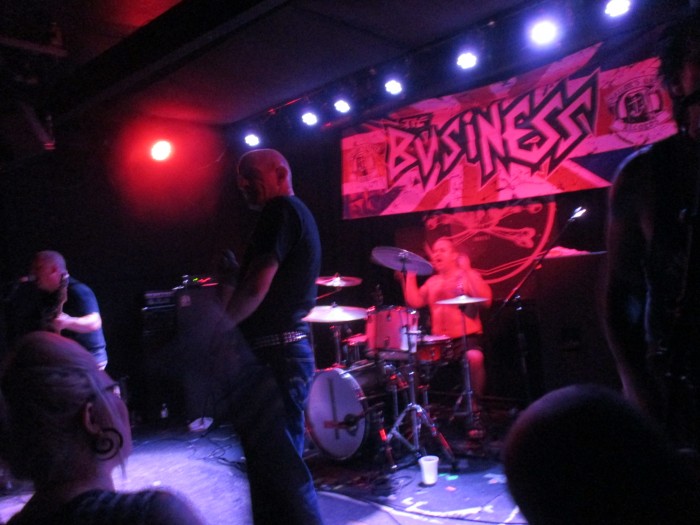 On Friday, I trekked to Greenpoint DIY sweatbox Aviv, and was glad I ran into Josh Intrator of Sleepies so he could direct me towards the white, unmarked door I had already walked by twice with a knotted brow fixed resolutely on one of my crudely drawn maps. Since everything was running behind schedule, and because it was so steamy in there I thought the whole place would be leveled to the ground if anyone lit a match, I only got to see 3 bands play this impressive Exploding In Sound/Ipsum/Gimme Tinnitus showcase. Easthampton, MA’s Kindling created a hypnotic dirge with an undercurrent of sweetness courtesy of Gretchen Williams’ murmured vocals that was sometimes reminiscent of Loveless-era MBV. 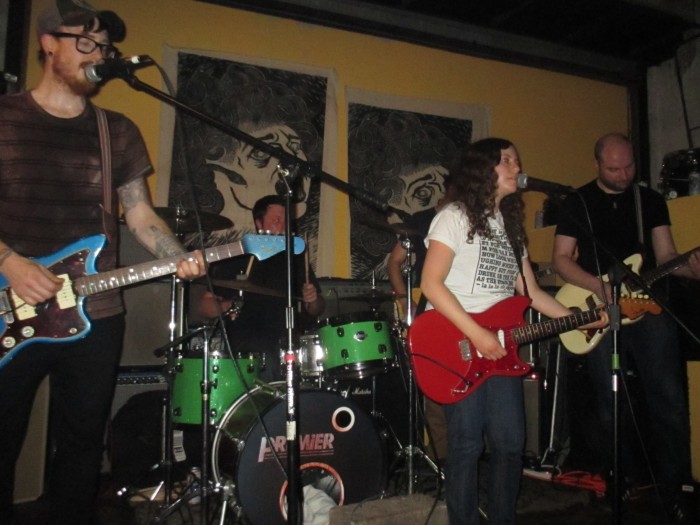 Carl Shane from Boston-based Kal Marks sings like Kermit the Frog, if Kermit the frog swapped “Bein’ Green” for more direct, grown-up themes of human suffering, loneliness, and lotion in one’s lap. Just about every title in their current repertoire reads like a headline from a frustrated teenage diary (“Just a Lonely Fart”, “Life Is Murder”), but their inner turmoil feels genuine and relatable and it rocked.

Long Island duo Washer is Mike Quigley on guitar and vocals and Kieran McShane on drums, and they were the last band I stuck around for. They play wiry, bare bones punk rock that is forceful and brief yet also sincere and thoughtful. 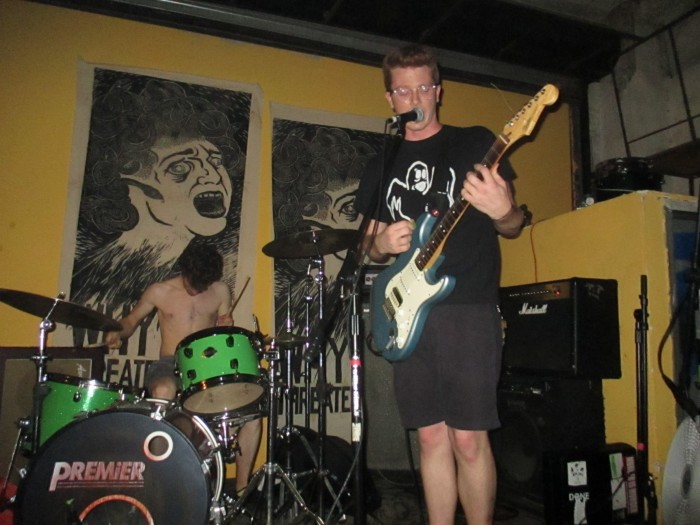 On Saturday, my late start had an unfortunate domino effect which meant that despite going back and forth between 3 different venues, I only actually caught Built To Spill and Best Coast at the outdoor 6,000 capacity 50 Kent that evening. Built To Spill are known for their screeching, protracted jam band epics and radio-friendly riff rockers as well as their poppy and pretty indie songs, and they played a very solid, fan-pleasing set (“You Were Right”, “Dystopian Dream Girl”, “Else”). Doug Martsch’s killer six string guitar onslaughts make him a direct descendant of Neil Young’s over the top whammy bar freak-outs, but it’s the range of styles that makes BTS so compelling. 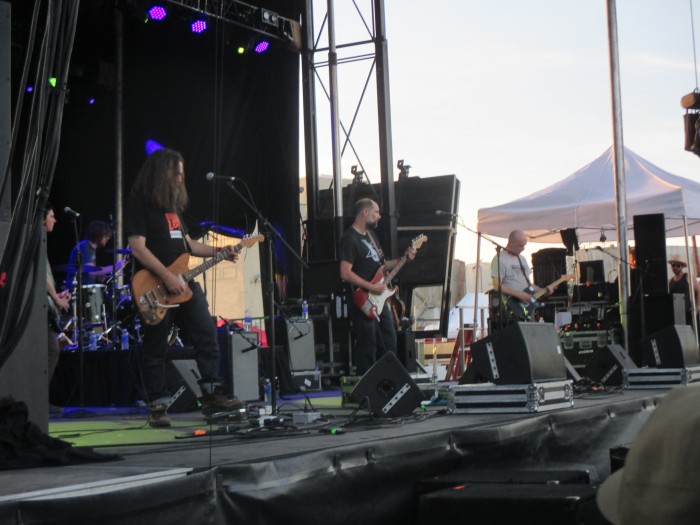 Unfortunately the bright and breezy Best Coast had fallen out of favor with me not long after their debut album Crazy For You, an album so charming I was easily able to overlook the sloppy reoccurrence of inane ‘crazy’/’lazy’ lyrical rhyming schemes for, but I was glad to finally see some of that sun-kissed romanticism in action on stage. 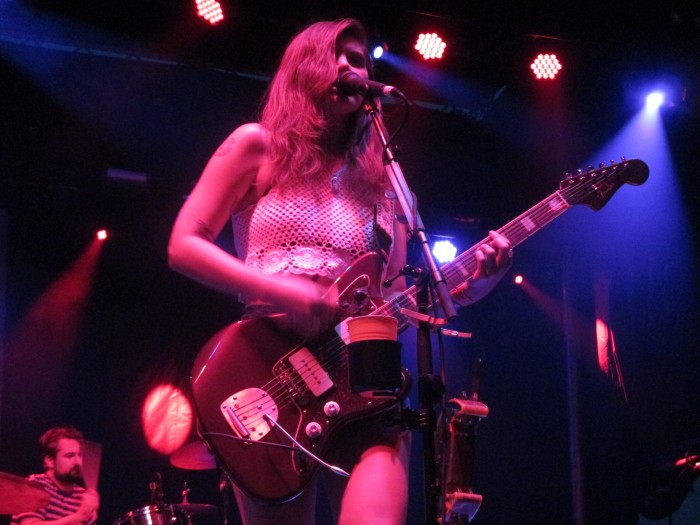 By Sunday I was pretty burned out so only went to the sold out Music Hall of Williamsburg show with Viet Cong, Sannhet, and Girl Band. Dublin’s erroneously named Girl Band was like a sexier Big Ups. Frontman Dara Kiely clawed at his ironic (?) Backstreet Boys t-shirt in a tense, venomous rage throughout the set, while Alan Duggan routinely slid a beer bottle along the neck of his guitar for increased chaos. I like violence and lawlessness in my music a lot of the time, and Girl Band was an exciting warm-up act for headliners Viet Cong and a raw new talent to watch. 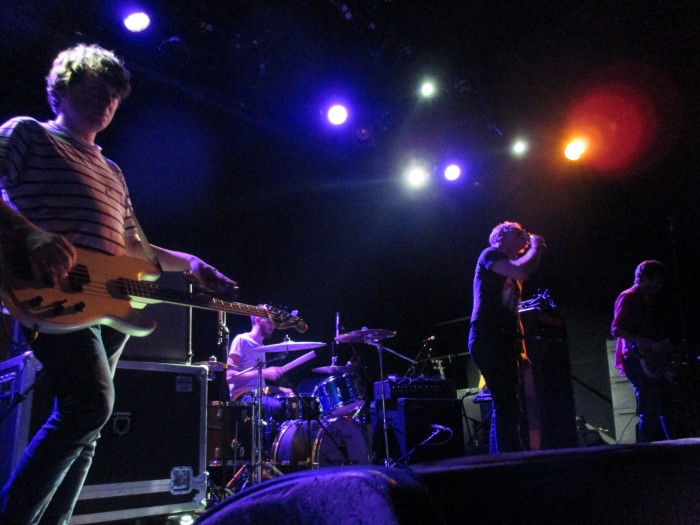 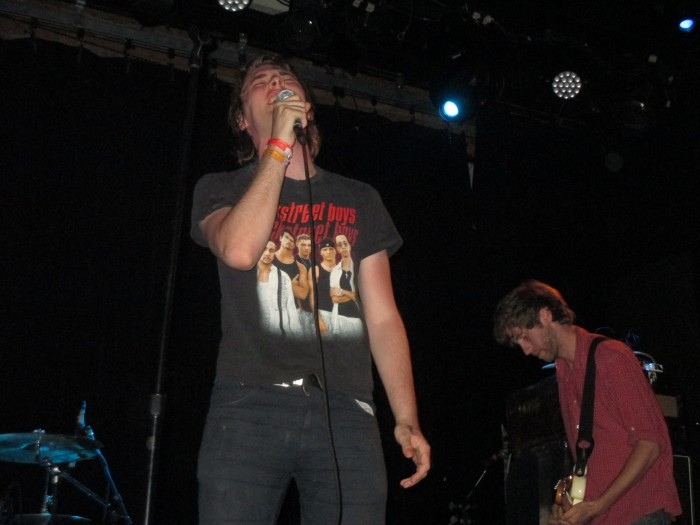 Sannhet is a trio who produce an unrelenting instrumental drone against epilepsy inducing projector visuals, and they were so loud they made ripples appear in the cup of beer I held in my hands. 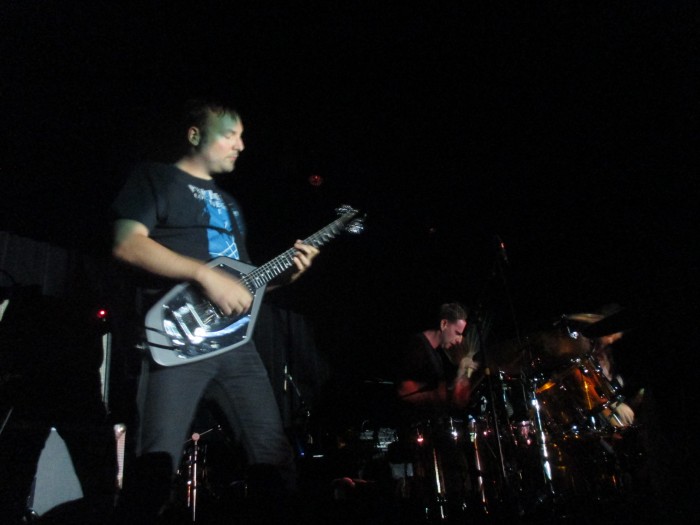 Calgary’s art rock clowns Viet Cong arrived onstage with some typical good-natured goofiness; Matt Flegel played the “Billie Jean” bassline and asked for some classic rock song requests. He later humorously informed us that keyboardist/guitarist Scott ‘Monty’ Munro was feeling rough because he was roofied the night before (“You don’t need to roofie him, just ask him”). Despite the band playing well, the MHOW’s disappointing sound meant some of the more subtle guitar intricacies were inaudible, and I just mentally filled them in through already being familiar with the songs. Viet Cong has a master grasp of the build up and lift off approach, and each number seems to switch off and break into complex mini movements. The discordant bursts and almost maddening litany of noise in the grandiose chasm of “Death” belies a very precise harmonic development that makes Viet Cong one of the finest bands around, so it’s a real shame MHOW let them down a little. 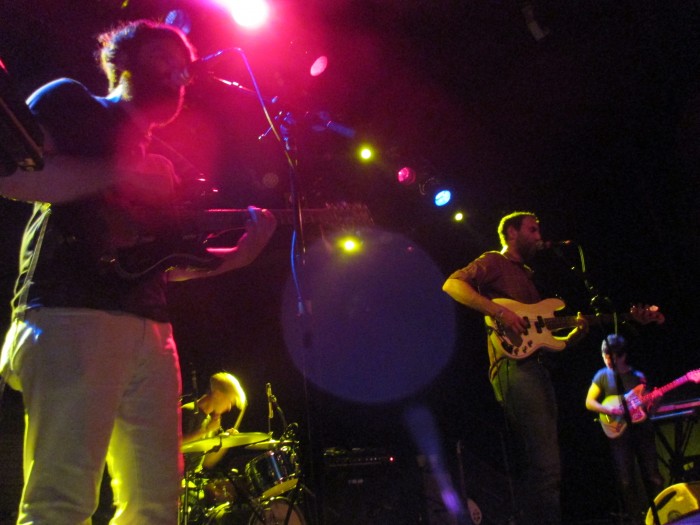 All in all, Northside 2015 was a successful spotlight on rising stars as well as unheard local bands. Ultimately, however, it will take a lot more than a few shows in grimy DIY warehouses for any artists wanting to get noticed, and I feel that some of the smaller shows were overshadowed by the bigger names playing (Against Me!, Best Coast, Run The Jewels, Sleigh Bells), but we’re all used to that, this is New York, after all. Tack och god natt! Oh, but before I go, var ligger toaletten?

~
All words and photos by Carrie Quartly, you can read more of her writing on the site here.