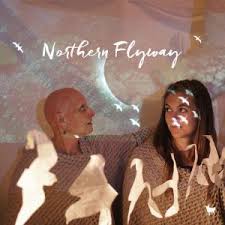 Jenny Sturgeon and Inge Thomson go off the beaten track for an atmospheric flight of fancy.

Oh yes, cue all the bird analogies and puns as  we dissect an album that takes inspiration from the feathered friends, the mythological carriers of souls, messengers to the gods and as Guy Garvey once pointed out, the keepers of our secrets.

Initially, Northern Flyway focussed on an audio visual production that celebrated the ecology, the folklore, the symbolism and the mythology of birds and birdsong, although what we’re looking at is the soundtrack – a CD of songs recorded in Shetland in February 2018.

Birdsong expert Magnus Robb (John…any relation?)and with Sturgeon’s bird biologist background and thomson’s home of Shetland, the combination is complete.  Add the skills of multi-instrumentalist Sarah Hayes and beatboxer/’vocal sculptor’ Jason Singh and the highly specialised  ingredients are in place. Oh and a whole load of birdsong as instead of listing the names of obscure wooden and long forgotten instrument, we can list the white fronted goose, the dotterel and the siskin. No surprise that the the duo elevate the bird content to the status of fifth member of the band.

Musically, the set proves atypically light and airy gathering, the vocal often reminiscent of the breathy Unthanks flavour with a similar restraint in the musical accompaniment which is a pretty fair compliment.

The commentaries and soundbites occasionally sound a little Creature Comforts yet they show a keenness to experiment and branch out where the Lady Maisery-ish harmonies flit in and out, dodging, dipping, ducking and diving, dodgeball style, between  the strange collection of noises during  Lost Lapwing.

Adapted from Tennyson’s poem, The Eagle is a more ominous piece whilst the mythology of the lapwing (carriers of the souls of unborn children and betrayers of Christ) and Odin’s ravens (Huginn and Muninn) are also called upon on an album that provides a diversion from the usual turbulent world of political machinations and social media frenzy we inhabit and a contrast to the man made barriers and borders we create as the freedom of bird flight is celebrated.  An interesting combination of music and the natural world.

Here’s a taste of Curlews from the album: