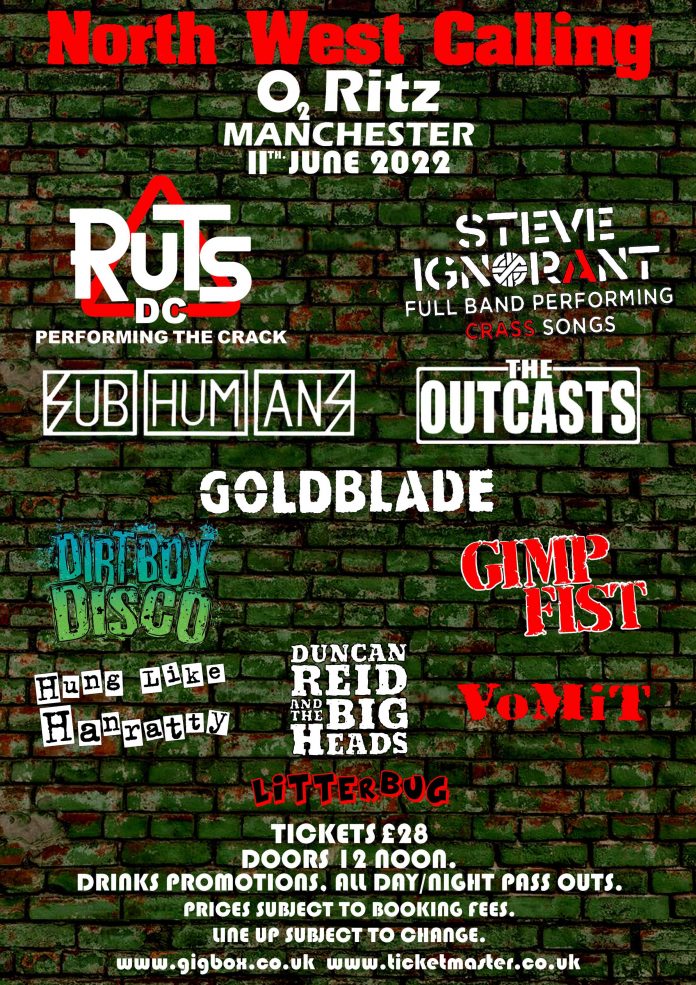 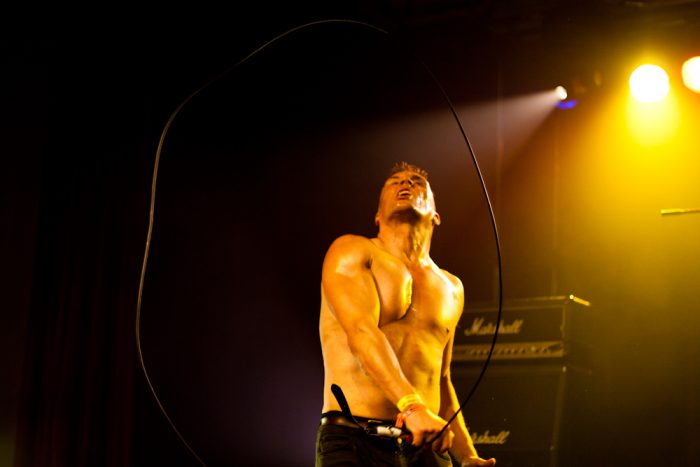 The North West Calling Festival makes its post-Covid lockdown return exactly a month today at its familiar home of The Ritz, Manchester.

The one-day Calling Festivals are always very popular events, with most locations selling out ahead of the doors opening. The North West line-up for 2022 is very attractive and with Louder Than War being an official Ticket Outlet we have seen strong sales, on top of those tickets that rolled over from the postponed 2020 & 2021 events.

Ruts DC are topping the bill, Segs will be leading the boys through a full performance of the band’s seminal album The Crack – those of you who saw this tour back in early 2019 will be aware of just how potent Ruts DC are right now. Having run through The Crack, the audience were then treated to a selection of material from the band’s entire catalogue from H-Eyes right up to tracks from the Music Must Destroy album. Within the last 6mths Ruts DC have confirmed they are writing and recording new material; will North West Calling be the place they chose to present a few songs to a live audience?

Steve Ignorant has only just concluded a full UK tour performing Crass songs. I was fortunate enough to catch the date at Manchester Academy in early April; backed by his band comprising members of Slice Of Life they delivered a true powerhouse set, all the energy and ferocity of a Crass gig, but musically this hit much harder than anything the original band could muster.

Subhuamns have just announced an extensive US tour in July, returning to the UK just in time for an appearance at the Rebellion Festival 2022; ahead of this they have a few select UK festival dates including both North West and North East Calling.

Similarly, Northern Ireland’s finest, The Outcasts are confirmed for both the North West And North East Calling events, which take place in the midst of their UK and European dates.

Goldblade will be turning the event into a hometown gig; which (sadly) will be the band’s only live date this year- I think it’s fair to say that John Robb will undoubtedly spend most of the gig on the crowd barriers, leaving Pete G.O.R.G.O.U.S, Skullknuckles, and Brother Keef (one of the tightest rhythm sections of any band around) to keep things moving; be ready for both “fighting in the dancehall… and fucking in the streets!!”

Dirt Box Disco are not shy of a party, and having just released their new album TV Sex Show, we know this one is going to be a “Dirt Box Day” – be ready for the assault on the crowd barriers, as we all get “fuckin Wasted!”

Gimp Fist have rightly carved out their own niche in the street punk world, and having only just announced the forthcoming album Isolation, you can expect to see their profile raised further still.

Hung Like Hanratty, Duncan Reid & The Big Heads, and Vomit are also confirmed whilst Blackpool’s Litterbug open up proceedings.

Doors open at 12 noon, drinks promotions are available whilst all day/night pass outs are possible.

The Ritz is approximately 300yrs from Oxford Road rail station and is also easily accessed via local bus routes. For people travelling via car, local parking is available, though advance booking is advised.

As mentioned, Louder Than War is an official Calling ticket outlet; please be aware we have just 10 tickets left available from our quota for the festival – tickets are in stock and will be posted out with 48hrs.

Tickets are available from:

Louder Than War, Gigbox, The Ritz 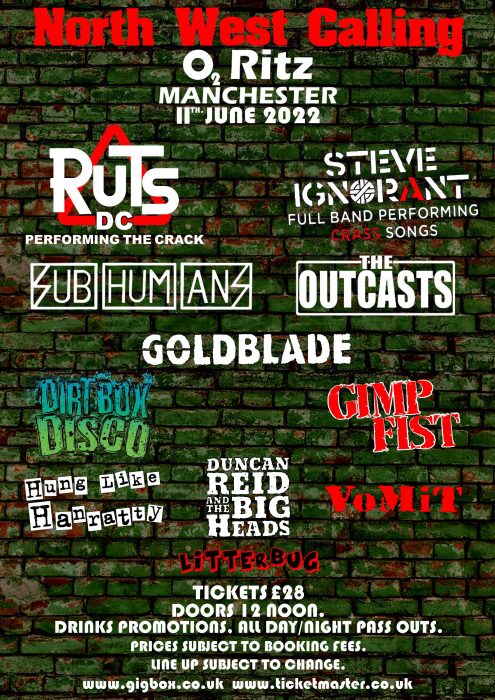