Home Music Bands North By Northwich – The Charlatans/The Blinders and much more : Live... 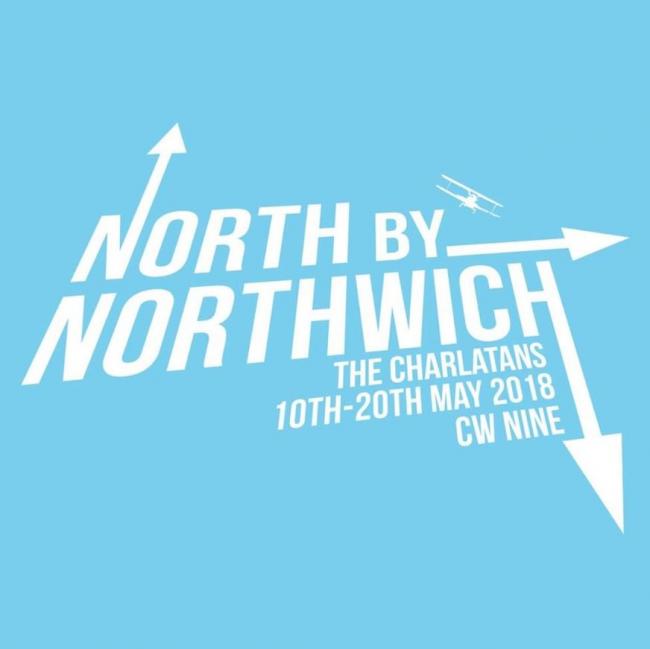 I never expected to be writing a music review involving my adopted hometown. I never expected The Charlatans to do a four night residency at Northwich Memorial Hall. I never expected 20 plus degrees heat all week. But is has happened. I’ve seen a difference and felt a buzz about this town for the first time in the eight years of residing here.

I walk down Barons Quay to take a look at the Charlatans exhibition which is facing the cinema and the Liverpool Sound City event talking place and bump into the gaffer himself John Robb chatting to anyone who approaches him. He’s just done a few talks at workshops helping young musicians in areas like getting on the festival circuit and advice and his expert knowledge on all things music and beyond. My missus buys him a brew, has a chat and we leave him to his usual busy schedule. All this going on with live music from the likes of Red Rum Club and The Zangwills who I sadly missed due to all sorts going on. 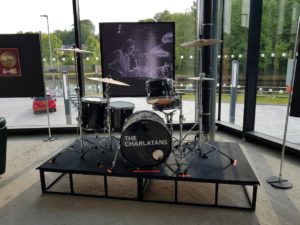 I visit the exhibition and it’s really well done. Lots of memorabilia including gold discs, items of clothing worn by the band, storage gear, two drumkits, and lots of press shots and archives from the music press.  It’s a must see exhibition for any big Charlatans fan and there is loads of stuff to buy. There are even back stage laminates hanging from the wall. I wouldn’t be surprised if anything got nicked! My favourite things in there were the loungers and the North Country Boy deckchair (which my missus bought me as an early birthday present, although not really for sale….). Very unique, especially the lounger with all the song titles emblazoned in a colourful array. A nice touch to this mini festival (more photos below). I then make my way down to The Salty Dog for a bit of BMX Bandits followed by The Charlatans over the road (review here: https://louderthanwar.com/the-charlatans-and-bmx-bandits-north-by-northwich-18th-may-live-review/). 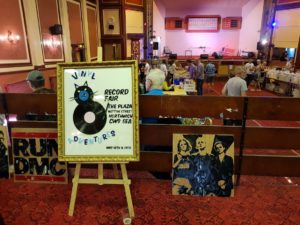 Saturday and I’m dropped off in town, left to my own devices due to a certain event being on and needing to investigate the record fair. Seen that picture of The Blinders on the right? That was made by Kirk Whitehouse, the Brummie innovative artist who I last met at the Cabbage art exhibition earlier this year. He makes cracking (he he) artwork from old vinyl by smashing it up with his trusty hammer and creates something beautiful by piecing together the fragments. Check out his website: https://smashedhits.co.uk/ 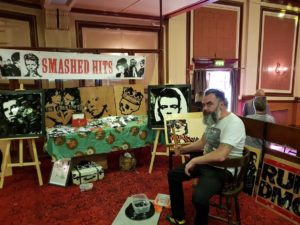 The record fair itself had a great selection of vinyl on numerous stands and Tim Burgess himself was kindly signing vinyl for fans and generally chatting to everyone who approached. I had a bottle of CW9 ale which went down well and was drawn to a selection of Fall albums which had my palms itching. All this was set in Plaza building which is said to be haunted. Nothing spooky going on here except for the guy wailing on stage who needed turning down…

I’m at a bit of a loss now as Slow Readers Club aren’t on until 8.15pm and I don’t wanna get pissed so I wander around and bump into my cousin Colin who’s driven from Wigan to get some decent vinyl (he buys Melting Pot by The Charlatans which is signed by Tim) and he happens to have a spare ticket for the Sleaford Mods documentary Bunch Of Kunst. Winner! As documentaries goes it is powerful stuff and shows the rise and the shittiness that Jason and Andrew had to go through to get where they are now. They are probably the most important band around at the moment and show through pure grit you can make it in the music business without sucking up to the majors. Just determination and belief in what you do. Fucking powerful shit! Check out the website: https://www.bunchofkunst.com/ 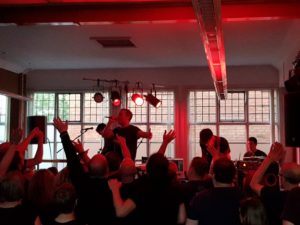 Next up is Northwich library for The Slow Readers Club which I’ve been looking forward to a lot this week due to their successful third album (review here: https://louderthanwar.com/slow-readers-club-build-tower/) I walk into the tiny library to a young guy from Durham on stage who has been recommended to me Tom ‘Mouse’ Smith. He’s fuckin 14 years old but sounds like he’s been playing acoustic guitar since he was four. And that voice… I don’t know the titles of the songs he’s playing but I don’t care. He’s damn good. I did know the Animal’s cover House Of The Rising Sun though and it’s perfectly delivered. The new Jake Bugg anyone? He’s already supported James and The Charlatans so you get the gist!

Slow Readers have been building up quite a following during their existence and this shows by the number of t-shirts wearers seen walking around Northwich today. I’m a bit of a latecomer but can see why they have rose to the status they are in now. They start as usual I’m told with the album opener Lunatic and Aaron certainly has been honing his live skills since the Omerta days. The place is bouncing and I feel like the floor is gonna give it’s bouncing that much. The audience know all the lyrics and they do a fine set including tracks from the new album, and throwing in some stuff from their first two albums. A great live band with a hardcore following which will surely keep growing. To play a library when they can sell out Manchester’s Albert Hall is an honour for the Northwich people and I thank them for doing it.

On Sunday I chill out for a bit after picking up my deck chair from the exhibition and sit in the sun for a bit factor 30’d up cos it’s fuckin boilin’ I get back down to The Salty Dog for the finale gig of the festival The Blinders. 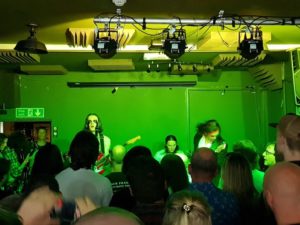 These guys will never be seen in a venue like this again any time soon. Last night they played The Ritz and apparently gave Cabbage a run for their money! This is only a short set but they amaze everyone here with how loud and energetic they are. Thomas comes on all bare chested and face painted up like a staring shaman and powers through an excellent Gotta Get Through This with Charlie looking like a young Nick Cave and Matt pounding the drums. L’Etat C’est Moi is another explosion of sound as is the brilliant Ramona Flowers and most of this stunning set. The Deja Vega guys are stood in front of me and are taking notes for when they make their leap. But after their stormer of a set on Monday night they might not need it!!

Northwich has been treated to some great music over this whole event and I apologise to any of the bands I didn’t get to see due to being only human and having a normal life. There are rumours this could be a yearly event. I surely hope it is as I’ve never seen a small town being so revitalised by the power of music. 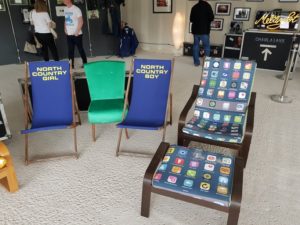 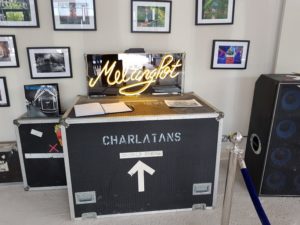 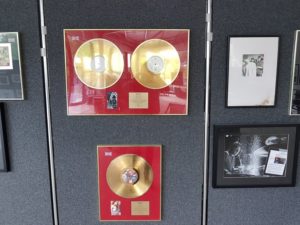 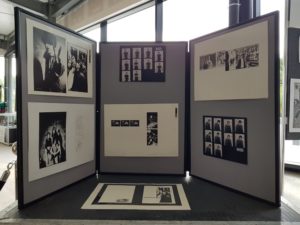 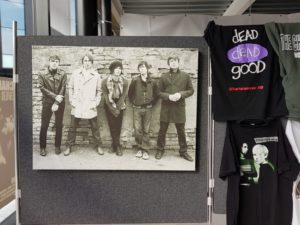