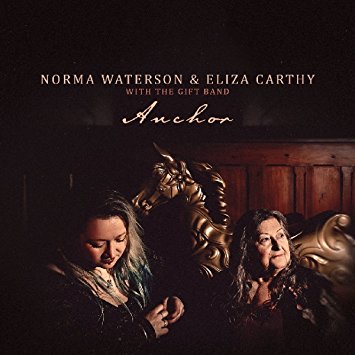 We could harp on and rehash the oft quoted “two of the finest exponents of traditional song” but it would feel  a bit same old; a bit blah blah blah, so suffice to raise the question of  could  be a more potent pairing in folk music?

Of course, mother and daughter, Norma and Eliza have been inseparable over the years with the family bond of the Waterson:Carthy partnership, yet with the long overdue collaboration on 2010’s Gift and now Anchor, the musical relationship becomes finely tuned.

Never short of taking off on a musical adventure or two, Eliza returns home to join Norma on a choice blend of  eleven contemporary songs (from the works of Tom Wait, Nick Lowe and KT Tunstall) along with the obligatory  traditional songs that remain their stock in trade. All of which bear the common thread of recalling influences and old friends of the extended Waterson/Carthy family that range from New Mexican friends Bayou Seco and the Irish traditional singer Margaret Barry to legendary American ballad singer Helen Schneyer. As usual, it’s more than just a set of songs but  a lesson in folk culture and history.

Then there’s the legendary MacColl/Seeger family themselves who are represented by The Elfin Night, a song collected by Ewan and Peggy in the 1950s. The whole essence of being rooted in love and family whatever may occur, strengthens the bond of what this family has always been about.

Needless to say, there’s a peerless empathy about Anchor – an apt title that provides a strength in its solidity and reliability. Norma opens proceedings with Tom Waits’ Strange Weather, one  that takes on an even more world weary view than Waits himself could induce if that’s possible amidst a late night Gallic hint before The Elfin Knight takes up the flag flown proudly and boldly by Eliza’s Wayward Band in an arrangement built for a bigger sound – dramatic and wayward itself, rolling and tumbling round the familiar words. A more relaxed and refined arrangement accompanies  Nick Lowe’s The Beast In Me, the variety continuing as Ladies and gentlemen, Eliza Carthy presents the music hall splendour of the Galaxy Song, jaunty whistling interlude included . One wonders of the song was chosen just to sing the final line “pray that there’s intelligent life out in space ‘cause there’s bugger all down here on earth (“just ask me mother…”).

A haunting and ambient verison of KT Tunstall’s Shanty of the Whale, a Waterson inspired track , also features guest vocals of Martin Carthy, who also hauls out Scarborough Fair for another outing – after all, he has a vested interest…and in trying our hardest to pick out significant moments on an album which rides a series of peaks, the pairing of Lost in the Stars (a wonderful take on the Kurt Weill classic) and the grand tour de force Nelly Was A Lady are hard to top – until you discover another golden moment…

Majestic and dignified, passionate and moving, Anchor is packed with treasures, even Twinkle Twinkle Little Star and it’s simple Dylan-y-ish harp break and another example of the communal ‘all join in’ vibe is a gem and for once, take the recommendation to get onto Spotify as soon as possible  for the extra bonus of Norma on the front porch in the backwaters of America  doing The Wild Colonial Boy and an uplifting  sailor’s hymn We Have An Anchor straight from the chapel.

As a footnote, keeping things in the family. Eliza and Martin Carthy have a live album coming out recorded at Hailsham Pavilion during a recent bout of touring in February 2018 for which a goodie packed pledge campaign is running. In the meantime, simply drop anchor and wallow in a glorious Norma and Eliza led belter.

Listen to The Elfin Knight here: