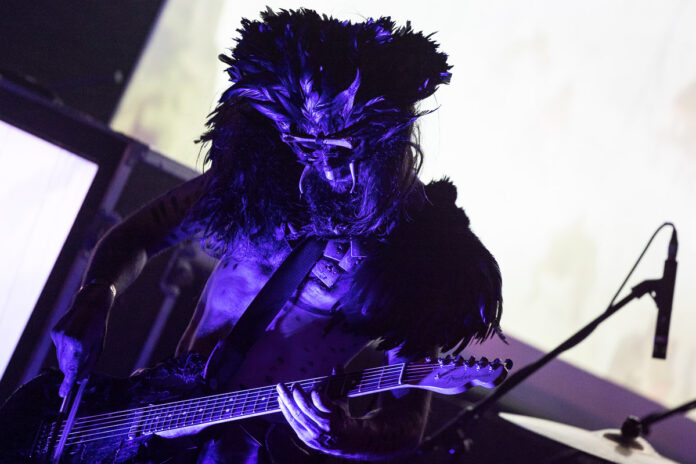 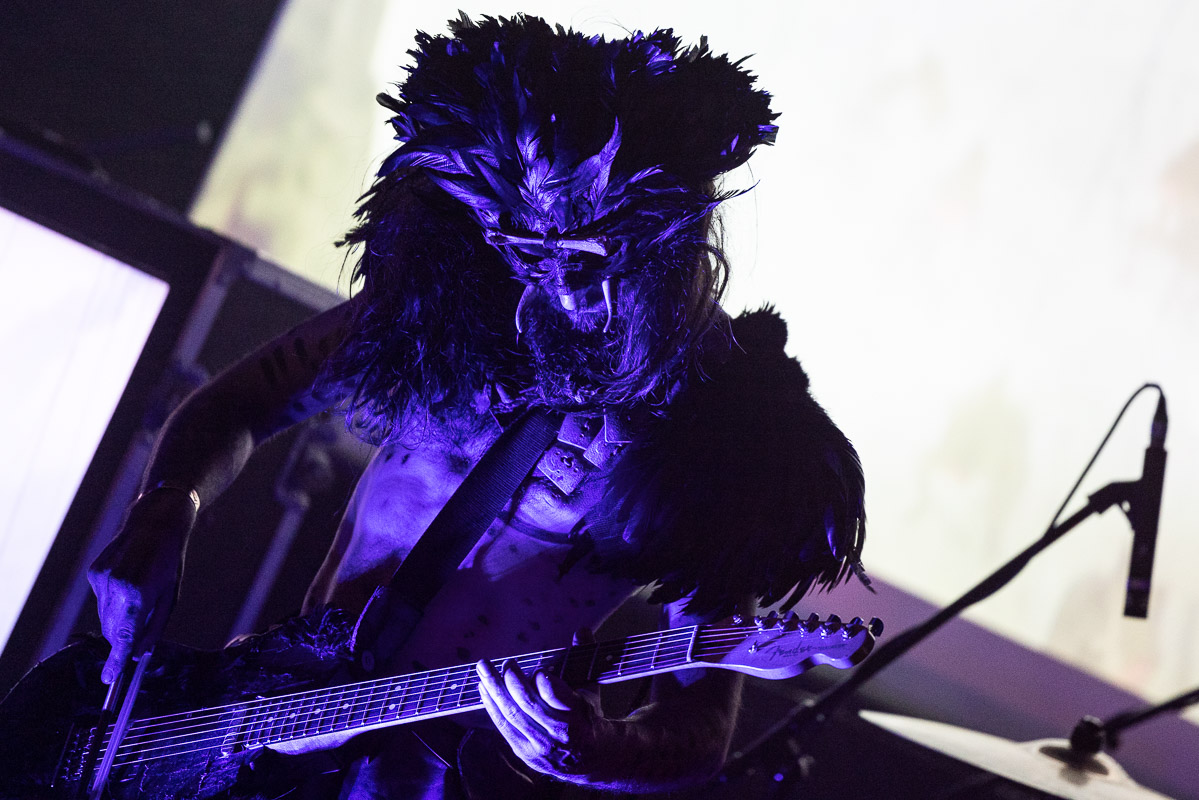 Andy Brown heads down to The Brudenell Social Club to catch an audio-visual performance by post-rock goliaths, Nordic Giants. He shares his thoughts for Louder Than War.

It feels apt that the sky is full of stars as I head down to the Brudenell Social Club to catch Nordic Giants. An appropriately awe-inspiring image to prepare me for the duo’s star-gazing, post-rock spectacle. The duo are known for combining their music with immersive live projections. Tonight promises to be a real treat for the senses. If all this wasn’t exciting enough, the band are touring the UK alongside Norwegian rock messiahs, Årabrot.

Named after a garbage dump in Norway, Årabrot have created something of a cult following since their inception in 2001. Helmed by Kjetil Nernes and Karin Park, the married couple live in a church in Sweden and worship at the altar of rock ‘n’ roll. Dressed like they’ve beamed in from the early 20th century, the band has a tremendous stage presence from the moment they arrive. Nernes and Park are dressed almost entirely in white; the latter rocking out in his trademark, oversized Stetson. The drummer is a tad more casual in his baseball cap. 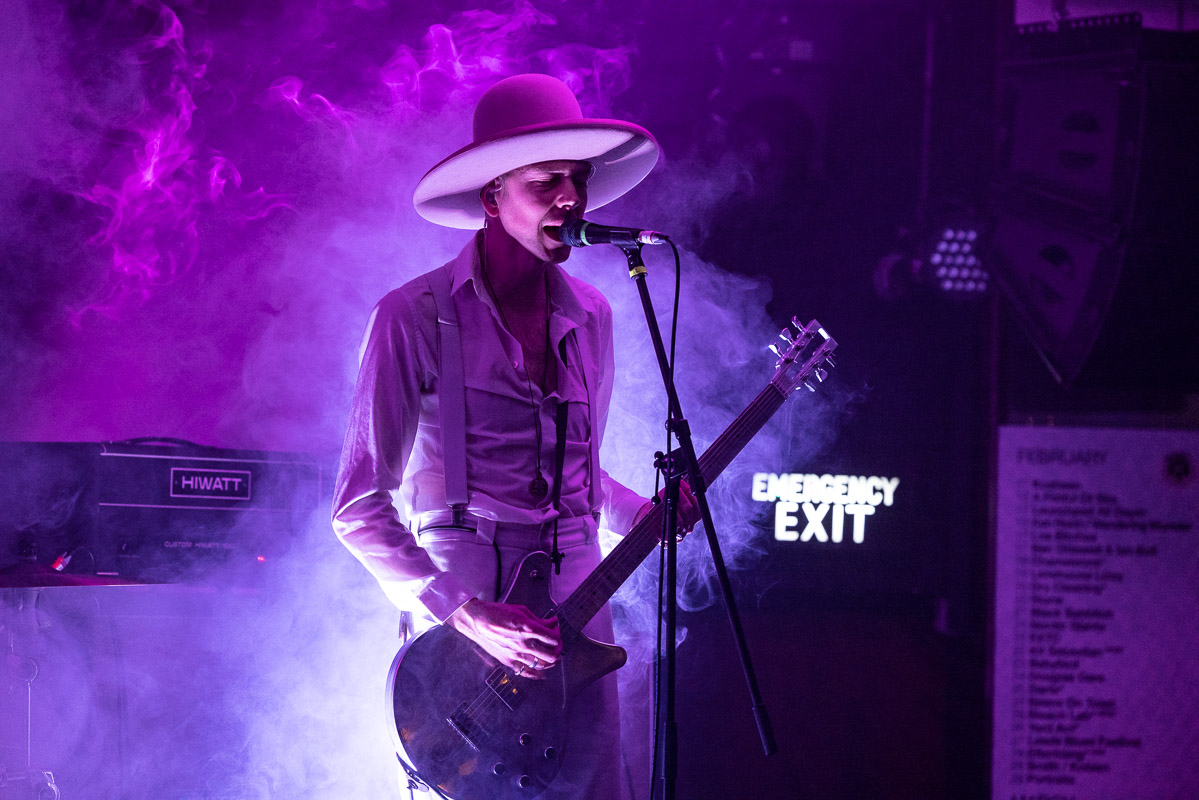 A large white cross affixed with lightbulbs adds to the drama as they open with the pummelling majesty of The Gospel. Park sings backing vocals while effortlessly playing two synths at the same time. Nernes has the raspy, rock ‘n’ roll sneer absolutely nailed. It’s clear we’re in very safe hands. The Rule Of Silence channels the band’s brooding, gothic sensibilities while Maldoror’s Love delivers a satisfyingly heavy, classic rock riff. The snarling Kinks Of The Heart may be one of the most exciting rock songs I’ve seen performed in quite some time.

Årabrot are a band that truly understands what it takes to make rock with real raw power. The kind of heaviness King Buzzo himself would approve of. A cover of Sinnerman starts with Kernes singing acapella before the drums kick in and the whole thing takes off. Ecstatic catharsis. The three-piece deliver a set bursting with passion and a healthy dose of outsider spirit. Their dark image is beautifully offset by the presence of their young daughter; ear defenders on as she dances in the crowd and calls out to her parents on stage. For Årabrot, rock ‘n’ roll is a family affair. 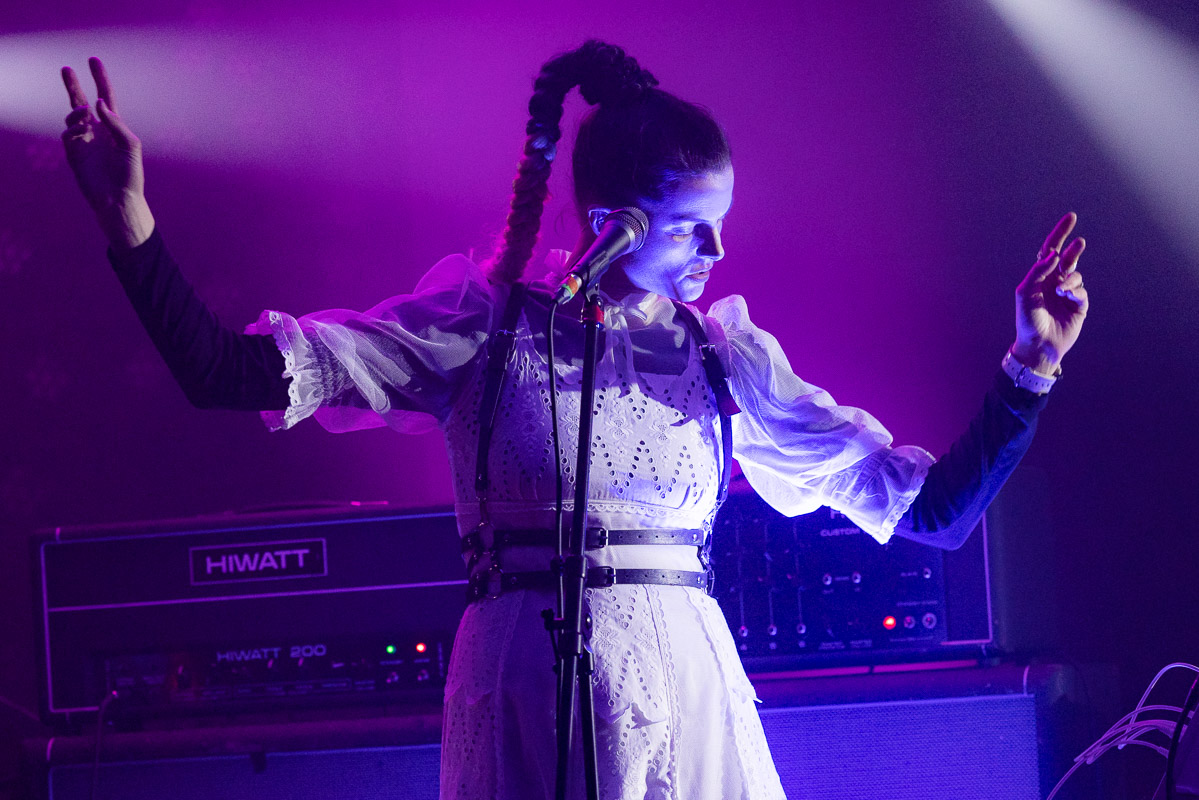 There’s an element of mystery surrounding Nordic Giants. Shrouded in darkness and dressed in what appear to be ceremonial headdresses, the post-rock duo like to let their music and the visuals do the talking. The compositions are accompanied by an array of stunning projections and short films, cast onto the wall behind them and onto a smaller screen at the centre of the stage. The room fills with smoke and the entire Brudenell Social Club is lowered gently into the band’s world. The audience patiently waiting for the gifts of sound and vision.

They open with Philosophy Of Mind, a deeply atmospheric composition that sets the tone for the rest of the evening. “The mind is free” comes the snippet of sampled speech as the piano, drums and effects gradually bloom into something utterly majestic. Cartoon images of our self-obsessed, celebrity worshipping, medication scoffing, consumerist eutopia play on the screen followed by visions of sublime celestial lights. The message is a familiar one yet highly effective. Like Funkadelic, Nordic Giants want to free your mind. 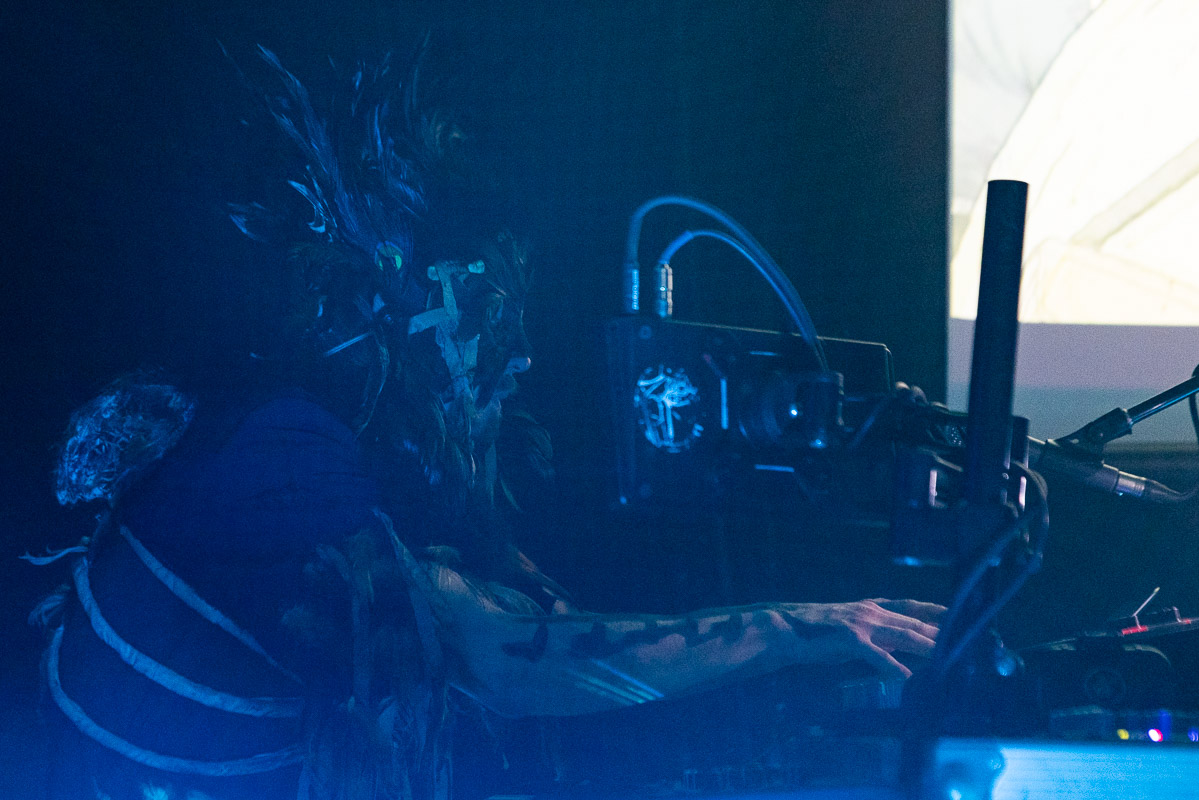 The duo produces a sound that far exceeds what you might reasonably expect from two people. One giant sits behind a piano keyboard/ synth while his brother in sound sits behind a drum kit. When the song calls for it, they slip off to add flurries of trumpet and guitar (played with a violin bow, no less). Nordic Giants won’t be taking any prisoners, they’re here for our hearts and minds. Tonight, we’re putty in their hands.

The whole show feels incredibly well planned, as the music works in perfect time with the visuals. As the drama on-screen escalates, so does the music. Said visuals include different styles of animation from a variety of artists and a full short drama called The Last Breath. One part gig, one part art installation. The visuals help provide a loose narrative that takes in life, death, humanity and humour. Each film feels like a chapter in a thoroughly absorbing book, the kind you simply can’t put down.

The melancholic Faceless is proceeded by words appearing briefly on the screen; consume, hate and greed. With Alex Hedley’s soaring pre-recorded vocals, the track evokes an immensely affecting sense of world-weariness. If Årabrot are all about destroying the world then Nordic Giants are about rebuilding it. Hope and determination in the face of insurmountable odds. Reaching out into the venue via the universal language of sound and creating a rather memorable shared experience.

This message of hope comes across beautifully with Together. The gorgeous instrumentation is accompanied by a suitably stirring speech by Martin Luther King. “We must rapidly begin to shift from a thing orientated society” begins Dr. King, “to a person orientated society”. Silhouetted in the dark, the duo takes a silent bow at the end of the performance. If we weren’t already standing, I’m fairly sure they’d receive a standing ovation. A special performance by a duo that really understands the profound effect that music can have.