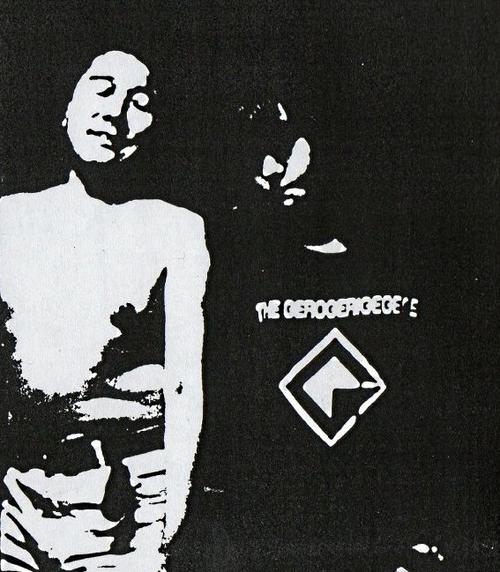 For those who don’t know, The Gerogerigegege are a band who attempted to take music to it’s most extreme point. A tribute album has been dedicated to them, which is trying to kind of “continue their tradition”. For Louder Than War, Sunny Baglow has been talking to the curators of the compilation, check out why they’ve done this below.

The Japanese underground in the ‘80s and ‘90s was characterised by dissenting cultural freedom. Bolder than Ballard, and more shocking than Salò, Japan’s music scene at the tail end of the century was infamous for providing its country’s thrill-seekers and cultural misfits with their own Grand Guignol of experimental art. It’s actors, the likes of Merzbow, Hanatarash, Hijokaidan and Incapacitants, were Japan’s answer to the poe-faced industrial innovators of the West, channelling raucous punk ferocity via pummelled electronics, found objects, flurries of contact mics, bulldozers, and rough-hewn vocal chords. While many of these artists have found continued success as influential players in the pantheon of experimental music, few hold as much infamy and mystery as The Gerogerigegege.

Formed in 1985, The Gerogerigegege were an ensemble of outsiders, eccentrics, sexual exhibitionists and musical bohemians led by the group’s sole continuous member, Juntaro Yamanouchi Over a myriad of obscure LP, CD and tape releases, The Geros launched a constant all-out war against all forms of music and art, with their records not only housing the cacophony of noise to be expected from Japanese experimental music at the time, but incorporated performance art, satire, sexuality, parody, and self-abuse into their music. In a 1994 interview on MTV’s 120 Minutes, fellow noise pioneer Masonna described the genre as his “own personal expression of rock music”. If rock was truly the genre most synonymous throughout the 20th century for rebellion and revolution, then The Geros took this statement and pushed it to the nth degree.

Throughout their lifespan, Juntaro and his ever-changing troupe of cultural abortions received wide notoriety for their actions in the noise scene. Some of their most eccentric antics include hosting a release show to lure unsuspecting fans with the promise of a new record, which ended up in Juntaro setting the majority of the records ablaze in an impromptu bonfire, followed by bandmate Gero 30 publicly masturbating on cue. The “Art Is Over” tape, another infamous “record” consisted of a severed octopus tentacle in a cassette box. Destructive, surreal and belligerent acts such as these have been read by loyal noise devotees in a multitude of ways which only seem to heighten the mystery surrounding the nature of the band. Either a parodical strike against the supposed pretentiousness of experimental music, or an attempt to push art to its most extreme, transgressive conclusion. With the band grinding to a halt in the early ‘00s, and Juntaro going missing for over a decade and rumoured dead or institutionalised, The Gerogerigegege left behind a fascinating legacy which continued to captivate fans of experimental music long after their breakup.

“Initially we just kinda started this thing off as a joke. Like, ‘imagine making a tribute album to The Gerogerigegege, that’d be hilarious’”, says M. “We posted it online and only after people actually started to participate on this thing we started to take it a little more serious. For the most part this album is just supposed to be fun, there’s no real clear purpose to it other than that if you ask me… personally I love The Gerogerigegege so yeah, it’s not a complete joke of a release. I hope more people see the humor in their music through this.” N continues in stating the sardonic appeal of the record, “The Gerogerigegege have always been fun. That’s all this release is.”

When initially putting the record together, the two label owners opted to create more of a homage than a “covers” record. “It’s more like “this cover kinda sounds like the original”, states N. “Like that cover of ‘Shaking Box Music’, that was never a song The Geros recorded. It was released as a metal box full of empty cassette tapes and the instruction to shake it to make your own noise. Someone recorded themselves doing that. A lot of these covers sound completely different from their original counterpart, and I believe that’s the way it should be. The Gerogerigegege were an incredibly varied band and I think that by releasing the compilation as it is, with genres and sounds all over the place, it’s a great homage to their own career.”

Transgressive musicians often earn a zealous cult fanbase for their abnormality and/or extremism. M argues that Juntaro and The Geros however offer something that many other cultural transgressors do not. “The main difference between people like G.G. Allin and Juntaro is that G.G. Allin only really was about the stage antics. If you have no experience with his on-stage presence he was just a pretty straightforward punk artist. You can listen to Allin’s ‘Bite It You Scum’ and have a good time, it’s a pretty catchy song. But if you put on any Gero record you’ll have a hard time to figure out what exactly they were going for. I think that’s what really sets them apart, even from other noise artists from the era. I think it’s hard to emulate their attitude through a cover record. To me The Gerogerigegege always had this sense of ‘are they fully aware of what they are doing, or are they actually not fully sane?’. Emulating that in a tribute would be impossible, because you need to put some active thought into covering their material.”

N expands on this sentiment: “The only way you could really accomplish a good Gero compilation would be to use little effort – if you overthink things you’ll lose out on the enjoyable factor. I’d say that there was no emulation of who they were in this cover album. If you’re emulating something like GG Allin or The Gerogerigegege and not doing anything to change it, it’s not interesting.”

It is, however, very easy to argue that the purpose of Art Is Over is all for naught, when you consider the popular belief that the entire ethic of The Gerogerigegege was to mock experimental art and the culture surrounding it. The two curators naturally disagree, with M stating how the first few Gero records “have a pretty ‘serious’ vibe to them”. N continues: “They seemed to be more of just a band that existed in Japan’s fetish scene. With regards to our tribute album, I’m sure it goes against their ‘beliefs’ and that Juntaro could give less of a shit that it exists, but it wasn’t exactly made to mimic the ideals of The Gerogerigegege.”

Many critics often consider wearing your influences so proudly on your sleeve to be rather passé. The two wholeheartedly disagree with this statement however, with the label’s ethics continuing The Gero’s nonconformist ideals. “I honestly love The Gerogerigegege and I think that naming our label after one of their songs was actually a pretty solid tribute to them to begin with. There’s been a lot of examples in music where entire band names are taken from other people’s songs, like Radiohead for example.” N continues, “I don’t think it’s so bad to have your influences shown so brightly. I mean Radiohead are clearly inspired by Muse, but you don’t see anyone shitting on them.”

Much like Anal Beethoven respectfully show their influences in their art, The Gerogerigegege themselves brazenly displayed their own influences all across their releases and live performances. Most famously, the band continuously paid homage to The Ramones, from performing their own indecipherable cover versions at live shows to producing a phoney Ramones album to fool unsuspecting buyers into hearing their cacophonous noise (the record in question is 1988’s Showa, consisting of roughly forty minutes of a couple engaging in intercourse). Like The Geros worshipped The Ramones, M and N reflect on what the band would think of their fittingly-monstrous display of musical reverence.

“I’ve spent the past 2 days trying to find someone who can get me in touch with Juntaro, I really wanna send him one of the tapes. I’ve put my hopes on Dee Dee Gero since he has a YouTube channel, but I can’t seem to contact him for some reason.”

“Who knows. I mean, Juntaro also just disappeared for a decade. He might show up on the new record if it’s ever released.”

“As much as I want to hear new Gero material, I think the best thing to do is to not release the new record. It’s the ultimate way for Juntaro to mess with his fans.”

“Yeah, just announce a record after 10 years of being presumed dead and never release it.”

“I think that’s the message that Juntaro expressed most in his music.”

“Art is truly over.”

All words by Sunny Baglow. This is Sunny’s first piece for Louder Than War, when he’s done more there’ll be at his author’s archive. You can find more writing by Sunny at his website. Sunny can be found on twitter as @sjbaglow.