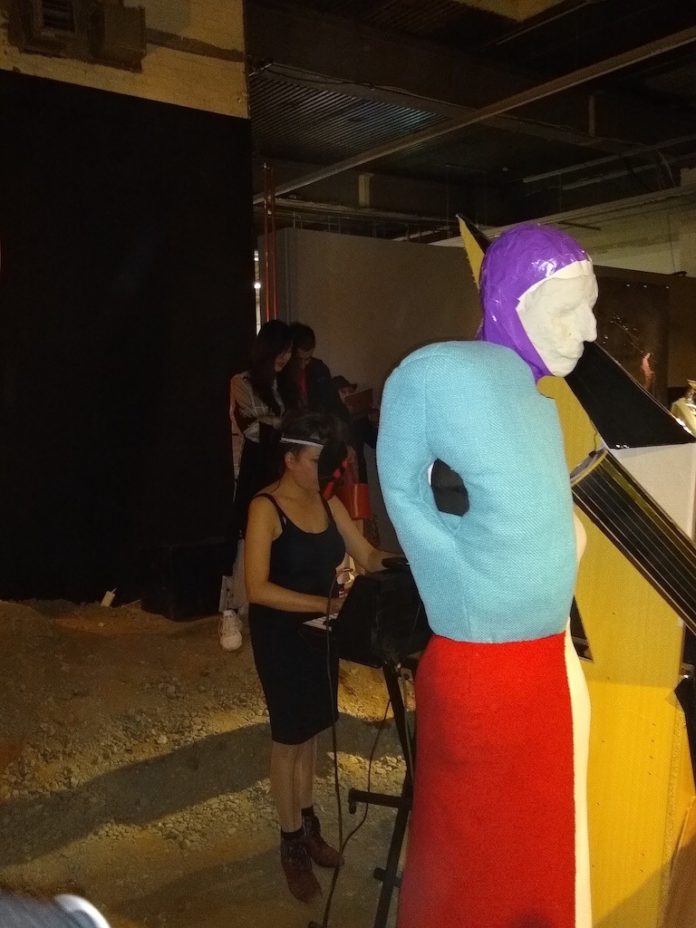 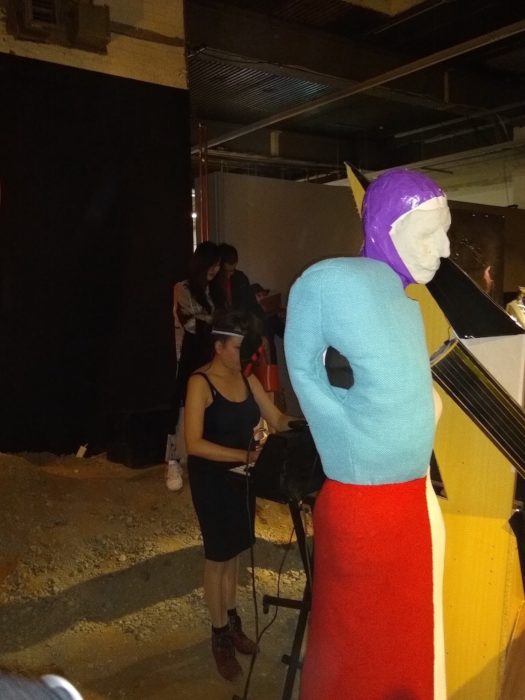 The ICA’s main gallery is transformed by mounds of sand and rubble, showroom dummies, inflatable globes, and golden spinning spheres. At the centre of the room, five dancers move beneath a giant sheet, with only their faces visible. They are accompanied by a multi-layered electronic drone produced by two musicians, Nohe Noshe, who play with their faces obscured by reflective disc-like masks. Tonight is the opening of a retrospective show by the Berlin-based art collective Honey-Suckle Company. The duo behind Nohe Noshe are two of its founding members, the artist Peter Kisur and Eleni Poulou, the DJ and musician best-known known for her work with The Fall between 2001 and 2016.

Honey-Suckle began life in 1994 in a house-share in post-unification Berlin. Poulou was born in Greece, Kisur in Croatia. Poulou tells me Honey-Suckle was all about takingyour own identity, without worrying about limitations. They would improvise their own outfits from gaffer tape, children’s toys, hand-painting their T-shirts and making masks. Poulouand Kisur were both emigres, creating their own identities in a city that was also trying to reinvent itself. The exhibition features many of these clothes, including a hand-painted T-shirt by Poulou that reads, “The Most Chemical Influence: Gender Pretender”, a slogan that reflects the ambiguous take on gender and identity in the band name, Nohe Noshe. In the second floor gallery space of the ICA, beside an eerily immersive all-white room, there is a vase with 3D projections of Poulou, Kisur and two other members of the Honey-Suckle company dancing around its rim. They are only a few centimetres tall, cavorting in costumes made of newspaper carrying headlines about Brexit.

Nohe Noshe is a collaboration that spans twenty-five years. Kisur tells me that when Poulou moved to England to join The Fall, they continued to share ideas over the telephone, and began working together in earnest on her return to Berlin in 2017. They have a full diary for the next six months playing galleries and museums around the world. Much of their music is based around long-form electronic drones, a description that barely captures its musicality or richness, with all of its modulations, and harmonies. The duo build up layers of sound on keyboards, a harmonium and shonky, improvised electronic devices, creating an immersive soundscape that nevertheless always feels focused and precise. As the dancers slink away beneath their sheet, the audience turns rapt to Poulou and Kisur, enigmatic figures behind their reflective masks. Poulou wears a cocktail dress with red seam-like stripes painted on the front of her legs, and Kisur in an elf-like knitted hat and his shoes transformed into fancy slippers by pinning exotic flowers to the toes. They are still following the command to take their identities, twenty-five years into their friendship and collaboration.

Honey-Suckle Company Omnibus runs at the ICA until January 12, 2020.